Trump's crafty move on Iraq: His war comments allow conservatives to move past the Bush years while saving face

Trump's Iraq comments were initially surprising, but they give conservatives a way to put Bush years behind them 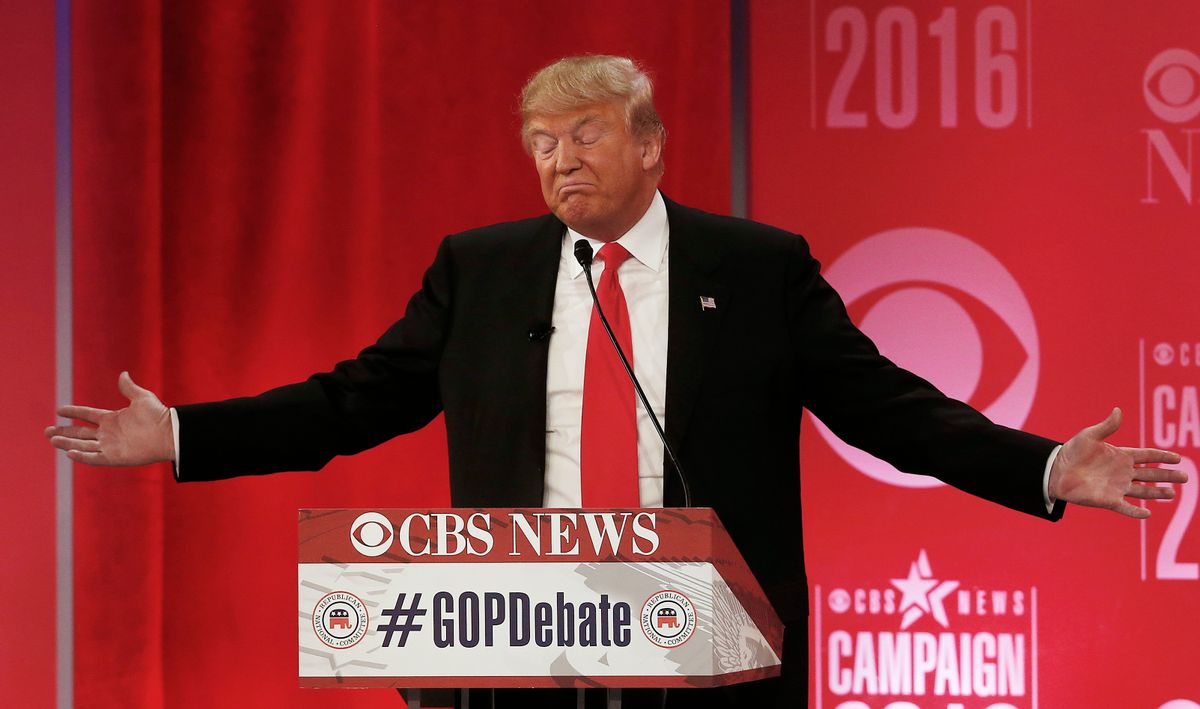 Most of Saturday night's Republican debate held by CBS in South Carolina was more of the same stuff we've seen in the previous eight debates, with Donald Trump insulting people and lots competitive right-wing posturing. But there was one moment that was unexpected, when Trump went after Jeb Bush by attacking his brother, former President George W. Bush.

Trump accused the former president of lying about weapons of mass destruction in Iraq and called the war "a big, fat mistake." Trump also sneered at Jeb Bush that the "World Trade Center came down during your brother’s reign." These comments range from demonstrably true (the 9/11 comment) to arguable (there's no proof that Bush knowingly lied, but his administration did heavily massage the evidence to get their preexisting desire to start a war in Iraq). Perhaps unaccustomed to hearing reality-based rhetoric during their debates, the Republican audience booed Trump loudly for this.

But does that booing actually mean that this stance, which Trump has been continuing to push in media interviews, will hurt him in the polls? As Salon's Sean Illing points out, it should hurt him. George W. Bush gets high approval ratings in South Carolina, which is holding its Republican primary on Saturday, and, as a general rule, Republicans don't enjoy admitting that the last president they voted into office was one of the worst presidents in American history.

And yet, as Illing points out, it doesn't seem that this is budging Trump's numbers. "There are no sacred cows left for Trump to slay," he writes.

Heather Digby Parton of Salon agrees, writing, "Trump’s appeal all along has been based upon his taking on sacred cows. That he does it to their faces reads as courage."

But I would argue that there's more going on here than just the fact that Trump's supporters are able to rationalize away anything he says, though that is undoubtedly a huge part of this. There's also a possibility that Trump is giving conservatives exactly what they need right now, which is a way to move on past the Iraq War.

As with most things conservatives support, from the Vietnam War to bans on same-sex marriage to support for segregation, there comes a time when a topic stops being "controversial" and instead a consensus forms that the conservative position was wrong. When this happens, conservatives usually have to find a way to reconcile their own positive opinions of themselves with the fact that they were very, very wrong. Usually this requires reframing the issue so they can keep preening self-righteously while quietly moving off the wrong opinion and hoping everyone forgets that they ever held it.

Once it became unacceptable to openly support segregation, for instance, the move was to push for "private property" rights, such as the right to refuse service to black people or to sell your house to them, that just so happened to uphold segregation. With same-sex marriage, the shift has been from openly opposing it to supporting the "right" of individuals to cite Jesus and interfere with the ability of couples to get married smoothly. Once it became undeniable that Vietnam was a losing cause, the right switched off to supporting the myth that POWs had been left behind, in order to retain a sense of righteousness.

But no such reframing has really emerged that allows conservatives both to let go of the Iraq War while maintaining a sense of self-righteousness around the issue. Republican candidates have offered up some distractions — ISIS! Benghazi! Iran has nukes! — but the problem remains: The tribalism of the right allowed them to support a war that was obviously a bad idea, and history will judge them for it. It's embarrassing and there's only so long you can deny the obvious before reality starts to seep in.

Trump offers a way out of this conundrum. No one is a more obnoxious anti-Muslim bigot in the race than he is, and yet here he is, denouncing the war as a bad idea. His stance gives conservatives a way to save face while carefully and oh-so-quietly admitting the war wasn't the best idea.

By repeatedly calling the war a "mistake" and focusing on the Bush administration's choices, Trump might be able to frame the Iraq War not as a failure of conservative ideology, but just one more example of why the Republican establishment is corrupt and needing of an outsider like him to fix it.

After all, Trump validates all the emotional reasons conservatives had for supporting the war — tribal loyalty, fear of terrorism, loathing of Muslims — while simply suggesting that the war was not the way to address these emotional desires. Just as the POW/MIA myth allowed conservatives to retain their hatred of the North Vietnamese while quietly admitting the war was a misfire, Trump has established a narrative for conservatives to admit they made a mistake without admitting what is wrong in their ideology that led to the mistake.

And he offers a way out that allows them to save face. They don't have to take back their vote for George W. Bush. They just need to not vote for his brother. It's a perfect way to let conservatives have it both ways, to reject the legacy of the Bush family without actually admitting that they were wrong to trust the Bushes in the first place.

Trump's move is smart in another way, in that he's subtly signaling that he's not as eager to head to war as the Bush family traditionally is. Talking to conservatives on this front is a delicate operation. The entire conservative movement is best understood as a bully that likes to talk tough and brag about how many fights he's won while actually preferring not to risk getting punched in the face. What they want is a politician who will talk tough and even brag about how tough he is, but they don't necessarily want to actually go to war.

It's not just that actual Americans, often Republican-voting Americans die in war. It's also that going to war means running a strong risk of losing that war, which the Iraq War is a stinging reminder of. It's better to talk a big game and pretend you're a winner, instead of actually trying to prove yourself and failing.

Trump gets this better than anyone. That's why his anti-war talking points are likely to work. He's calling out the Bushes for puncturing the illusion, for taking the fantasy too far by actually made good on all that war talk conservatives love to wallow in. Trump drew a bright line between candidates who understand that war works best when it remains in the realm of the hypothetical and those who are foolish enough to actually send troops in to fight a losing cause. It's a message that likely resonates with voters and why his posturing on this issue probably won't hurt him, and may even help.