Conservative war hypocrisy: Donald Trump is getting celebrated for saying the same thing that ruined the Dixie Chicks

Trump's Iraq War criticism nearly identical to what Dixie Chicks said a decade ago, yet he's leading the primary 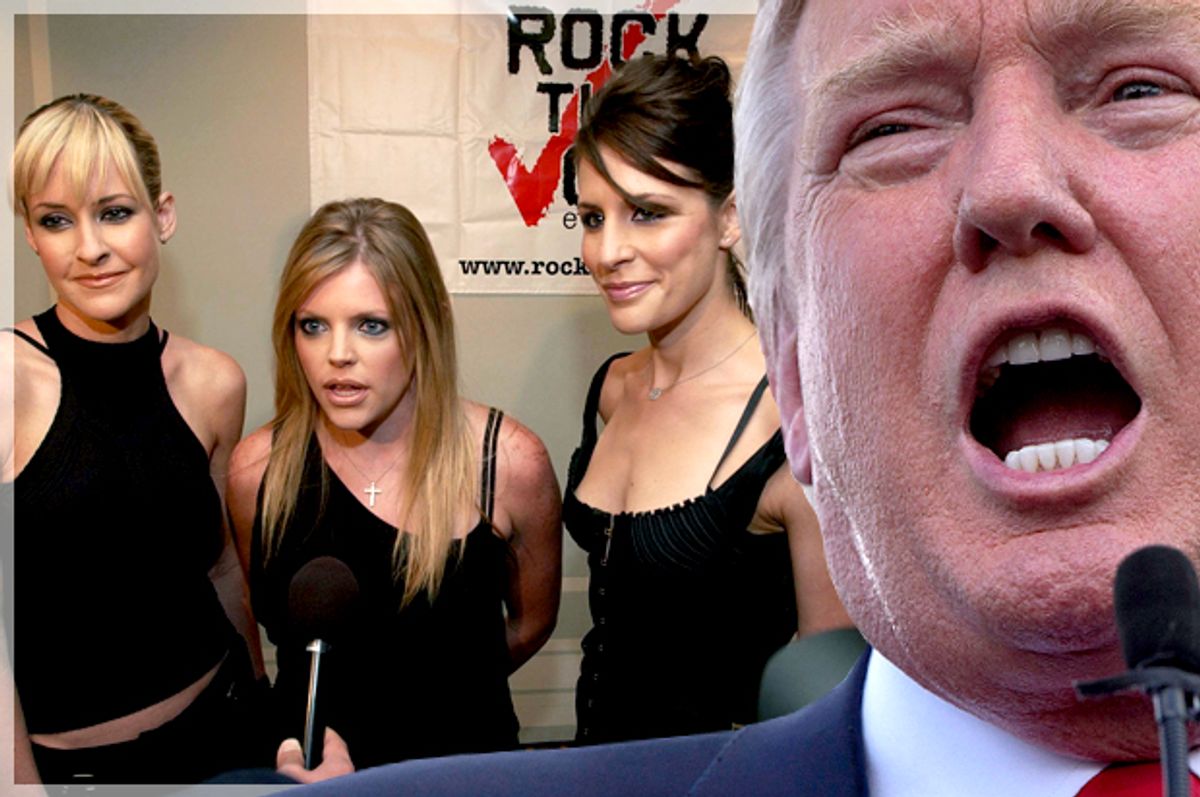 In July of 2003, the Dixie Chicks, a platinum-selling Texas-based country band, was playing a show in England when lead singer Natalie Maines decided to address the contentious debate over whether or not the United States should invade Iraq. "Just so you know, we're on the good side with y'all," Maines told the London audience. "We do not want this war, this violence, and we're ashamed that the president of the United States is from Texas."

Looking back on what happened, it's almost hard to fathom how completely out of control the conservative response got. After all, it was hardly a surprise that the Dixie Chicks were liberal, having released songs denouncing domestic violence, celebrating female sexuality and yes, even songs with pacifist themes. And of course, Maines was right, and not just in retrospect. It was obvious to anyone who wasn't caught up in war fever at the time that the Bush administration was relying on disingenuous arguments in order to get a war that he and his advisors wanted for purely ideological reasons.

But announcing that the emperor isn't wearing clothes is never a popular stance, and the Dixie Chicks became the biggest scapegoats of the entire war mania season: Bonfires of their records were held across the country, DJs who played their music were fired, their songs fell off the charts and basically, they were ruined. They put out one more record that sold well, but the stress and the loss of reputation in country circles eventually led to their collapse.

The whole incident is worth recounting because here we are, almost 13 years later, and the lead in the Republican primary race, Donald Trump, is saying far more incendiary things about both George W. Bush and the Iraq War than Maines did, and not only is not hurting him in the polls, but may even be helping him.

During the CBS debate in South Carolina, Trump openly accused Bush of lying about Saddam Hussein concealing weapons of mass destruction to get us into Iraq. He's since softened a little, saying, "I don’t know if he lied or not," but "there are no weapons of mass destruction." What's astounding about all this is that Trump is basically right, something that almost never happens, even when it comes to his own historical record of opinions on the war.

Barring the development of mind-reading technology, we can't know whether or not Bush deliberately lied or not about weapons of mass destruction. But what is true, as Hillary Clinton helpfully reminded us during a Democratic debate, is that the Bush administration got war authorization by making promises that they'd let weapons inspectors do their job, and then they reneged on that promise, invading before the inspectors had a chance. Not only does that justify calling Bush a liar, but it suggests the administration was afraid the inspectors would prove there were no WMDs in Iraq, taking away the pretense for a war that Bush wanted for reasons that had nothing to do with WMDs.

The reason there was such a vicious response to the Dixie Chicks (and to other celebrities who spoke out about the war) at the time was to deflect attention from the obvious bad faith and manipulative moves coming from the Bush administration. Ruining the Dixie Chicks was part of a larger right-wing campaign to send a message: Any dissent, or even questions, about the Bush administration's willingness to cut corners and violate trust in their rush to war would be met with accusations of anti-Americanism, threats, intimidation, and possibly even the ruin of your career. The campaign was incredibly effective, and likely one of the major reasons that Democrats caved and extended Bush trust that he clearly didn't deserve.

Now the very same people, conservative voters, who would rain ruin upon you back then if you dared even hint at criticizing Bush, are now rushing to vote for a man who accuses Bush of lying, or at least distorting evidence, to get his ill-advised adventure war in Iraq. What's changed?

Part of it is the passage of time, of course. But mostly it goes back to the tribalism that defines conservative politics. Donald Trump is one of theirs: A bully, a bigot, a misogynist, and a self-identified member of the conservative tribe.

The Dixie Chicks, in contrast, were perceived as a subversive force, threatening male dominance with their musical chops and refusing to apologize for it by putting out explicitly feminist songs. (I hung out at a country bar sometimes during this era, and men would always whine that we were "man-haters" when my friends and I played "Goodbye Earl," a song that apparently offends by suggesting that wife-beaters are worthless scum.) The attacks on the Dixie Chicks worked, too, helping end a revivalist period in country music and ushering the end of the corporate-friendly "bro country" that is as uninspiring as it is sexist.

Conservatism is and has been, for a long time at least, far less about policy specifics and far more about this kind of tribalism. In a remarkable piece for The New York Times, Trip Gabriel interviews Trump supporters and finds them praising Trump for saying exactly the sort of things that would have brought hellfire on the heads of liberals just a few short years ago, about how you've "got to ask tough critical questions" and how they don't like being "dictated to from Washington." You know, exactly the sort of sentiments that would get you called un-American in 2003.

This inconsistency doesn't feel inconsistent to the right, however. The support for the war never had anything to do with a sincere belief that Hussein was a threat that had to be dealt with before weapons inspectors could do their job. A Republican wanted the war, liberals opposed it, and that's all they needed to know.

"The issues themselves have only ever been important as a boundary marker, a way to delineate Us from Them," Adam Lee at Daylight Atheism writes. The war's salience as a boundary marker has declined and so conservative voters aren't particularly worried about justifying it any longer.

What hasn't changed is this all-consuming hatred for all things liberal, especially anything perceived as a threat to white Christian male dominance. The Dixie Chicks were right about the Iraq War, but they were women and liberals who talked back, and that ultimately why they were such a threat. Trump isn't a liberal or a woman who is talking back — on the contrary, he relishes any opportunity to insult and degrade women he thinks don't know their place — and that, ultimately is the only thing that really mattered.