Donald Trump is bulletproof: Why his call to Colbert last night should scare the left

Comics can mock him all they want -- Trump shakes off late-night jokes with his weird anti-charm, and it's working 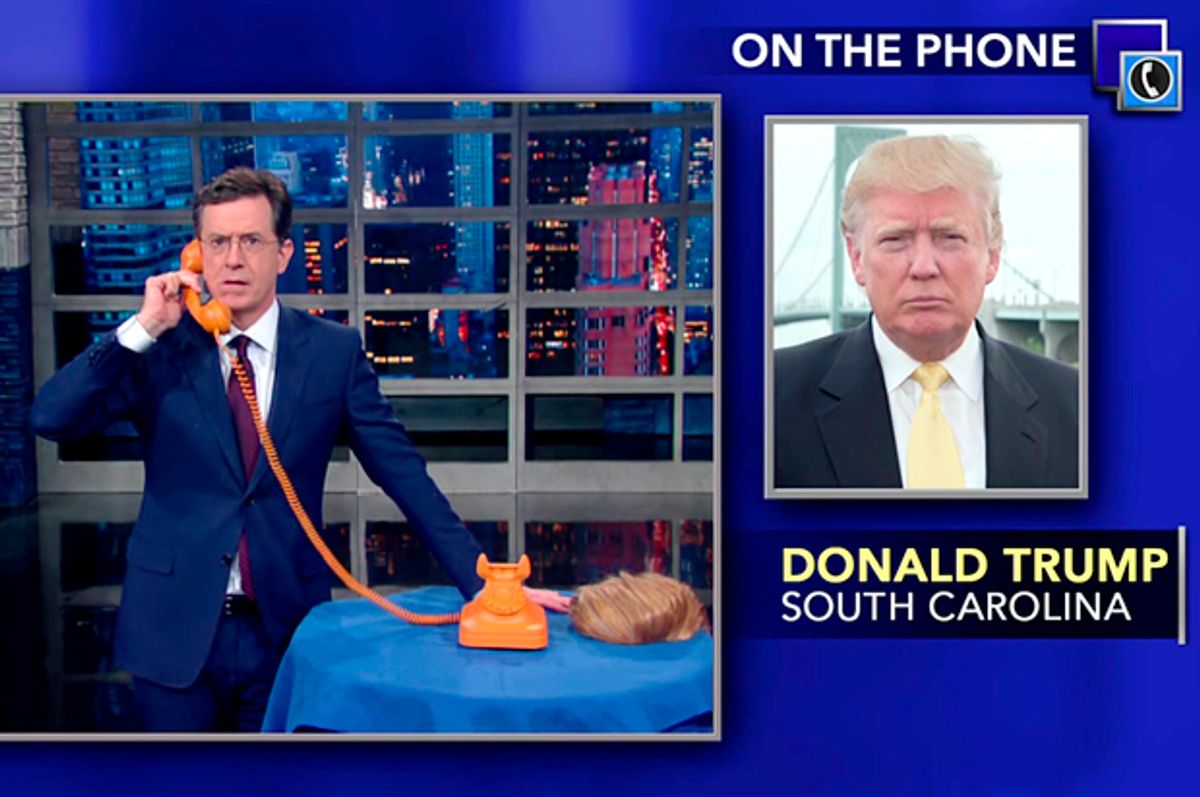 Political observers on both sides of the aisle have been baffled for months now, as Donald Trump has refused to fade. A man with few qualifications for the presidency, who has insulted whole swaths of the country – women, immigrants, Muslims – still seems to be not only politically alive, but on his way to his party’s nomination. He was supposed to be a joke, a one-liner, but he’s riding high.

Trump is puzzling in another way, as well: He has not turned into the target for comedians that many thought he’d become. Or rather, comics make fun of him -- his hair, his accent, his bluster, his extreme ideas -- and while they might get a few laughs, nothing substantial happens. At the very least, nothing cuts into his popularity

The New York Times' James Poniewozick gets at the paradox:

"Whatever anyone thought of Mr. Trump as a candidate, the consensus was that he would be a one-man stimulus program for comedians. He’s given them plenty of material, but little of it has stuck. As Mr. Trump has defied conventional politics and confounded conventional pundits, so has he frustrated conventional satire."

It’s not for lack of trying. Jimmy Fallon has dressed up like Trump and brought the “Fuller House” cast out to mock Trump’s self-pity, triumphalism and verbal delivery. The Funny or Die version of “The Art of the Deal” turned into a brilliant parody complete with Johnny Depp. Trevor Noah and Samantha Bee and everyone else -- including a cigar-chewing dog -- have all given Trump their best shot.

But the weird thing about Trump is that he has a sense of humor about himself. More than the other candidates – especially now that Chris Christie is out of the race – he laughs at his own persona. Somehow, he’s in on the joke in a way that Hillary Clinton, Bernie Sanders, Ted Cruz, and Marco Rubio never seem to be. And so he's become bulletproof.

Trump made this clear last night when he called in to "The Late Show with Stephen Colbert." This should have allowed Colbert – one of the nation’s finest political satirists and the sharpest interviewer on late night – to skewer Trump hard. He set the bit up looking like he’d get the best of Trump, with an orange Trump wig on his bat phone.

But Trump’s call – despite drawing some boos from the crowd – ended up making Trump look, if not good at least, far from foolish. Or rather, foolish in the usual way. Somehow, Trump has found a way to inoculate himself from criticism.

With Colbert, Trump does it, weirdly enough, using mostly conventional elements. He makes fun of his own tie, he praises the state where he’s appearing, South Carolina, in his usual vague language (“It’s a great, great place”), and drops his comically familiar campaign slogan (“We’re gonna make America great again.”). Colbert brings up Trump’s tendency to work blue, and the billionaire developer explains, coolly, why he sometimes uses sharp language. And it makes utterly no sense.

"I've got a suggestion,” Colbert offers. “Why don't you have a swear jar? Every time you say a bad word, you put a billion dollars in it.” The crowd goes wild. Trump sheepishly agrees. “I’m gonna do that, I like that.” But he’s not defeated. He seems, oddly, like a good sport.

When the two discuss politics, Trump mentions that he would, if he were president, push for a new Supreme Court justice to replace Antonin Scalia even if it was an election year -- and then contradicts himself by saying that President Obama should wait for the next president to do it. (Colbert doesn’t call him on it the fact that this makes no sense, either.) Alright, sounds good!

The audience had its laugh and Colbert got some good lines across. But the strange thing is that Trump won the exchange. He was mocked, laughed at, and booed by the audience. “You’re not making any friends here, Donald,” Colbert said as the crowd groaned. He may not have convinced the liberals and progressives gathered in the studio. But for a lot of people watching on television, this came across as just riffing. For them, this was just fun. For Trump it certainly seemed to be.

Just as Kanye West and Taylor Swift manipulate their public presences, alliances and feuds, Trump appears to know exactly what he’s doing, too. He’s spinning us all – even Colbert.

What’s dangerous is that Trump can get in and out of an interview with someone as sharp as Colbert without being demolished. Colbert fans came out of this thinking their guy won, but Trump fans have every reason to think the same thing.

It’s not quite charm, but something more unusual, and more pernicious. If he’s elected, could Trump become the real Teflon president? Let’s hope we don’t find out.