Why are the GOP establishment and the D.C. press corps trying to revive Rubio 2016? Because he's all they've got 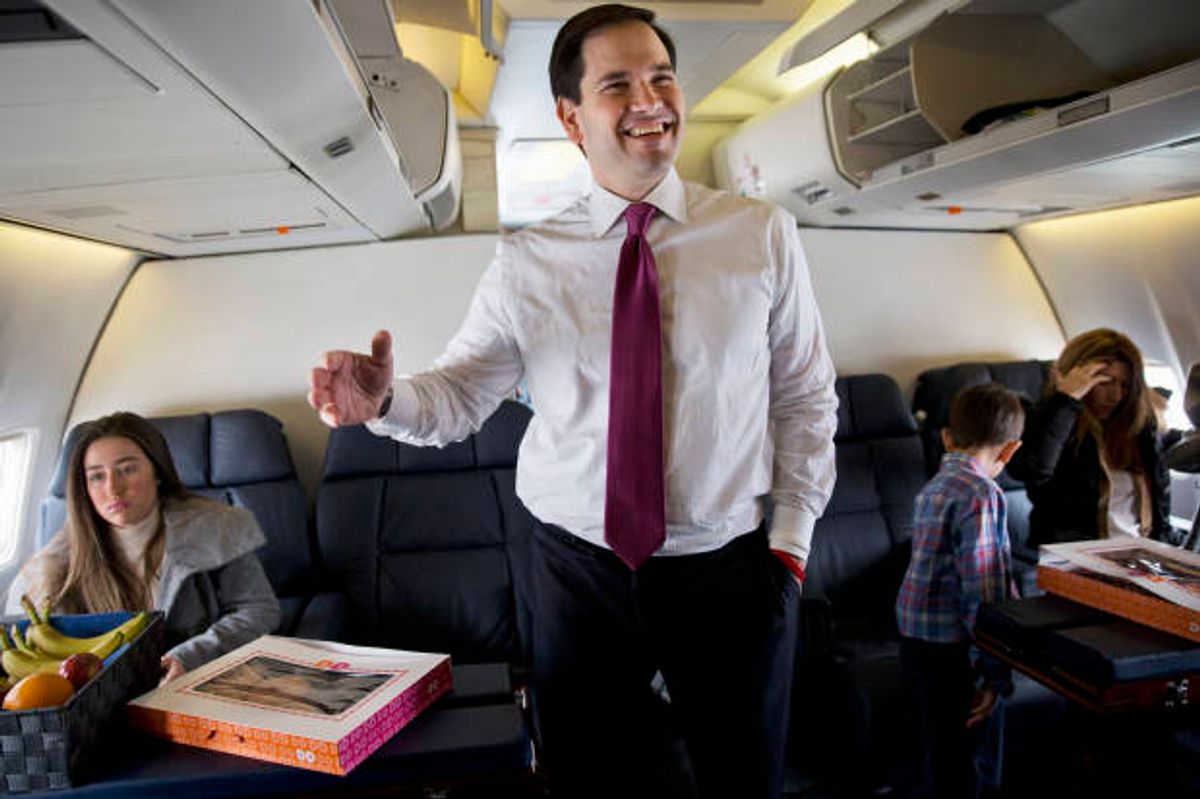 Here’s something I just did that you should not do for yourself: I typed “marcomentum” into Twitter, then proceeded to spend more of my all-too-fleeting time examining the results than I’d care to admit. This was not a pleasant experience, but I had my reasons.

They weren’t good reasons, mind you. (Or, at least, they weren’t good enough. Nothing could be good enough to justify watching this, which, yes, is something I have now done and can never undo.) I did not learn anything about Rubio that I didn’t know already. My impression of him as callow and insubstantial remains unshaken.

But the act was necessary all the same, because it is increasingly obvious that if Sen. Marco Rubio places second in the upcoming South Carolina primary, the GOP elite and D.C. press corps — a.k.a, Rubio’s base — will try to dispel the notion that his presidential campaign is kaput. Indeed, you can see the narrative congealing already.

For what it’s worth (not much), here’s how that narrative goes: After surviving a near-death experience in New Hampshire — politically, that is — Rubio has regained his footing and become more amazing, electrifying and inspirational than ever. If he can finish in South Carolina ahead of everyone besides Donald Trump, he can once again become the Great Electable Hope that anti-Trump GOPers everywhere can rally around.

For a perfect example, look no further than this Politico write-up, which, as New York University professor and media expert Jay Rosen noted, genuinely reads like something Rubio’s communications team devised after a few too many drinks:

The quick reboot, followed by a confident debate performance Saturday night (a CBS poll showed 32 percent of respondents thought Rubio won the night), has enabled Rubio to move beyond the “Robot Rubio” narrative before it overtook his campaign, giving voters curious after New Hampshire about which Rubio was the real one the confidence that his poor performance there had been an outlier ….

After a few listless days on the trail in New Hampshire after the debate, Rubio has regained his energy, confidence — and sense of humor. In describing his student loans, only paid off since he wrote his book, Rubio on Sunday delivered his standard laugh line that the autobiography is “now available in paperback.” Then, as he rarely did before, he broke the fourth wall and told the audience a secret about the performance mechanics of his routine ….

The spontaneous mix of laughter and thunderous cheers that erupted wasn’t that of an audience politely humoring a candidate — it was the sound of a connection being sealed.

It is, as you may have noticed, basically the exact same narrative as the one Rubio’s campaign nurtured heading into New Hampshire — before that disastrous debate.

Will it work? Probably not. Rubio’s polling third in South Carolina, albeit just a hair’s breadth behind Sen. Ted Cruz. But even if Rubio manages to jump ahead of the Texas senator — who is currently busy, fending-off Trump’s threats to sue him — the distance between him, Jeb Bush and Gov. John Kasich will probably be minimal, and not enough to persuade either man to drop out and cede to Rubio the anti-Trump/Cruz mantle.

That’s not the question that interests me right now, however. Rather than the trustworthiness of the narrative itself, what seems noteworthy about it is that it’s being so artlessly reapplied to Rubio. After coming in second-place in New Hampshire, Kasich, as far as the media is concerned, might as well not exist. Jeb Bush, meanwhile, only really gets attention when he’s screwed up.

If there was any doubt, in other words, that the anti-Trump and anti-Cruz bloc of the Republican Party were all-in with Rubio, it should exist no longer. They’re going to get this man the nomination — or let the party die trying, even if it takes a brokered convention to do it. There is no other option; it’s Rubio or bust.