It's not about ideology: These are the voters the president needs to appeal to as he makes his case for appointing a Supreme Court justice 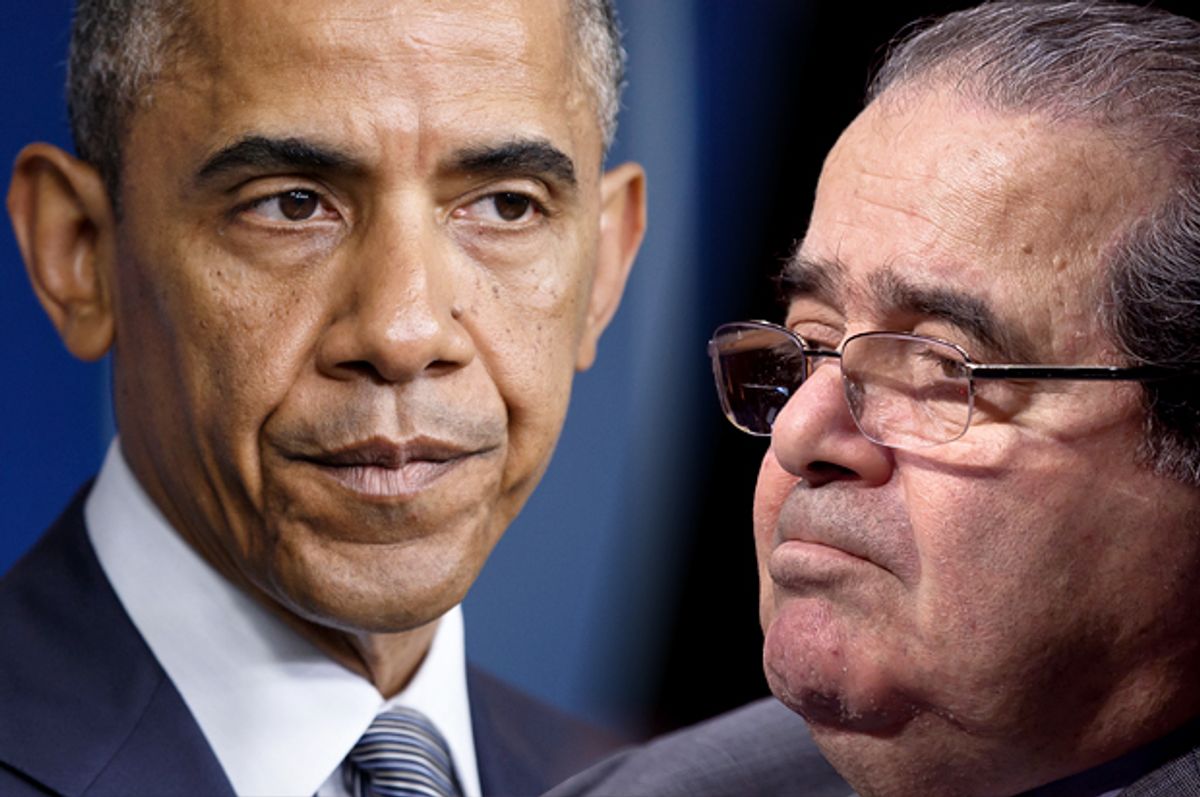 The intentions of the Senate Republicans and the remarks of the Republican candidates for president over the vacancy on the Supreme Court created by the death of Antonin Scalia present the Democrats with a golden opportunity to keep the White House and regain seats in Congress this year, and the big question is whether they will make good use of that opportunity or blow it.

Consider what the Republicans are saying. They are saying that, although President Obama has almost an entire year left in his presidency, and although the court has not only half of its current session left but a brand-new session opening in October, it is not President Obama’s rightful job to appoint a new justice to the court. They are also saying that, if he does make such an attempt, the Republican-majority Senate should automatically dismiss the nominee from consideration, in hopes that a president they favor will take office next year and fill the vacancy instead.

It is fully understandable, of course, that the Republican Party would have this desire, and it is not the die-hard conservatives in the electorate who can be persuaded to have any objection. After all, they want the court to be conservative, and the replacement of a conservative justice with a liberal one at this point in time would mean a liberal majority where there was a conservative one before. Since, for them, being conservative is synonymous with simply respecting the Constitution, and since Barack Obama is synonymous with wanting to destroy America, how could they ask anything else of the Senate Republicans?  In the South Carolina Republican debate, the candidates all played to this mind-set in varying styles, excusing themselves in the process from admitting that there was anything partisan about their stance. They claimed, moreover, to have precedent on their side.

But they don’t, and their stand is both totally partisan and totally contrary to the spirit of both democracy and the Constitution, and this is what the Democrats need to get to work explaining to the voters, and not just those voters who want a liberal justice in that seat. The Republicans are not just saying that, because Barack Obama is a Democrat, any justice he nominates will probably be liberal, and that the Republicans in the Senate should refuse to confirm a liberal. They are saying that, when Obama nominates somebody, they are going to have their minds made up not to give that nominee any consideration. And this can only be interpreted as a refusal to recognize Barack Obama as the legitimate president.

As we all know, many voters don’t think Obama is the legitimate president. The popular belief that he has a fake birth certificate and is thus not an American persists. Many voters, during Obama’s first year, did not want Obama going on the radio and telling their school-age children to study hard and not give up. It was not because they thought he would put socialist propaganda in his speech; it was because they did not want anyone telling their impressionable children to respect Obama as their president at all. For such voters, obviously, Republicans in the Senate and the campaign trail can’t possibly be anti-Obama enough.

But those are not the voters the Democrats need to appeal to. Nor is this about rallying the ideological liberal voters behind the importance of an Obama appointee being confirmed so as to protect gay marriage and Obamacare and reverse Citizens United. Yes, the Democrats will do that, but there is something completely different that they must do as well. There is a whole other set of voters President Obama and the Democratic senatorial campaigns need to reach out to.

Who are those voters? Quite simply, they are the voters who went for Obama in 2008 and 2012 but who have voted for Republicans in other elections and would consider voting Republican this year. They include voters in six states that, this year, have Republican senators coming up for reelection but whose electoral votes went to Obama in 2012. They include voters in other states, as well, who are represented by Republicans in the Senate but who also voted for Obama.

Were these voters, when they cast their ballots for Obama in 2012, voting for Obama to serve for just three more years and then stop, and let the country be in a state of presidentless limbo through 2016? John Kasich’s remarks in the Feb. 13 Republican debate certainly implied as much. After blaming Obama for the dividedness of the country today, Kasich implicitly called upon Obama to impose on himself the penalty of not thinking of himself as the president this final year, and he explicitly endorsed the position of the Senate Republicans who clearly do not recognize him as such.

But, again, some Senate Republicans were elected with the help of some Obama voters. Such voters, even if some of us may think they’re mistaken here, think that the Democrats and the Republicans produce the best policies when they keep each other in check. Such voters, it is reasonable to infer, would want the Senate Republicans to look carefully at the record of any Obama judicial nominee, and reject any nominee whose record smacks of any great excess of liberalism. They would never ask the Republicans in the Senate to confirm Obama’s nominee automatically, sight unseen.

But to reject his nominee automatically, sight unseen? That is another story. That is a refusal to recognize the fact that Barack Obama is the president. It is a refusal to honor the “advice and consent” clause of the Constitution that calls on them to work with the president in the appointment of justices. And, it is a power-packed slap in the face to all those voters who, even if they voted for Republicans in the U.S. Senate, also voted for Obama. After all, they elected Barack Obama as their president for a term that expires during the first month of 2017, not the first month of 2016.

The Democratic Party needs to stress this point. It is a matter completely separate from ideology, one rather of decent conduct and respect for the Constitution and for the voice of the voters. Using this for a talking point, the party must launch a massive and well-focused campaign to put both the Republican nominee and the Senate Republicans, especially those who face uncertain reelection this year, on the defensive about this blatantly unethical, unconstitutional and undemocratic behavior. The candidates in the South Carolina debate have furnished the Democrats with splendid sound-bite material, not merely by disapproving of Obama’s performance as president but by implying that he has somehow forfeited his right to act as the president at all for his final year. And when Obama nominates a justice and the Senate refuses even to hold confirmation hearings and bring the nominee up to a vote, the party needs to rally voters in states that Obama won to pressure their Republican senators to fulfill their constitutional duties in giving a fair hearing to the nominee, and punish those who come up for reelection in November if they do not.

For this cause, it would be nice if there were enough Senate seats up for grabs to make possible a Democratic 60-vote supermajority in this next election. Unfortunately, there are not. However, there are enough such seats in the Senate that, if the Republicans do not give the nominee a fair hearing and the voters respond accordingly, the Democrats can reclaim the majority of seats and, while Obama is still the president, use the leverage of threatening the nuclear option (abolition of the tool of the filibuster for Supreme Court confirmations) to coerce some of the remaining Republicans to play ball with them.

Again, it must be emphasized, this is a separate and distinct campaign from any that emphasizes the need for a liberal rather than a conservative justice. The Democrats must appeal to centrist voters, without reference to such ideologies, on the principles of responsible legislative behavior and decent respect for the presidency. A few well-timed prime-time addresses to the nation from the president, with those centrist voters firmly in mind, will be a necessary part of this pitch.

Republican candidates for both the presidency and Congress, when they choose to pander to those Americans who consider Barack Obama an illegitimate president, should by all means receive and enjoy those people’s votes. They should not, however, have an easy time garnering anybody else’s vote. It is the job of the Democrats now to see that they do not get it.