Some criticize "The People v. O.J.'s" Kardashian Kids feature as self-indulgent, but it's smarter than that 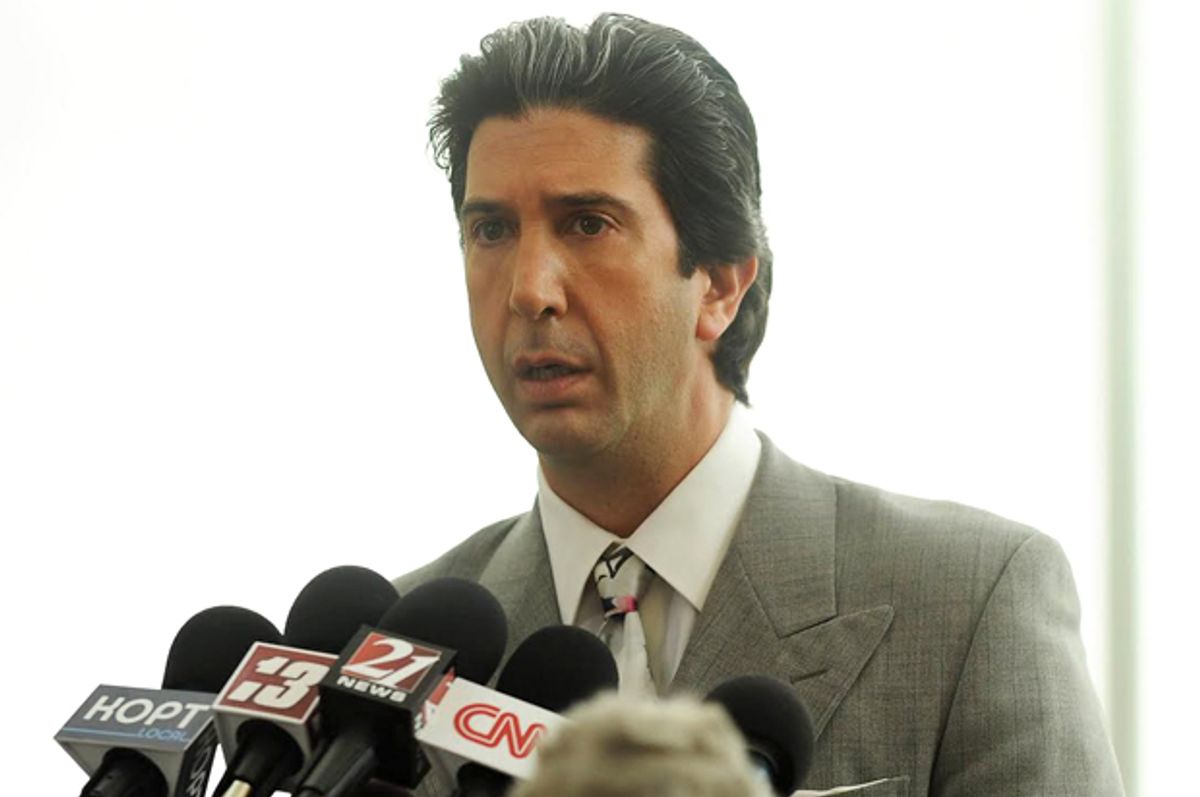 One of the oddest little treats to FX’s “The People v. O.J. Simpson: American Crime Story” is the involvement of one of 2016’s most famous families as a sideshow to the events of 1995—the Kardashians, headed by now-deceased Robert Kardashian (David Schwimmer, in the show), who in addition to being the dad of Kim, Kourtney, Khloe and Rob, was a loyal friend and defense counsel for Simspon during the football star’s murder trial. Schwimmer’s portrayal of Kardashian is a surprisingly warm and multifaceted one, but what really strikes a nerve today is watching Robert Kardashian interact with his family, as they are thrust into what is the first of their several ignominious bouts with fame.

Last night’s episode, “The Dream Team,” features Robert and his four children going out to a Father’s Day brunch at a Los Angeles hot spot, Chin Chin. There are absolutely no tables left, but when the hostess recognizes Robert as “the O.J. guy,” a table is found for the party of five. The kids are beside themselves with glee at being important in this way; Robert is a lot more conflicted, perhaps because he is old enough to grasp the implications of being famous for a connection to a murder trial. In the show, the notorious Kim Kardashian (Veronica Galvez) is just a pink-cardigan-sporting teen with a bob. Khloe (Morgan E. Bastin) is just a little girl with a headband with a bow, and brother Rob (Nicolas Bechtel) is very young. Kourtney (Isabella Balbi), a little shorter and shyer than Kim, has longer hair and more expressive eyebrows.

The moment with the hostess leads them to discussing the trial, and Kim—the most outspoken—expresses her opinion to her dad about her godfather, “Uncle Juice.” In response, Schwimmer’s Kardashian intones something that would be quite serious if it weren’t for the lens of 2016: “We are Kardashians. And in this family, being a good person and being a loyal friend is more important than being famous. Fame is fleeting. It’s hollow. And it means nothing without a virtuous heart.” As with pretty much anything else he says, it washes over the kids without much impact.

It’s a brilliant scene—one that is both funny and weirdly, implausibly, true, albeit with creative license. O.J. Simpson really is Kim’s godfather; they really did go to Father’s Day brunch at Chin Chin the Sunday after the Bronco chase. One of the reasons this show about this trial is so captivating is because these real people—a strange and now separately famous family—became enmeshed in it. “The People v. O.J. Simpson” is very aware of how public image creates and distorts narratives; what better contemporary reminder than teenage Kimberly Kardashian, already wise to the ways of celebrity?

Not everyone agrees, though. Scott Meslow writes at the Week that “’The People Vs. O.J. Simpson’ has a Kardashian problem,” arguing that the show indulges its “impulse to demonize the Kardashian kids” while missing an opportunity to humanize both the characters and the real-life people they grew up into. He’s not wrong that the show is trying to lay the groundwork for the kids, making the flashpoint of the trial part of the Kardashian origin story. The kids are so enthusiastic about this brush with fame that it draws a convenient throughline to them becoming fame-seeking celebrities, notorious simply for being notorious. By that time, Kris Kardashian (Selma Blair, in the show) and her then-husband were selling Thighmasters on television, so it wasn’t like they were unaware of celebrity already.

But my take on that is that the Kardashian kids’ reaction to fame is everyone’s reaction to fame, especially at that young age. The hostess is clearly beside herself to be welcoming “Richard Cordovian” in—and even Robert is pleased, faintly, that Barbara Walters personally called him up to be on her show. His speech sounds just as much like he’s reminding himself what’s important. The kids are audience surrogates for this trial, demonstrating how quickly the facts of the crime gave way to the media circus of it. Perhaps it’s a bit cynical about the kids at that age, but I feel like this lens makes the Kardashians of today a bit more sympathetic. These are kids who learned how the world worked early on, when fame immediately translated to privilege.

There’s definitely a way to read the scene that finds it a bit too self-indulgent—even for a big-budget true-crime anthology series on basic cable about events just barely 20 years ago. But I found it certainly a more humane glimpse of their family life than every single episode of “Keeping Up With the Kardashians,” which often emphasizes their disharmony. So what if it is their origin story? “The People v. O.J. Simpson” narrates a lot of tragedies; the Kardashian kids turned out just fine.