An exhaustive study shows privatization is more expensive, despite the right-wing's insistence to the contrary 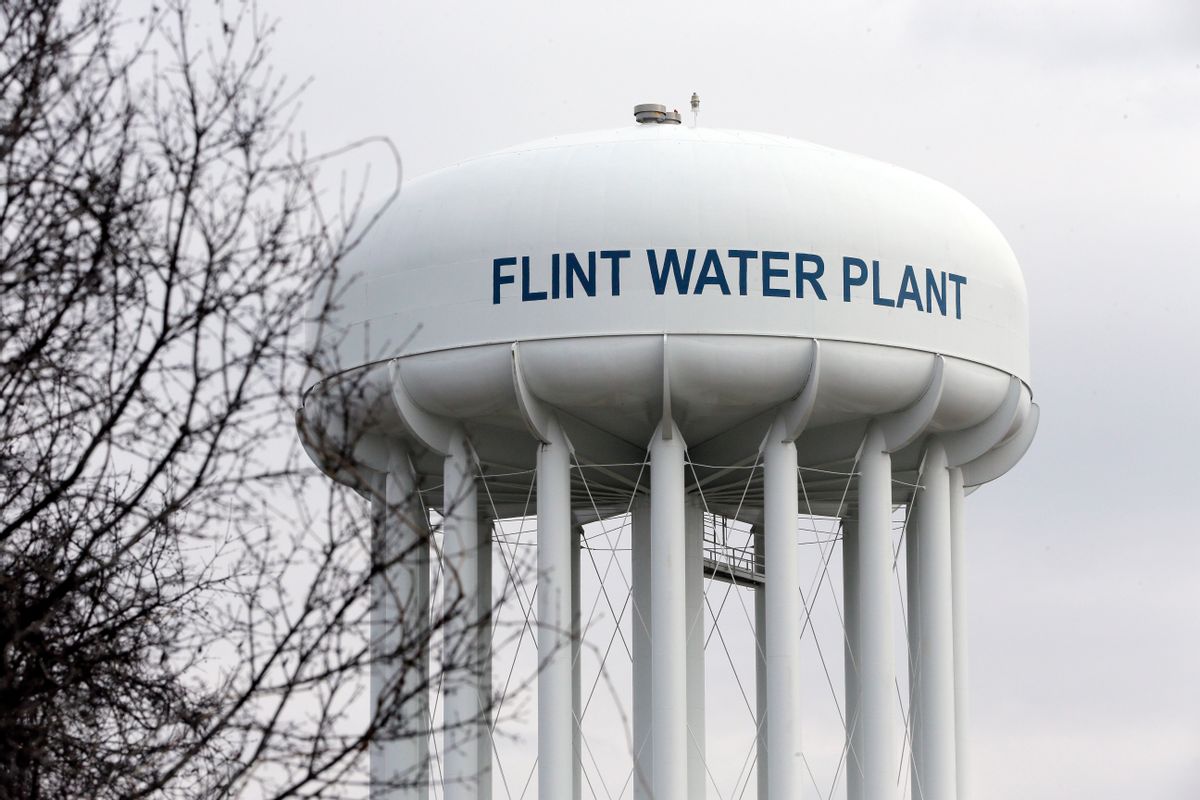 The Flint Water Plant tower is seen, Friday, Feb. 5, 2016 in Flint, Mich. Michigan Gov. Rick Snyder on Friday defended how his office responded to an email flagging a potential link between a surge in Legionnaires' disease and Flint's water, saying an aide asked for further investigation but a state agency did not bring forward the issue again. (AP Photo/Carlos Osorio) (AP)
--

The most affordable water systems in the U.S. are publicly owned and operated by the government, an exhaustive study reveals. At the same time, for-profit private water companies charge 58 percent more than publicly owned ones.

Food & Water Watch, a non-governmental consumer rights organization based in D.C., comprehensively surveyed the 500 largest community water systems in the U.S., in what it says is "the largest U.S. water rate survey of its kind."

The report, titled "The State of Public Water in the United States," reveals that the average public water utility in the U.S. charged $316.20 for 60,000 gallons a year, while the average private, for-profit water company charged $500.96 for the same.

In states like New York and Illinois, the disparity is even greater, with privatized water systems charging twice as much as public, not-for-profit ones.

"From emergency management in Michigan to failed privatization experiments across the country, corporate influence has failed U.S. water systems," said Wenonah Hauter, executive director of Food & Water Watch, in a statement regarding the study.

"Many of our community water systems are over 100 years old, and in desperate need of repair," Hauter continued. "Rather than running water systems like businesses, or worse, handing them over to corporations, we need increased federal investment in municipal water. With this federal funding, we can help avoid future infrastructure-related catastrophes."

For-profit companies own approximately 10 percent of U.S. community water systems. Most of these are small, however; 90 percent serve fewer than 3,300 people.

The vast majority of Americans, 87 percent, presently receive their water from a publicly owned, not-for-profit provider. And this number is growing.

Food & Water Watch also reviewed eight years of data from the Federal Safe Drinking Water Information System. It found that, between 2007 and 2014, the number of Americans who received water from a public system increased from 83 to 87 percent, while the number of private systems decreased by 7 percent.

The cheapest 142 of the 500 largest community water systems in the U.S. are public and/or non-profit. The cheapest private, for-profit water system comes in an inauspicious 143rd place.

Phoenix, Arizona has the least expensive water service in the country, with an average annual bill of just $84.24. The average annual bill in Clovis, California is $100.80, $104.74 in Hempstead, New York, and $116.48 in Miami-Dade, Florida. All are public, not-for-profit systems.

There are a few outliers. Flint, Michigan is among them.

Flint charges an enormous $864.32 annually, making it the most expensive mismanaged water system in the country. Trailing close behind, the most expensive private systems, provided in five different parts of Pennsylvania by the companies American Water and Aqua America, charge between $782.38 and $792.84.

In 2014, an unelected emergency manager appointed by the right-wing government switched Flint's water supply from Detroit to the Flint River, in order to cut costs. This quickly corroded pipes, causing toxic waste-levels of lead poisoning and a deadly outbreak of the disease legionella.

Libertarians and right-wing pundits called for Flint to privatize its water in response to the crisis. Free-market capitalist publication Reason insisted privatization would be the solution to all of Flint's problems. Hard-line right-wing billionaire David Koch sits on the board of the Reason Foundation. In her new book "Dark Money: The Hidden History of the Billionaires Behind the Rise of the Radical Right," New Yorker investigative journalist Jane Mayer documents how the Kochs bankroll the American right-wing and push a pro-privatization, pro-corporate agenda that both the Republican Party and much of the Democratic Party have largely embraced.

Supporters of privatization insist that reducing government regulation and letting corporations operate how they like reduces costs and increases efficiency. This study shows that this is not true, despite the frequent insistence to the contrary by neoliberal economists.

Privatization frequently moves the burden of cost onto external agents — particularly the commons, the environment and taxpayers — failing to factor in what are referred to in economics as externalities. Moreover, privatization often makes services unavailable to very poor people, or to people who live in rural or inaccessible areas.

"Government utilities have a responsibility to promote and protect public health and safety, and are generally more responsive to community needs," Hauter explained, commenting on the study.

"More and more cities and towns are seeing that water is more efficiently and affordably delivered when it is controlled by a not-for-profit entity," the Food & Water Watch executive director added. "Without shareholders expecting profits, public systems are less likely to cut corners on service, and excess funds are invested back into systems, not sent out of communities as dividend checks."

Despite the clear benefits of public ownership, nevertheless, the report notes that politicians have underfunded water services for many years.

Federal funding for water utility improvement projects has decreased over the decades. Accounting for inflation, federal support for water utilities dropped 74 percent from 1977 to 2014.

In the past few years, federal funding for water utility improvement projects has remained low. In 2010, it rose to 12 percent of what was needed, before dropping to 9 percent in 2014.