Ainsley Earhardt will fit in perfectly at "Fox & Friends": Check out some of the dumbest things the show's new co-host has said 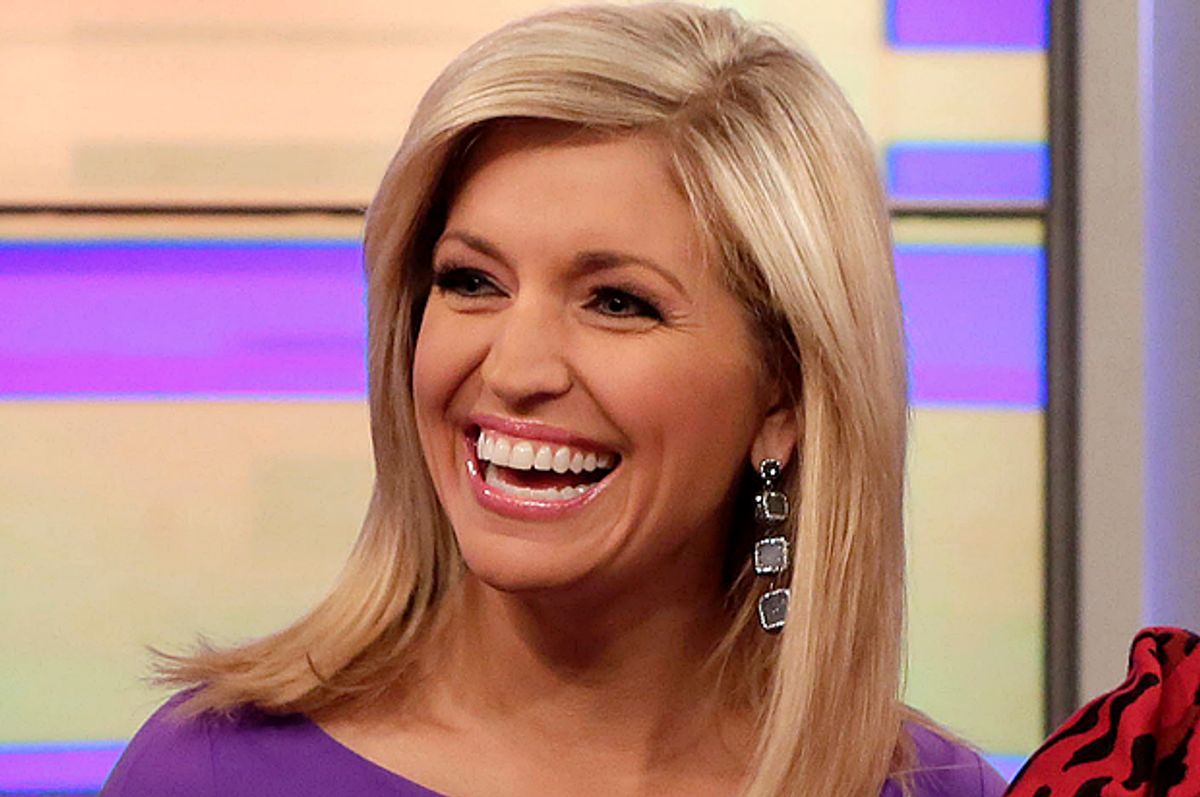 Ainsley Earhardt has been named the new host of "Fox & Friends," Fox News chairman Roger Ailes announced Tuesday. Salon took a look at Earhardt's track record since joining Fox News in 2007 to get an idea of what to expect from her on the network's popular morning show. It turns out she'll fit right in.

Media Matters for America has catalogued a long list of Earhardt's silly, stupid and downright false statements, which include complaining that President Obama doesn't say "Taliban" or "terrorist" enough, calling Cliven Bundy's supporters "good, hardworking Americans," and claiming that Detroit was right to deny 27,000 households access to water, in violation of the United Nations resolution recognizing access to clean and safe drinking water as a human right.

A dedicated culture warrior, Earhardt has also grumbled that "the government has bent over backwards to be tolerant of minority groups" and said that she's "tired of protecting the minority" when it comes to state-sanctioned displays of religion.

In August 2015, Earhardt defended Donald Trump's stance against birthright citizenship on the grounds that two Americans who ended up on the wrong side of the War on Terror, Al Qaeda operative Anwar al-Awlaki and Taliban fighter Yaser Hamdi, "were both born in our country to illegal parents." Earhardt went on to describe allegations that "the government was blocked from taking certain actions because -- or any actions against them -- because of their citizenship."

The statement is ridiculous on a number of levels. Neither Awlaki nor Hamdi were born to illegal parents, so Trump's proposed suspension of birthright citizenship would have had no impact on their status as American citizens. Awlaki's American citizenship was not enough to block the Obama administration from "taking certain actions" against him. Awlaki was extrajudicially assassinated via drone strike in 2011, the same fate suffered by his 16-year-old American son in a separate strike weeks later.

Hamdi's citizenship did eventually save him the fate of being held indefinitely in Guantanamo with other enemy combatants, but not before being held for nearly three years without charges, in violation of his Fifth Amendment right to due process. Hamdi was released to Saudi Arabia not because of his citizenship, but because the Bush administration failed to bring charges against him.

Earhardt joins Brian "Not all Muslims are terrorists but all terrorists are Muslim" Kilmeade and Steve "Donald Trump is like a Navy SEAL" Doocy on the "Fox & Friends" couch, and replaces Elisabeth "People get abortions for superficial reasons" Hasselbeck.