Kanye's Kubrick obsession: An examination of West's love for the legendary filmmaker

During his "SNL" meltdown, Kanye claims he's way more influential than Kubrick, who clearly influences him 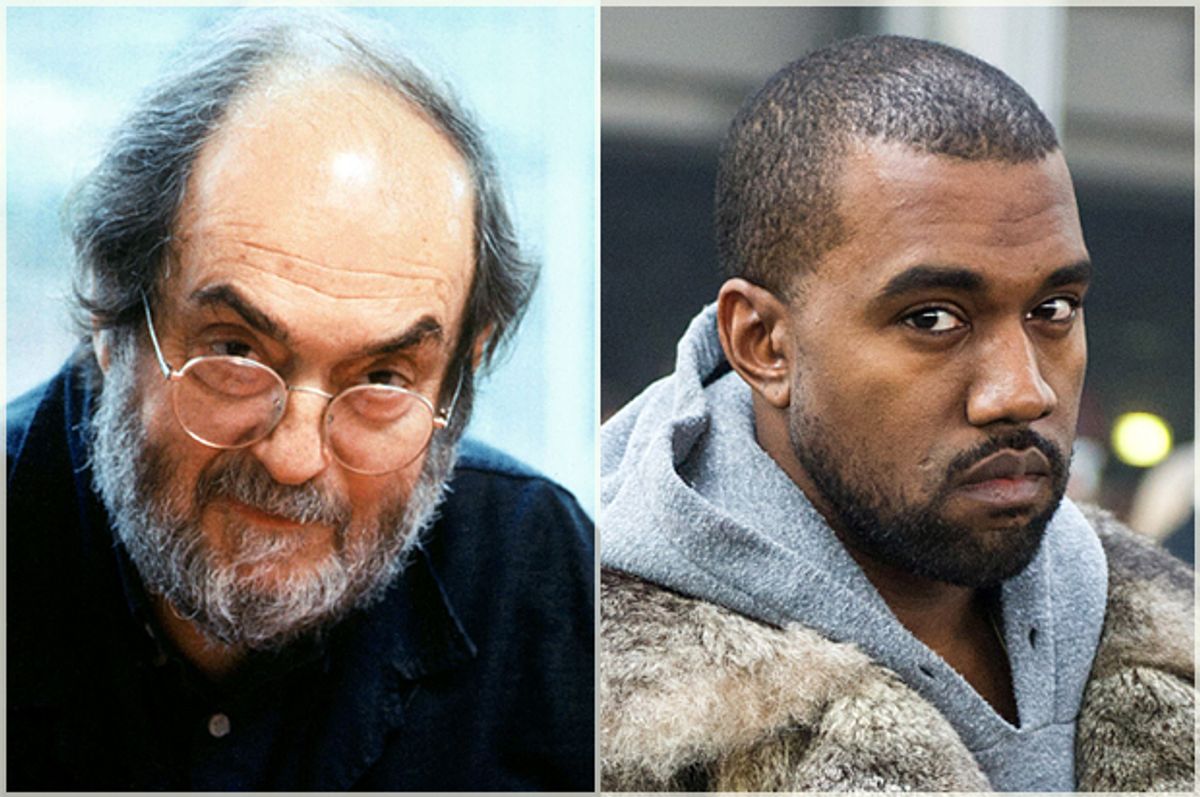 Kanye-watchers have been a bit confused lately, with the musician/fashion designer's puzzling shout-out to Bill Cosby, his fight with Wiz Khalifa and the revival of his feud with Taylor Swift. Was all of this a big publicity push in anticipation of his new record, “The Life of Pablo”? Or was it – as is often the case with West -- something more complicated?

Since the audio of his backstage freakout on "Saturday Night Live" leaked, something, at least, is becoming clearer. Here’s Page Six:

The fact that he’s comparing himself to such enormous figures isn’t that surprising. (Since St. Paul basically inaugurated Christianity, this one actually may be a difficult for West to live up to.) Given the title of the album, the Picasso and Escobar references are not that startling.

But if you squint, something becomes clear: West has a longtime obsession with Kubrick and may now be engaged in some mix of homage and Oedipal struggle with the director of “The Shining,” “A Clockwork Orange” and “Eyes Wide Shut.”

At first this may seem odd, since West is a ubiquitous figure who shows up on Twitter constantly. He held the release event for his new album, complete with fashion show, at Madison Square Garden, and he's hardly shy about television appearances. Kubrick was a recluse who retreated to England in the mid-‘60s and would probably not have spent a lot of time on social media.

But the record shows West’s long fascination with the eccentric director. Maybe it's a "Rosebud" of sorts for the enigmatic West.

When he toured a school in Armenia last November, for instance, West told one of the teachers, "They’re shooting my wife’s show, and I keep on, like, asking them to shoot it like it’s Stanley Kubrick." (He’s said for years that he doesn’t much like the way “Keeping Up With the Kardashians” is filmed, and he’s dodged appearances on the show because he doesn’t like the cinematography.)

That’s not West’s only reference to the director. Both the video for “Flashing Lights” and the short film of “Runaway” – one of the best things West has done – are apparently indebted to Kubrick. He told MTV:

“Look at it graphically, how it starts,” he said of “Flashing Lights.” “With the car, the orange sky, the color palettes, the blue sky, the car pulling up with the orange headlights. And just the beautiful women, taking the Helmut Newton type photo and bringing it to real life and crashing it against Jim Henson and George Lucas type whimsy and taking, like, a [Federico] Fellini, [Stanley] Kubrick pacing and a very graphic novel/ comic book type setup on all the shots. There’s a lot of shots that are borderline illegal for a film student. It just breaks rules, because I have absolutely no idea what I’m doing.”

Having “no idea what I’m doing” is about as far as West could get from Kubrick, who was a very deliberate, controlled filmmaker. It makes you wonder: Is West just using Kubrick’s name as shorthand for a serious, arty filmmaker?

But West actually seems to be a real student of Kubrick, or at least to have watched “Eyes Wide Shut” a bunch of times. “Runaway” has the grave, stately tempo that Kubrick was known for, and uses a repeated piano figure from Kubrick’s last movie. When he was making the “Runaway” film, West tweeted shots from the Kubrick movie.

Whether West’s video achievements can compare to the director of “2001: A Space Odyssey,” “Barry Lyndon” and all the others is hard to say. And why would a developing Kubrick obsession provoke West’s recent acting out, given what an introvert the director was?

But he’s clearly got Kubrick on the mind in recent years. Maybe his next album will be called “The Life of Stanley” and make its premiere at an English manor? Probably not. But with Kanye West, anything is possible.