The use of the bombs violates American export law, according to a new Human Rights Watch report 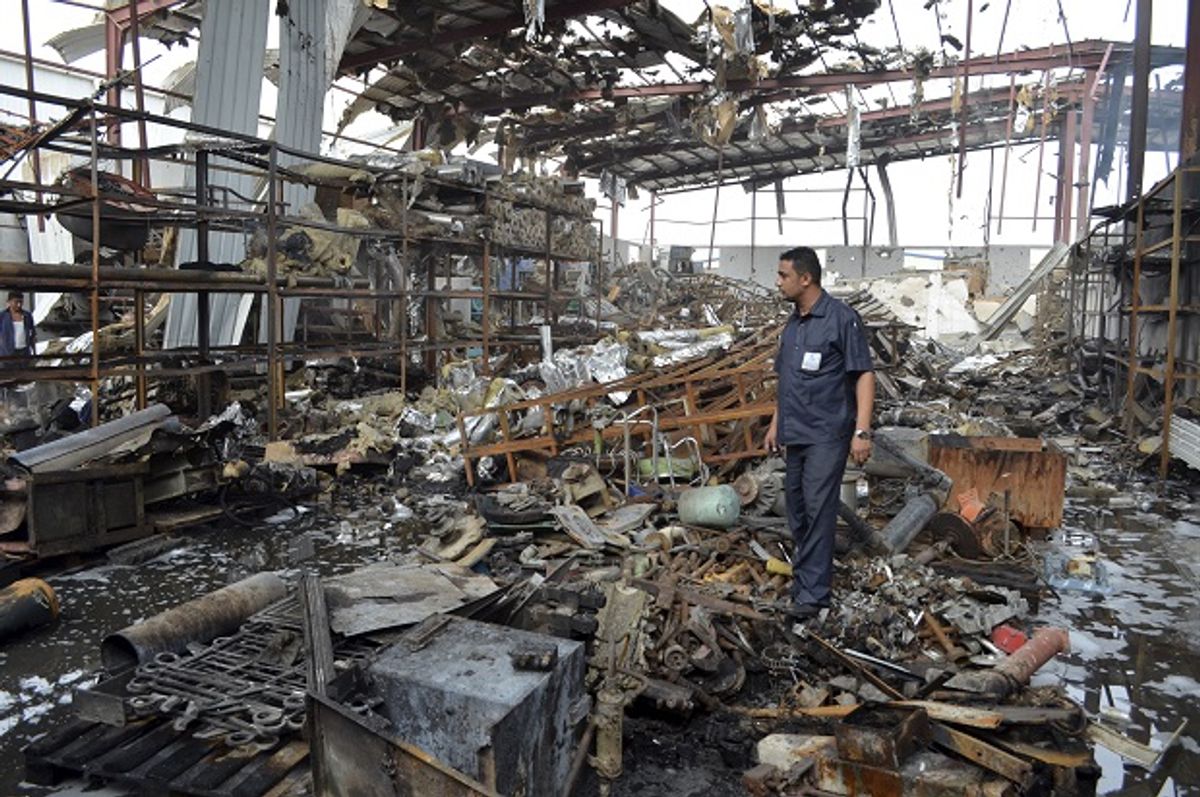 On December 12, Muhammad Ahmad was sitting on a hill with six friends watching the Saudi Arabia-led military coalition launch air strikes on the port of al-Hayma, located in Yemen’s Hodaida governorate less than a mile from his fishing village.

Suddenly, the 33-year-old saw something strange: “About 20 white parachutes in the air, falling toward the port. Less than a minute later, each one released a cloud of black smoke as it neared the ground and exploded,” Ahmad told Human Rights Watch researchers.

“Less than five minutes later, it happened again, another bomb let out a group of about 20 parachutes and the same thing happened,” he continued. “But because of the direction the wind was blowing, the parachutes suddenly started falling toward our village.”

Those parachutes would go on to hit numerous homes in the town, breaking through walls and shattering windows before wounding at least one woman and two children.

Now, a new HRW report has determined that the attack involved internationally banned cluster munitions that were manufactured by Textron Systems, an aerospace and defense manufacturing firm headquartered in Providence, Rhode Island.

Cluster munitions pose a profound threat to civilians because of their wide range of impact, as well as their frequent failure to explode, leaving behind dangerous canisters. “Such remnants kill and injure civilians, obstruct economic and social development, and have other severe consequences that persist for years and decades after use,” warns a statement from the Convention on Cluster Munitions, which bans the weapons. While 118 countries have signed the treaty, Saudi Arabia and the United States have so far refused.

The HRW report tells a different story. “[P]hotographs taken by Human Rights Watch field investigators at one location and photographs received from another location show BLU-108 from separate attacks with their ‘skeets’ or submunitions still attached,” the investigation states. “This shows a failure to function as intended as the submunitions failed to disperse from the canister, or were dispersed but did not explode.”

“First, U.S. export law prohibits recipients of cluster munitions from using them in populated areas, as the Saudi coalition has clearly been doing,” the report charges. “Second, U.S. export law only allows the transfer of cluster munitions with a failure rate of less than 1 percent. But it appears that Sensor Fuzed Weapons used in Yemen are not functioning in ways that meet that reliability standard.”

Textron representatives could not be immediately reached for comment.

In 2013, Textron struck a $641 million U.S. Air Force contract to manufacture 1,300 CBU-105 bombs for Saudi Arabia. Beyond cluster munitions, the United States is the top supplier of arms to Saudi Arabia, including massive weapons shipments since the coalition airstrikes on Yemen began.

The HRW report is not the first to warn of the dangers posed by the use of cluster bombs in Yemen. In January, the president of the Cluster Munition Coalition wrote a letter to President Barack Obama calling on the U.S. "to investigate its own role in the recent strikes and to cooperate with any independent, international inquiry into alleged violations of the laws of war by all sides."

Numerous human rights groups have called for an arms embargo on the Saudi-led military coalition. Since the alliance’s bombings began in March, at least 2,795 civilians have been killed and 5,324 wounded, the vast majority by coalition forces.

The cluster bomb attacks exposed by HRW are not “the first time Saudi Arabia or its allies use illegal and banned weapons in their illegal wars,” Rooj Alwazir, activist and co-founder of Support Yemen Media, told AlterNet. "But the main people I point my finger at is their U.S. supplier," Alwazir emphasized. "The weapons manufacturing company is a $400 billion industry, and the larger amount of Yemenis killed, the bigger the profit is made.”