Nikki Haley bets against the Trump monster: How the GOP governor is making a play for the future of the party

The South Carolina governor has endorsed Marco Rubio, probably ending her chances at VP. But there's a long game 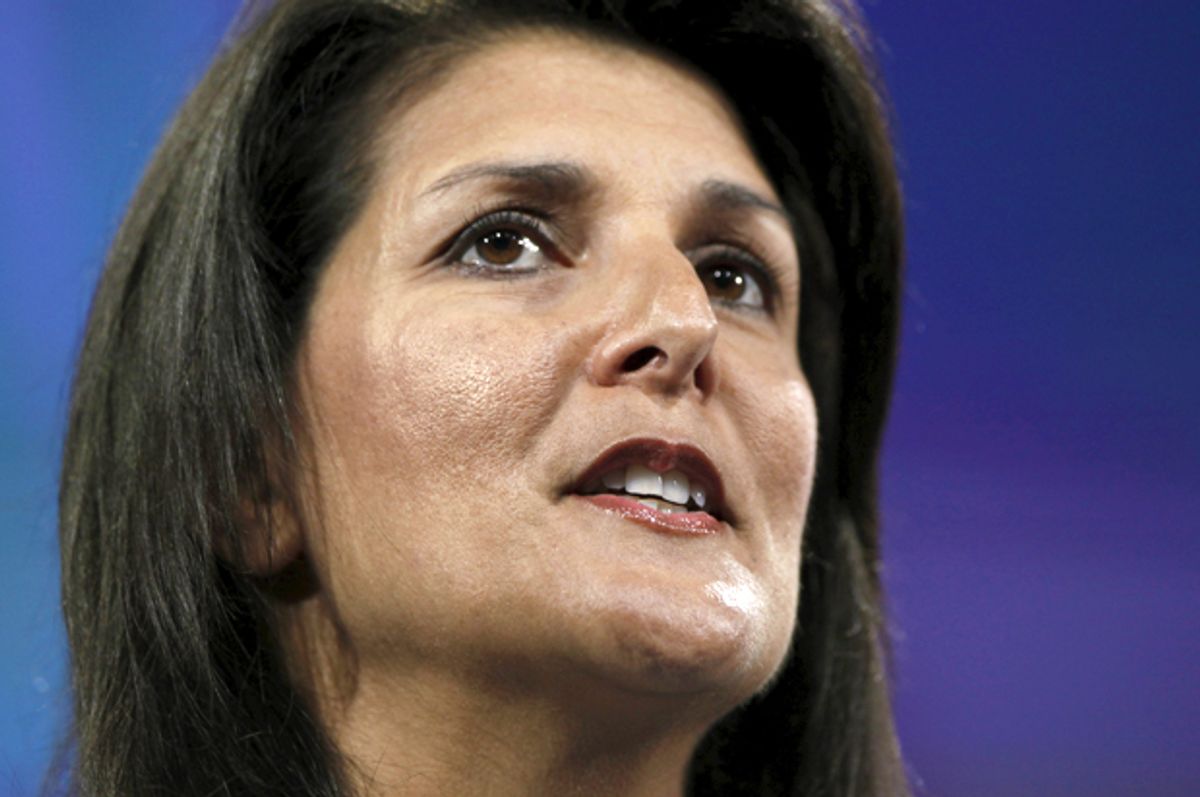 South Carolina’s governor, the popular and weirdly lock-jawed Nikki Haley, has endorsed Marco Rubio for president ahead of Saturday’s primary. This has caused a minor ripple of excitement in the campaign press, which always needs a story to fill column inches and airtime. It makes Haley the third notable South Carolina politician, after Sen. Tim Scott and Rep. Trey Gowdy, to endorse the Florida senator.

Much will be made of this endorsement, though mercifully only for a short time, since Rubio is due to get crushed by Donald Trump a mere two days from now. It might help him sneak by Ted Cruz, currently in second and 5 points ahead of his Senate colleague. But even if it doesn’t, third place will probably be spun as a glorious victory for the Rubio juggernaut.

The larger picture, though, shows just how meaningless these sorts of party endorsements have become this primary season, at least on the Republican side. Haley is exceptionally popular right now, with an 81 percent approval rating among South Carolina Republicans. She’s a young fresh face in a party that desperately needs the diversity if it ever intends to shed the label that it’s mostly a home for old white people. The sight of her onstage at a rally with the African-American Scott and the Cuban-American Rubio must give the party bosses chills. (Benghazi-American Gowdy is white, but he’s relatively young, so he’s a wash on the GOP diversity scale.)

It should surprise no one – except maybe Jeb Bush – that Haley would endorse the current Establishment favorite, though her record of embracing popular Republicans is somewhat mixed. During her first campaign for governor, in 2010, she eagerly accepted the endorsement of Sarah Palin, which helped catapult her from last in the GOP primary into a runoff election that she then won easily. In 2012 she endorsed Mitt Romney well ahead of the primary. Romney went on to come in second in South Carolina, 13 points behind Newt Gingrich.

Haley, meanwhile, has prospered while trying to rebrand herself as something more than a Tea Party politician. She earned praise for her handling of the aftermath of the Emanuel AME massacre in Charleston last summer, and for using it to wade into the always-contentious issue of removing the Confederate flag from the state Capitol’s grounds. (Yes, this should have been a no-brainer before the flag even went up in 1961, but the Civil War began in South Carolina. The state has a steep learning curve.) She toes all the proper Republican lines: business-friendly, fanatically antiabortion and pro-Second Amendment, though still willing to sign a law banning domestic abusers from owning guns.

This has all led to talk of Haley as a possible vice-presidential nominee this year. She got a major audition when she was tapped to deliver the GOP response to the president’s State of the Union this past January. Not only did she implicitly renounce the Trumpism derailing her party, but she managed to pull it off without completely embarrassing herself. Which was a welcome change from most of the Republicans who have gone before her in this duty during the Obama era. Including, notably, the man she just endorsed.

But this is the Era of Trump. Unless he seriously underperforms his poll numbers, the real-estate mogul will win the South Carolina primary by even more than Gingrich beat Romney four years ago. It’s a measure of how deeply he has upended Republican politics that even shameless opportunists like Haley have not yet figured out how to harness themselves to him and to his supporters.

The Rubio endorsement is really Haley’s bet that even after this bloody bar fight of a primary season for the GOP, there will still be some shred of Republican Establishment left to pick itself up off the ground, pluck the shards of glass from its extremities, and keep pushing her as the party’s future. It’s her bet that Trumpism is a passing fad and will burn itself out. She’s termed out in early 2019 and must be thinking about her next move, especially if, as seems likely, she’s not the vice-president next year. So she’s playing the good soldier for the party bosses, smiling and waving on a stage next to their preferred candidate, even if he is showing himself to be an enormous dud.

In short, she’s betting there will even be a recognizable GOP power structure that can boost her career beyond this election cycle. It’s a rational bet for a longtime party creature like Haley, but with the boost toward the nomination Trump will get in her state on Saturday, it’s hardly a safe one.