"SNL" has Weekend Update trouble: What this behind-the-scenes story really reveals about the floundering fake news 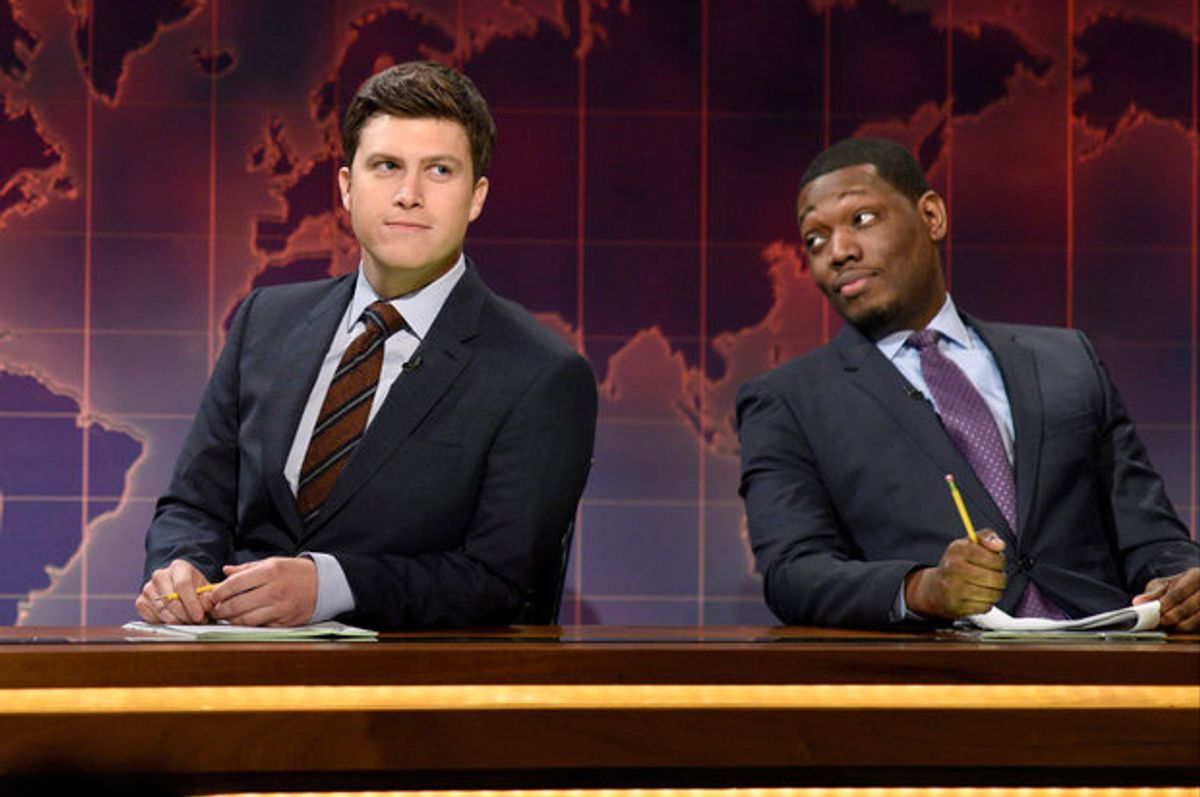 It was interesting seeing this piece from Variety cross the Salon culture desk’s email inboxes this afternoon: “Why ‘SNL’ is Adding Breaking News to ‘Weekend Update’ (EXCLUSIVE)”. It’s kind of a revolutionary idea—“Saturday Night Live”’s satirical news segment “Weekend Update” predated “The Daily Show” and The Onion, but being weekly can’t offer even close the level of hair-trigger responsive comedy that those comedy institutions can. Is this going to be a new segment in “Weekend Update”? Is this an announcement of a new format?

Well, it’s none of those things—indeed, it is barely news, despite the “EXCLUSIVE” stinger. With no offense meant to Variety or this article’s author Brian Steinberg—we’re all in the same business—this is a light story behind the scenes at “Weekend Update,” and not too newsy at all.

But it is fascinating, on closer analysis, how much this article reveals about “Saturday Night Live”’s current dysfunction, papered over with the intention of making “Weekend Update” sound on the up-and-up. This is a piece that is designed to prove the satirical news segment is improving—but unwittingly (or, rather cleverly) offers an insight into the inner workings of “Weekend Update” that make it sound like the segment is doing worse than ever.

Some background, if you are blissfully unaware of the comedy-nerd meltdown presently occurring around “Weekend Update”: Everybody (in the loose use of that term) hates Colin Jost. He was a head writer on “SNL” until late last season, when he was quietly demoted; showrunner Lorne Michaels admitted to the New York Times that “Weekend Update” wasn’t working; and as the Atlantic, EW, and the Daily Beast have dissected, Jost just isn’t a good anchor. He didn’t mesh well with either Cecily Strong or Michael Che, either; the segment that launched the careers of Tina Fey, Seth Meyers, and Amy Poehler—not to mention “SNL” icons like Norm MacDonald, Jane Curtin, Dan Aykroyd, and Chevy Chase—has become the weakest on the show.

The Variety article is framed as if “Weekend Update” is making major changes or really revitalizing the segment. What that boils down to? Introductory riffs on things that happened the day of, like the Saturday night debates. Doesn’t sound all that revolutionary—and it’s especially unimpressive given that “SNL” routinely does a cold open on an extremely timely event and has wigs, costumes, and a script ready to go.

What else are they doing to inject new life into “Weekend Update?” Well, says Dennis McNicholas, who is currently supervising the segment (and worked with Fey as head writer):

Indeed, the “Update” crew is doing more communicating these days,  said McNicholas, who has dismantled a longstanding routine. In the past, “Update” writers worked on their own “and pounded out fast lines.” Now there is more collaboration, he said, part of an effort to find ways to spur cross-talk between Che and Jost. In one instance, Che might start riffing on Donald Trump and racism, then pass things along to Jost, who continues talking on the subject.

Article author Steinberg observes diplomatically, “While many of the tweaks are taking place behind the scenes, they might be considered seismic by ‘SNL’ standards, as ‘Update’ is something of an institution.” Less diplomatically, I’ll add that explaining how two comedians might riff off of the same topic has a painful, bad-improv class vibe that makes me wonder how “SNL” has ever been funny.

The two were the beneficiaries of some valuable advice that they have recently taken to heart. Bill Murray, the actor and former cast member, stopped by the “SNL” offices in the fall, and suggested the duo start reading the “Update” script together to each other. “You just might find something there,” Jost recalled Murray telling them. “It was very simple advice,” Jost said, but “it helps us find asides or ways we can help each other tighten our jokes, or punch them up with a phrase.”

It’s entirely possible that “Weekend Update” is improving. It is difficult to imagine how I’d conclude that from this piece, where the major players are apparently back to square one of joke-writing, trying to solve what might well be an unfixable problem. McNicholas goes on to explain that the reason that riffs are such a big deal is because Lorne Michaels doesn’t like interplay on “Weekend Update”—and of course, Michaels is the man who decided to keep Jost in the anchor’s chair and dismiss Strong, who co-anchored with Seth Meyers. The thinking behind that decision is still the real story of "Weekend Update."