“Until last week, the bride worked”: Can you tell the difference between the New York Times Weddings parody and the real thing? 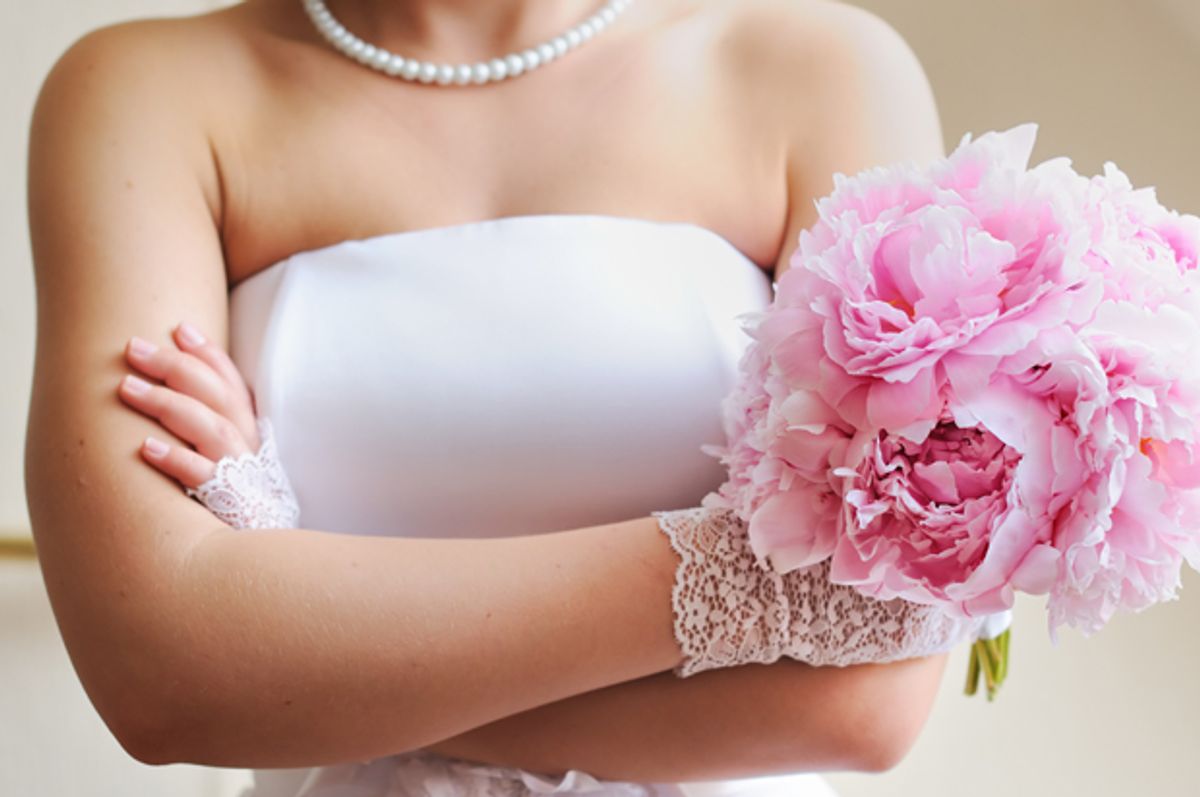 If you’ve cracked open the Sunday New York Times and found yourself rolling your eyes at the Vows section’s pronouncements, you’ll want to check out Selena Coppock’s Twitter parody account NYTVows. Coppock lovingly mocks the name-dropping, prestige colleges, career choices and ceremonies of the carefully chosen brides and grooms so well that her account’s even been mistaken for the real thing (@nytimesvows), where you’re likely to find headlines that can often sound like rom-coms: “He went on a dating fast -- and found love.”

In 140 characters or less, she manages to cut right to the core of the whiff of elitism that can often be found between those coveted pages:

Coppock, a standup comedian and author of “The New Rules for Blondes,” told Salon makes the section so easy to “love to hate,” the project’s feminist angle and whether she’d ever offer up her own vows to be mocked by the masses.

Was there a specific Vow or any specific moment that made you decide to start the Twitter account?

I’ve been reading the section since I was 12 or so and I truly love to hate every single wedding announcement. I have a few friends in comedy who perform as stage personas or run parody twitter accounts and it struck me that they can do such outrageous things when “protected” by the fact that it’s satire, so I decided to dive in and create this account over the summer. Summertime is high season for fantastic wedding announcements.

Also, I find weddings bizarrely fascinating and, as a former college sorority girl, I’ve attended a ton of them. So this account was a perfect marriage of my time served attending dozens of weddings and my love of WASP culture and The Times.

What about the New York Times Vows section in particular do you think calls out to be mocked?

So much—the fact that they namedrop the Mayflower earnestly and with regularity, the overly precious phrasing and vocabulary that they use, and the insanely impressive resumes of their participants.

Are there phrases you've seen crop up repeatedly in Vows or ones that particularly annoy you?

Yes—comparisons to stick thin Hollywood actress’s vocal patterns or way of behaving. Also, the phrase used only about brides: “until last week, the bride worked at such and such company.” I can’t get over that that is a thing! Is it a situation where some women think, “Welp, I spent all those years in school and at work and now I can hang it up and focus on being a person who is married.” I don’t mean to judge, but I’m just a workhorse and I can’t imagine a life without work or volunteering or some form of structure.

Which Tweets have been the most popular?

I find it interesting that some of the darkest/snarkiest ones are the most popular. Also, the more specific, with references to a school or company, the better, it seems.

What's your response when your parody account has been mistaken for the real thing?

To be honest, I feel a bit bad because I don’t want anyone to be confused or think that anything is done in a mean spirit. I always tweet back and assure them that I’m a parody.

Is there a feminist element to this project?

For sure. As I mentioned before, the use of “until last week, the bride worked at such and such company” is something I find bizarre but also somewhat sad. A lot of these women have really impressive resumes of top notch colleges and grad programs and great careers and they seem to hang it up the moment they have crossed a self decided “finish line” of marriage. My parents raised me with the ideals that even within the structure of a marriage, each partner should have his or her own money and some measure of financial independence, so deliberately quitting work is something that’s quite antithetical to my belief system. So one of my all time favorite tweets from NYTVows is a take on that:

Have you had any feedback from any of the couples you've moved, or anyone at the Times?

No, but I hope that the Times appreciates that it’s a satirical take on a section that I find extremely interesting. I’m fascinated by people and how they meet, how they fall in love, what circumstances took them to where they are. That curiosity is why I started reading the section religiously as a young girl in the Boston suburbs and I hope that the Times gets that, as they say, we only roast the ones we love.

The Vows section is especially great at making a romantic story filled with twists and turns—I give them so much credit! You might think that your and your partner don’t have that compelling a story—you met on OKCupid or at a local bar and there were some mixed signals or bad dates and then you decided to lock it in for life—but it’s putty in the hands of the Vows section writers. They will craft a tale of love found but nearly, tragically lost and thankfully redeemed and finally celebrated with a sunset Hamptons soiree.

Is the classism you parody specific to the New York Times, or do you think it's a reflection of wedding culture?

My favorite NYTVows Tweet on that theme is this one:

How the inclusion of gay and lesbian weddings meant there's less to mock, or more?

More. I’m an equal opportunity offender! I respect that The Times began including same sex wedding announcements long before the Supreme Court Ruling in June 2015 and I feted them with a tribute tweet:

Having read and mocked so many Vows, would you ever send in your own?

Of course I would! My mom, a New York City native, used to joke that I was her only hope to get listed in Vows. Both of my older sisters are married and weren’t listed, but I’m single and went to college upstate (Hamilton College) so we think that someday, if this parody Twitter account hasn’t gotten me blacklisted, I could be included in Vows.