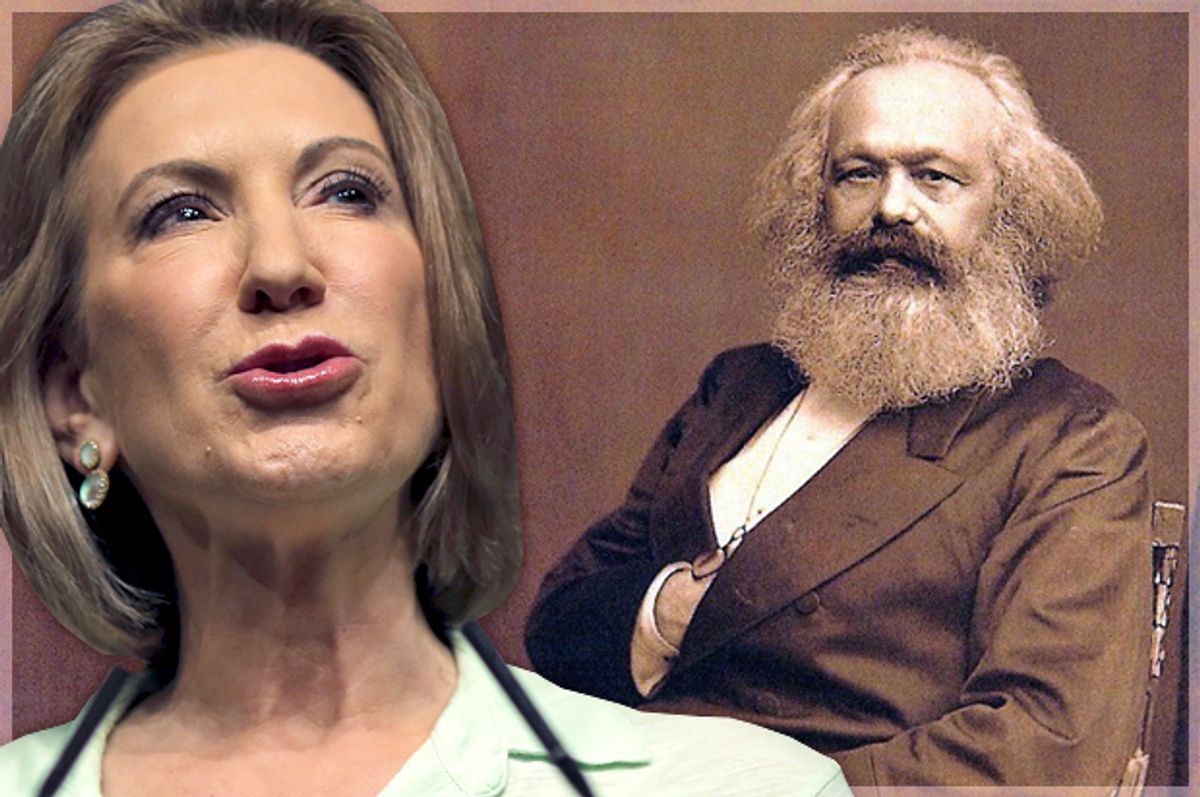 A Bernie Sanders supporter is auctioning a copy of Karl Marx's opus "Capital," signed by one of the most unlikely of people: former Republican presidential candidate and Hewlett-Packard CEO Carly Fiorina.

Peter Hogness is part of the group Socialists for Bernie Sanders, a grassroots organization that is independent of Sanders' campaign but supports it.

In a unique fundraiser, Hogness thought it would be a good idea to sell the book to raise money to support Sanders. He launched an eBay auction last week with the autographed book.

Throughout the past several days, bidding for the book has exploded. As of Thursday evening, with three days left to go, there were 37 bids for the book, at a price of $690 and growing. (A photo of Marx's "Capital," signed by Fiorina)[/caption]

The story of how a socialist got a copy of Marx's masterpiece signed by a Republican corporate executive is quite an interesting — and funny — one.

Hogness, who now lives in Brooklyn, went to high school with Fiorina in Palo Alto, California. The two knew each other at the time, and even had a piano teacher in common.

In 2007, Fiorina went on a book tour to promote her memoir "Tough Choices." Hogness thought it would be interesting to see his former peer speak. He showed up at the bookstore and, while attendees were standing in line hoping to have their books signed, had a spur-of-the-moment idea: What if Fiorina instead signed a copy of another book? As a politically active socialist, the first volume of Marx's "Capital" — titled "Das Kapital" in the original German — was one of the first books to come to mind.

Fiorina, who told Hogness she remembered him from high school, agreed to sign the book.

Almost a decade later, when Fiorina began running as a Republican presidential candidate, Hogness was reminded of the book, and struck with the creative fundraising idea.

In an interview with Salon, Hogness recalled that Fiorina did not appear to be politically active in school. He himself was organizing in the labor movement, in which he would later go on to work for years.

When the two were in high school, Hogness noted that California frequently boasted it had the best public education system in the country. In 2007, however, when he and Fiorina briefly reunited — "decades after Proposition 13 and a generation of subsequent further tax cuts," Hogness noted — California had fallen down the list and was competing with Alabama and Mississippi in per-pupil spending.

He remembered asking the CEO if the "atrophying of public school funding causes you any concern?" Fiorina replied in the negative, saying something to the effect of "you can't throw money at problems."

Marx's "Capital, Volume I," the philosopher's masterwork on the political economy of what he called the capitalist mode of production (the term "capitalism" was rarely used in Marx's day), is a dense, scholarly tome that details the internal contradictions of the capitalist system.

In a press release the enterprising Hogness created for his auction, he played off of some of the economics terms Marx uses in "Capital."

"The use-value of this particular copy of Capital's first volume is the same as any other: you can read it to find out what Marx had to say," he wrote. "But its exchange value has changed: this copy will now command a higher price in the marketplace."

"By signing this copy of Capital's Volume I, Carly Fiorina has increased its exchange-value," Hogness added. "And I can’t think of a better use for that exchange-value than to help to elect Bernie Sanders as our next president."

"The book describes capitalism's relentless drive to reduce labor costs regardless of the human cost, and how over time this helps create a 'reserve army' of the unemployed," he further explained. "Before Fiorina became its CEO, Hewlett-Packard was known for its reluctance to lay off employees. But she laid off tens of thousands without hesitation, and in that sense made HP a more thoroughly capitalist enterprise."

Hogness quipped that "Marx's analysis in 'Capital' describes Fiorina's career in too many ways to count."

Some socialists in the U.S. have criticized Sanders, whose politics, despite media exaggeration and the candidate's self-identification as a democratic socialist, are more in line with European-style social democracy than they are socialist — and whose foreign policy views, in particular, although much less hawkish than Clinton's, still leave a lot to be desired (Sanders supported the disastrous U.S. wars in Afghanistan and Libya and shouted down pro-Palestinian protesters).

But, although Hogness had some criticisms of Sanders, he was very excited about the growing grassroots movement around the longtime independent Vermont congressman.

The important thing about Sanders' campaign is how it "is really opening up the debate about what is politically possible," Hogness stressed. The right-wing "has really managed to shift the terms of politics in this country way to the right," he lamented, and Sanders is opening up a new political space in which "socialism is no longer treated as a taboo word."

Hogness has leafleted and made phone calls for the Sanders campaign. He has also asked New Yorkers to sign petitions to get Bernie on the ballot.

Reflecting on Sanders' chances running against a Wall Street-backed millionaire like Hillary Clinton, Hogness said "I think his hardest obstacle will be getting the nomination." But "it's very impressive that Sanders has made it this far," he added.

"I'm honestly kind of shocked that the bidding has gone this high," Hogness admitted. Some might see it as a sign of the strength of the Sanders campaign, symptomatic of Americans' increasing openness to and even excitement about alternatives to the exploitative economic system they live under.