A white buddy for Miles Davis: Don Cheadle's struggle to get "Miles Ahead" financed is absurd — and not surprising 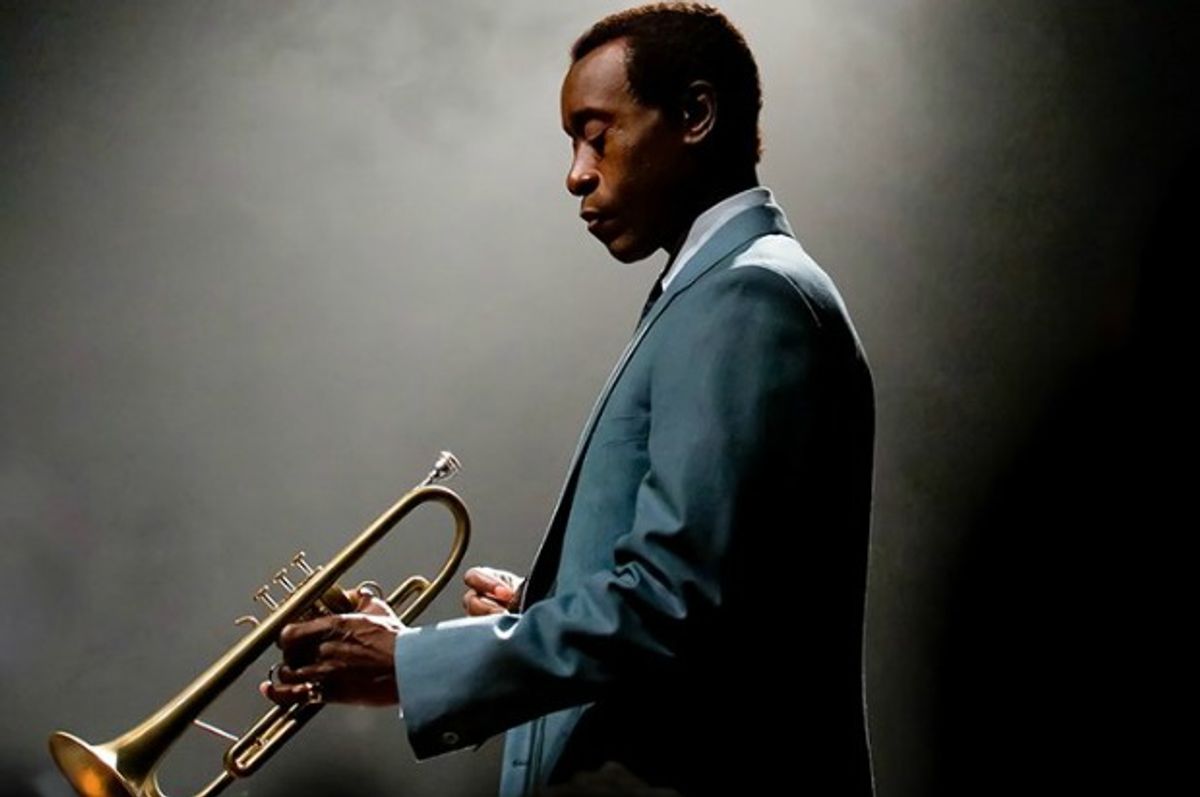 In the early 1950s, the CIA liked to meddle in the American film industry. During Eisenhower’s presidency, historian Hugh Wilford explained, a CIA agent at Paramount studios engaged in an “astounding variety of clandestine activities” with the goal of influencing Hollywood motion pictures in order to enhance this country’s image abroad. The idea was to show the world that life in free, liberty-loving America was the polar opposite of repressive Russia, Cuba, and China. Subsequently identified as executive Luigi G. Luraschi, the studio’s Head of Foreign and Domestic Censorship, this particular CIA agent was strongly interested in countering “adverse publicity” about race relations in the US by trying to get African-American characters cast in films where they would be shown as the social equals of whites.

That was six decades ago, during the height of the Cold War. Earlier this week, Oscar-nominated actor Don Cheadle described his decade-long struggle to make a biopic about jazz legend Miles Davis. He raised about $360,000 via crowdfunding, but only cleared the final financing hurdle when he wrote in a fictional Rolling Stone reporter and cast Ewan (“young Obi-Wan”) McGregor in the role. Interviewed at the Berlin Film Fest, where “Miles Ahead” was screening out of competition, Cheadle said that casting a white actor in a leading role was “one of the realities of the business that we are in,” adding that “there is a lot of apocryphal, not proven evidence that black films don’t sell overseas.”

Superficially, based on these two descriptions alone, it would be easy to say that the PC police in Hollywood have won, and the tables have turned on the racial dynamics in Hollywood. Last century, conspiracy theorists might mutter, the government was secretly making liberal Hollywood cast Black actors in (white) films. This century, Black films are being forced to include white characters, because all-Black castings in films = racist or something, like The Wiz or Beyoncé’s Super Bowl halftime performance of her single, “Formation.” Karma’s a bitch? Nope. In both cases, there is the interesting role played by the rest-of-the-planet—the planet peopled by individuals who don’t reflexively share an American worldview--but the meaningful shift of emphasis isn’t sociopolitical, but geo-economic.

In the ‘50s, CIA agent and Paramount executive Luraschi could not dictate, only suggest castings. He was outranked by the director and studio head at Paramount, who refused to add Black characters to the Jerry Lewis and Dean Martin comedy, “The Caddy,” out of fear it would “upset southern white moviegoers.” In Hollywoodland, erasure was easier and less financially risky than inclusion. And for all the cheerful goofiness of those Lewis & Martin films full of country-club hi-jinks, it is sobering to realize they, and many more films sharing the same breezy message of all's well here in the Good Old USA, were made around the same time that Miles Davis was beaten by a policeman outside of the New York City jazz club, Birdland.

Reporters later interviewed a dozen witnesses who said that the detective was drunk, that Davis was innocent, and that the beating was excessive. (“They beat me like a drum,” Davis complained.) One woman said that when she saw what they were doing to Davis, she hit one of the policemen herself.

“For many,” notes anthropologist and musicologist John Szwed, “it became a defining moment in race relations in New York.” By this time, Miles Davis was already world famous, and his arbitrary arrest came amid a spate of protests due to repeated incidents of police brutality in the North, along with a string of black church bombings and a surge of Klan activity in the South. Yet the press still focused on the white woman who’d been with Miles, whose womanhood the New York City policeman had stepped forward to protect. Thus Miles Davis, musical genius, was beaten into a bloody mess for being a black man with a white woman who wasn’t a girlfriend, a wife, or a band member, but was just sort of there. Davis accepted the beating as part of the price of being a Black man in America.

This is how whiteness shows up in Black stories: as a sudden intrusion, sometimes violent, often female, always alien, against a refrain of dignified, resigned acquiescence. In the documentary “Straight No Chaser,” about Davis’ fellow jazz great, Thelonius Monk, it shows up in the form of Baroness Kathleen Annie Pannonica de Koenigswarter (née Rothschild), patron of the arts and unlikely groupie. “After Bird [Charlie Parker] died, they [his bandmates] threw me out,” she narrates in the film. She then migrated to Monk, hanging out with him and his bandmates until, she laughs, they threw her out too. As for Miles Davis, author Norman Mailer had famously modeled “Shago Martin” in “An American Dream,” after him, for in real life, their lives had intersected dramatically in the form of Beverly Bentley, Miles’s lover and Mailer’s wife.

As much as anyone, Mailer helped consolidate the myth of the hyper-virile, cool, dangerously gifted Black man in American popular consciousness. Given the length of time that Cheadle struggled to realize “Miles Ahead,” he is trying to reclaim the narrative and tell Miles’s story from his perspective--the perspective of another talented, highly visible Black man living through strange and violent times. The fact that he had to add McGregor to get the film financed is evidence of how little has changed over the past sixty years, because it reveals that the white character still functions as the universal default whose views are shared by all. (The character of “Marilyn” in the ‘60s TV series, “The Munsters,” effectively exploits and parodies the studio’s insistence on a “relatable” character whose reactions stand in for the “normal” viewership.)

Ironically, “Miles Ahead” may well end up a better story because of the presence of McGregor’s invented character as a disreputable journalist who ends up befriending Davis, in the same way that the sudden appearance of the Baroness in the Monk documentary is memorable precisely because it is so weird. Her awkward, complicated presence amid clusters of male jazz legends reminds viewers how far apart those worlds were--and still are. If Cheadle writes as well as he acts, “Miles Ahead” may well end up showing us how many miles we have yet to travel.