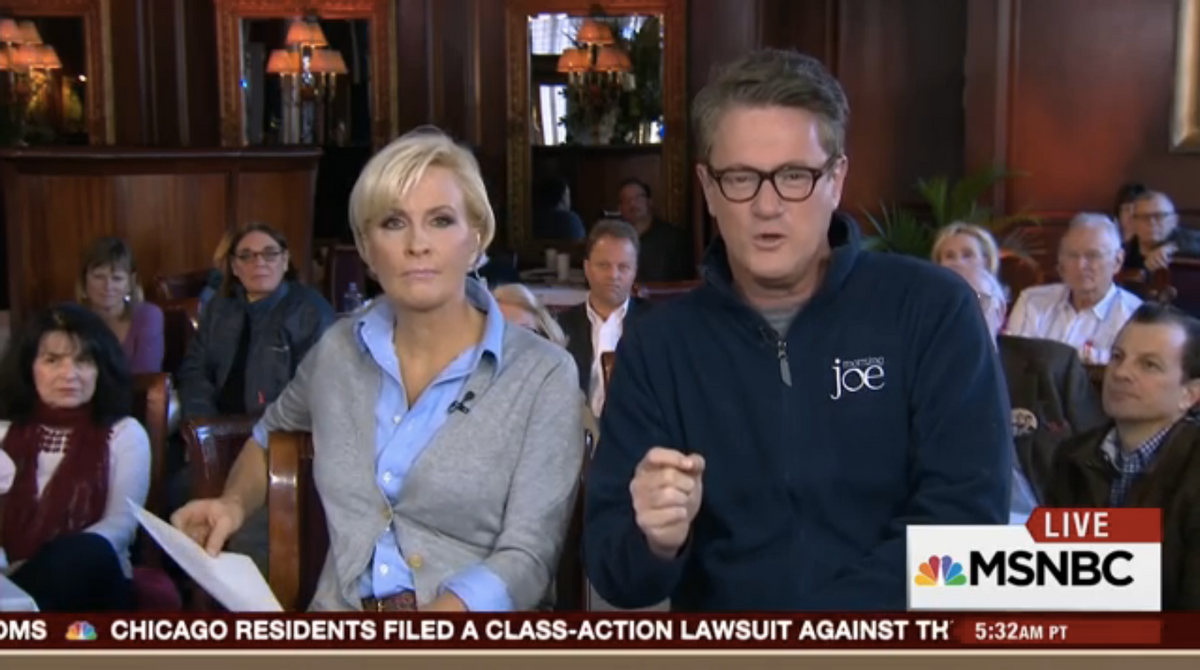 For all those people out there who have been claiming that Joe Scarborough is soft when it comes to Donald Trump, let this clip from Friday's "Morning Joe" show you just how wrong you are. In it, Scarborough is passionate, pugnacious and completely fired up about the GOP frontrunner:

Oh, wait. Never mind! That's actually Joe Scarborough being fired up about his own relationship with Donald Trump, not about any of the horrible things Trump has said or done.

Yes, Friday provided Scarborough, Mika Brzezinski and their regular crew of "Morning Joe" acolytes with a golden opportunity for that most hallowed of media traditions: A cable news hissy fit.

The catalyst for this lengthy tantrum was the chatter that's been going around lately about how friendly Scarborough and Brzezinski appear to be with Trump. Scarborough and Brzezinski seethed on Friday that this narrative has been ginned up by media rivals like CNN who are "humiliated" because "Morning Joe" caught on to the seriousness of Trump's appeal more quickly than they did.

"If you don't stand on top of him with your knees on his chest and stab him in the side of the neck until he bleeds out, it's never going to be enough," Scarborough said.

Poor Joe and Mika, so besieged by the haters. What have they ever done to deserve this kind of slander?

First of all, if you have to take ten minutes out of your news program to yell about how wrong your critics are, you've landed yourself in a bad place. Contrary to what Scarborough and friends might have you believe, these charges are not coming out of nowhere.

It's also that the two camps are so obviously friendly on the air. The Washington Post's Erik Wemple, whose dissection of the Trump-Scarborough relationship triggered a particularly acidic response from Scarborough on Friday, compiled a fairly damning montage back in December showing Trump, Scarborough and Brzezinski yukking it up on air, month after month. Scarborough has repeatedly defended Trump against his critics. His clear warmth towards the billionaire candidate has been so pronounced that radio host Hugh Hewitt even speculated that Trump might pick him to be his vice presidential nominee—and Scarborough didn't completely laugh off the idea.

"Oh, I’ll take a weekend at [Trump's resort] Mar-A-Lago," he joked, adding that Trump was "the smartest guy I’ve ever seen in my political life." Such a stinging assault!

Then there was the town hall that Scarborough and Brzezinski did with Trump earlier this week. The overall tone of the session was more like an amiable chat than the serious grilling one might expect or hope for. While both hosts spent minutes on Friday claiming that they were sharp and tough, most observers felt otherwise. Slate called the hourlong event "disgraceful." Wemple noted that Trump's extremist bigotry went virtually unmentioned. It was not a good display of Scarborough and Brzezinski's supposed forensic abilities.

Not that this should be especially surprising. Scarborough has something of a habit of playing favorites, after all. "Morning Joe" was notorious a few years ago for the red carpet it kept rolling out for Chris Christie long after the shine wore off the New Jersey governor. There have also been rumblings about his personal feud with Marco Rubio.

Of course, while "Morning Joe" is certainly a prime example of the clubbiness that defines much of the elite media's relationship to politics, Scarborough isn't the sole villain in this world. Trump's rise has been definitively aided by the unbelievable amount of news coverage given to his every waking thought. His status as instant ratings gold—well, except, ironically, for that "Morning Joe" town hall, which lost to CNN—and his obsessive desire to be interviewed have ensured that, no matter how horrible his views get, he'll have a series of ready platforms waiting for him. Scarborough's problem is that his platform is the coziest one of them all.