The GOP machine can't touch Donald Trump: Why his heretical 9/11 claims won't even slow him down

Whether taking on GOP sacred cows are being caught in flat-out lies, Trump always manages to survive for a reason 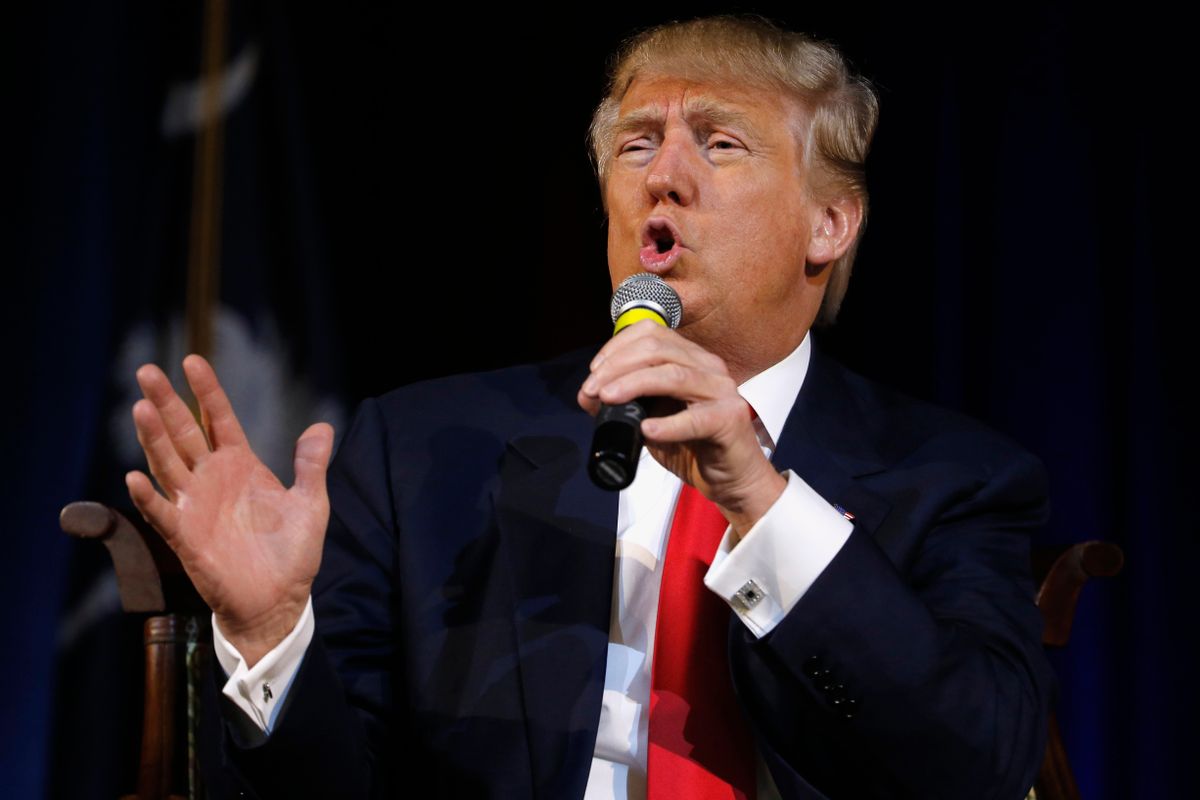 Donald Trump gave a good Town Hall performance last night on CNN. Sure, he said the same insane stuff he's been saying for months, but for people who only see him in snippets on the evening news ranting about Mexicans or Muslims, he probably seemed pretty human. He dodged all the usual questions with his usual bravado and obsessed about his own greatness. But he was comfortably sitting down and seemed relaxed and confident and unintimidating. After all, he's not really a politician, he's a celebrity. He dished on his famous friends and his three beautiful wives and their children and talked about how very, very rich he is. He even shared that he's a clean freak who prefers to eat at fast food chains like McDonalds on the road because he thinks they have higher sanitation standards. It was more like watching an Oprah interview with a TV star than a political interview.

That this happened on the same day that Trump got into a huge public fight with the Pope makes it all the more amazing. But then that's Trump's specialty. He makes sure he dominates the news cycle somehow. By day he's calling out the Pope and by night he's talking about his pal Michael Jackson's plastic surgery. Frankly, he's just more interesting than any politician out there. It's a shame about his authoritarian white nationalist program and the fact the job of president requires many more skills than those that have gotten him this far.

This is not to say that he didn't have to answer political questions from the audience. But they all seemed in awe of him, even the one who tried to corner him for boldly declaring that Bush was president on 9/11 and that "they" lied about the WMD in Iraq. The questioner told Trump that he had a great deal of respect for George W. Bush and said those comments had "stung him very deeply." And then he plaintively begged, "with some time passing have you thought about that? Would you rethink that?"

Needless to say Trump has not rethought it and has no intention of rethinking it. (After all, this is a man who calls himself a Christian but says he's never once felt the need to ask God for forgiveness.) In fact, he took his complaints even further, saying that not only did Bush make the worst decision any president has ever made but he caused the rise of ISIS, the Syrian refugee crisis and turned all of Europe into a seething hellhole. He repeated over and over again that Iraq didn't take down the World Trade Center and even made this odd comment:

The hijackers never got on a plane to anywhere since they were all dead. And if he's referencing rumors that members of the Saudi Royal family were spirited out of the country it's a very weird way of putting it. Basically that's Trump rambling incoherently on the subject. But if there's one thing Trump has been crystal clear about from the beginning is that he (and he alone, apparently) knew Iraq was a mistake and he made it known that he was against it.

But then this happened:

COOPER: I literally was just handed this. There’s a report out on BuzzFeed, including an audio clip of what appears to be you on Howard Stern talking on the radio on September 11, 2002. He asked you, ‘Are you for invading Iraq?’ You said,  ‘Yeah I guess so. You know, I wish it was done correctly the first time.’ Is this accurate? Do you remember saying this?”

TRUMP: No, but I could have said that. Nobody asked me. I wasn’t a politician. This was probably the first time anybody asked me that question. But by the time the war started…

COOPER: 2004—there’s a Reuters article which you pointed to a lot, and there were a couple comments you made at a Vanity Fair party, that were a couple of weeks after the war began.

TRUMP: Which is OK. A lot of people said it was so early, even if it was a little bit after the war. I was very much against it. That was probably the it — the first time I was asked about the war. He’s a great guy. Howard. Howard Stern…

COOPER: He is a great interviewer

Millions of people were against the war long before it started. There were protests all over the world. Trump was no oracle on this issue. Not that any sentient being ever thought he was.

The real question is whether his followers will care about this and the answer is no. Brian Beutler at The New Republic explained exactly why that is:

One of Trump’s most mysterious political skills is his ability to lie brazenly and suffer no political repercussions. Months on, the media and his opponents are deeply invested in making one of his lies stick. But it won’t be this one. Trump’s recollection, even if still exaggerated, will ring credible because it tracks the way the public’s view of the Iraq war changed over time. Trump clearly wants more points for prescience than he deserves, but he’s ultimately arguing that he reached the correct position on Iraq a good decade before any of his opponents. I think that’ll carry more weight with potential supporters than the implication that he claimed to be opposed to the Iraq war in 2002, when it was really more like 2004. And so it should.

He's absolutely right and there's evidence to back it up.  This article by Trip Gabriel appeared a couple of days ago in the New York Times:

Mark Jebens, a veteran of 22 years in the Marine Corps, found no fault with Donald J. Trump’s scathing criticism that President George W. Bush “lied” about weapons of mass destruction while leading the United States into war in Iraq.

“At the end of the day, a lot of good Marines and sailors and airmen died over something that wasn’t there,” said Mr. Jebens, who served three combat tours in Iraq. “So you’ve got to ask tough critical questions. In the military we called it a debrief or a hot wash.” [...]

[N]umerous military veterans interviewed at Trump rallies in South Carolina this week, including Mr. Jebens, said they had no problem with Mr. Trump’s comments, even if they did not entirely agree with him.

At the same time, the stubborn popularity of Mr. Trump, who defies Republican orthodoxy on issue after issue, shows how deeply the party’s elites misjudged the faithfulness of rank-and-file Republicans to conservatism as defined in Washington think tanks and by the party’s elected leaders.

These are southern conservative military veterans. If they do not see Trump's apostasy on Bush and the war as a deal breaker, then it isn't a deal breaker.

As I've been writing for quite a while, the Trump phenomenon has exposed something completely unexpected about the Republican coalition, even to people who have spent years observing it. It comes more and more into focus every day: It turns out that a good many members in in good standing of the conservative movement don't care at all about  conservative ideology and never have.

It was always mystifying why crowds at George W. Bush rallies would cheer ecstatically whenever he would say the words "tort reform" or get excited when he would talk about reducing the deficit. Why would all these people be so emotional about such abstractions? Indeed, why did they completely lose their minds over the government passing a health care plan? Sure, it was understandable that they might not think it was a good idea, but the hysteria it caused was monumentally over-the-top. You would have thought it was a revolution or a coup.

But all that emotion was never really about any of that. They weren't strong believers in "small government" and their insistence on "family values" were just totems of tribal identification, not meaningful in themselves. These were signals for something else entirely.

Trump's campaign is shocking conservative-movement true believers to their cores and it isn't just the small government types or the military hawks. As the Atlantic reported recently, this schism is evident in every faction of the GOP, even among the faithful:

[...] Nonetheless, Trump is currently leading among white evangelical voters, many of whom are willing to forgive his theological lapses in favor of other appealing qualities. “Spirituality is a big issue, but we need somebody who’s strong,” a Kentuckian named Charles E. Henderson told the New York Times. “Lots of times the preachers and everything, they have a tendency to be just a little bit weak.”

Trump’s success with this group exposes a rift in the religious right akin to the one in the broader GOP: Its leaders don’t necessarily speak for their followers. As Matthew Lee Anderson put it, “While the evangelical leadership has gone other directions, the laity has its own attitudes and impulses—and those have more in common with Trump than most evangelical leaders would like to admit.”

The chattering classes like to say "the GOP base is frustrated because conservative leaders let them down so they are turning to Trump as a protest." This misses the point. They did let them down but not because they didn't fulfill the evangelical/small government/strong military agenda. They let them down because they didn't fulfill the dogwhistle agenda, which was always about white ressentiment and authoritarian dominance. Trump is the first person to come along and explicitly say what they really want and promise to give it to them.

No more beating around the Bush (no pun intended), Trump comes right out and says it.  It turns out that the three legged stool of the GOP (small government, traditional values, strong military) is just a pile of wood. Donald Trump has poured gasoline on it and lit it on fire. And a good number of GOP voters are whirling and dancing around it in ecstasy. They didn't care about ideology. They just wanted to feel some heat.