Many young women support Bernie for economic reasons rather than Hillary for gendered ones. Is that so hard to get? 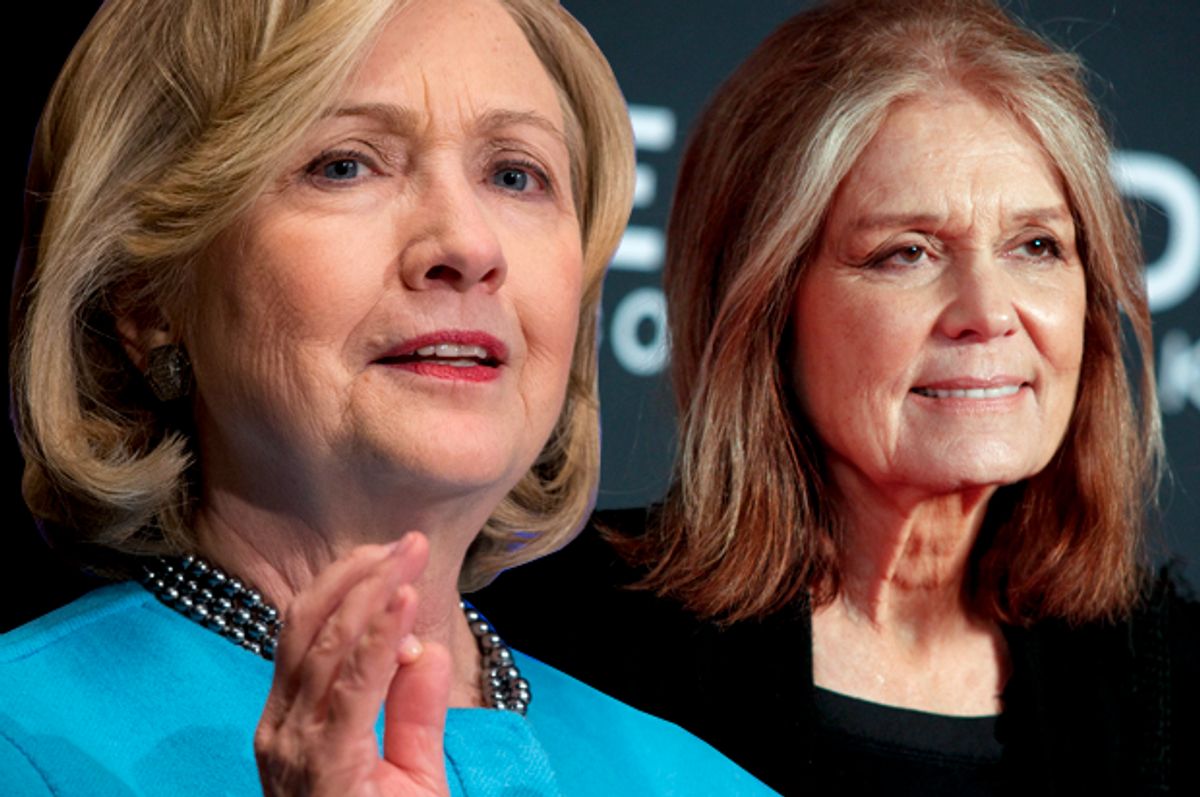 Facebook
Twitter
Reddit
Email
view in app
This campaign season has been pretty bleak on the gender front, from Marco Rubio’s assurance that he understands rape victims’ “terrible situation,” but would require them to carry any resulting child regardless, to Trump’s “blood out of her … wherever” comment heard ‘round the world. Even so, this moment stood out as a new low for women, particularly millennial women. At a rally for Hillary Clinton in Manchester, New Hampshire, Madeleine Albright scolded young women for betraying their elders. “We can tell our story of how we climbed the ladder, and a lot of you younger women think it’s done,” she said, referring to the fight for women’s equality. “It’s not done. There’s a special place in hell for women who don’t help each other!” Clinton, standing next to her, doubled over in what looked like genuine, if shocked, laughter before recovering, taking a long drink of water and slowly shaking her head.The night before Albright’s comment, the inimitable Gloria Steinem appeared on “Real Time With Bill Maher,” and gave her own assessment of millennial women. Maher asked the legendary feminist why young women don’t support Clinton in greater numbers. “Women radicalize as they get older,” Steinem said, as “they lose power.” She went on, “When you’re young, you’re thinking, ‘Where are the boys? The boys are with Bernie.’” The studio audience, which had been cheering and clapping to this point, was silent. Maher nearly choked. “Oh. Now if I said that, ‘They’re for Bernie because that’s where the boys are,’ you’d swat me.”

I wish he was right, but I don’t believe that she would. As a Ph.D. candidate who studies the recent history of rights, and as a millennial woman in the midst of my own late-20s feminist awakening, I was unsettled by how glibly Steinem and Albright dismissed the possibility that young women who support Sanders could have any legitimate political reasons for doing so. Their comments reveal a failure to see that, for many millennial women—from poor single mothers to degree-holders saddled with student loan debt—economic issues may loom larger in their minds and lives than more traditional “women’s” issues. At the UN’s Fourth World Conference on Women, in 1995, Clinton gave a speech famously titled “women’s rights are human rights”; it is just as true that economic issues are women’s issues.

History is catching up with Steinem and Albright's generation of feminists. The feminist movement has, since its inception, willfully elided issues of race and class in its zeal to advance a clear-cut feminist agenda. In the late 1960s, radical feminists defined themselves against what they saw as the anti-feminism of the left, consciously privileging gender over other issues in a response to a leftist preoccupation with class and race.

They may have gotten away with this into the 1990s, when wages were increasing and the argument could be made that propping up women as such was good for all women, regardless of racial or economic difference. But since then we have seen the erosion of social protections, welfare in particular, the very programs the last President Clinton helped to erode. The financial crash of 2008 was a defining moment of many millennials’ lives, women and men alike, arriving just as they were entering college or the professional world and profoundly redrawing the map of their future. In failing to understand why young women would support Sanders for economic reasons rather than Clinton for gendered ones, Steinem and Albright reveal that they missed the part of recent history where capitalism failed people, young people and women in particular, whose Great Recession reality hardly matches their parents’ and grandparents’ upwardly mobile hopes. And they seem to have missed the part of their own history, where the system they fought so hard to allow women to participate in--the same system that Clinton, with her financial ties to Wall Street, and Albright, former board member on the New York Stock Exchange, do participate in--not only failed to deliver liberation and equality, but actually blew up in their faces.

According to ABC exit polling, 82 percent of Democratic women under 30 voted for Sanders in Tuesday’s New Hampshire primary. If you believe Steinem, that means that there were a lot of boys at Bernie rallies in the Granite State, and a lot of not-yet-radicalized women thinking about their weekend social calendars instead of the future of their gender. Or maybe young women are more radical than Steinem gives them credit for. Are we really to believe that Clinton, a former first lady, senator and secretary of state, is more radical than a wild-haired socialist from Vermont?

Perhaps Steinem and Albright’s comments sparked such an outcry because the historical moment for educated, white, well-off women to claim a uniquely oppressed status solely on the basis of their gender has long since passed. The power they fought for—the power to participate in professional and political settings on the same footing as men, or to build their own equivalents—may not be the power many millennial women value most. For many non-white women, single mothers and others who feel economic hardship, power comes with economic security. The more difficult truth for feminism is that wage equality isn’t enough if men and women alike don’t make a living wage.

Steinem and Albright may very well understand this. Their comments about young women may come from the frustration of realizing that structural and institutional change regarding women’s issues has not been complete, and that the younger generation of women has taken up a different mantle. And even they have reverted to the time-honored tradition of blaming women’s problems on women; blaming them for failing to pull themselves up and fix their problems on their own. But millennial women live in a different world than the feminists of the 1960s and 1970s, one in which the most pressing issue in our lives does not have to be the fact that we are women. The idea that women are a mosaic, rather than a homogenous mass, has been a feminist fault line from the start. The 2016 campaign may reveal just how far that fault has slipped.

Peggy O'Donnell is a Ph.D. candidate at the University of California, Berkeley, writing about the history of human rights, and a researcher for the Technology Program at the Human Rights Center at Berkeley Law. She tweets at @theAccidentalAc.