Serbian officials say they were close to freeing the two ISIS hostages, but U.S. airstrikes killed them 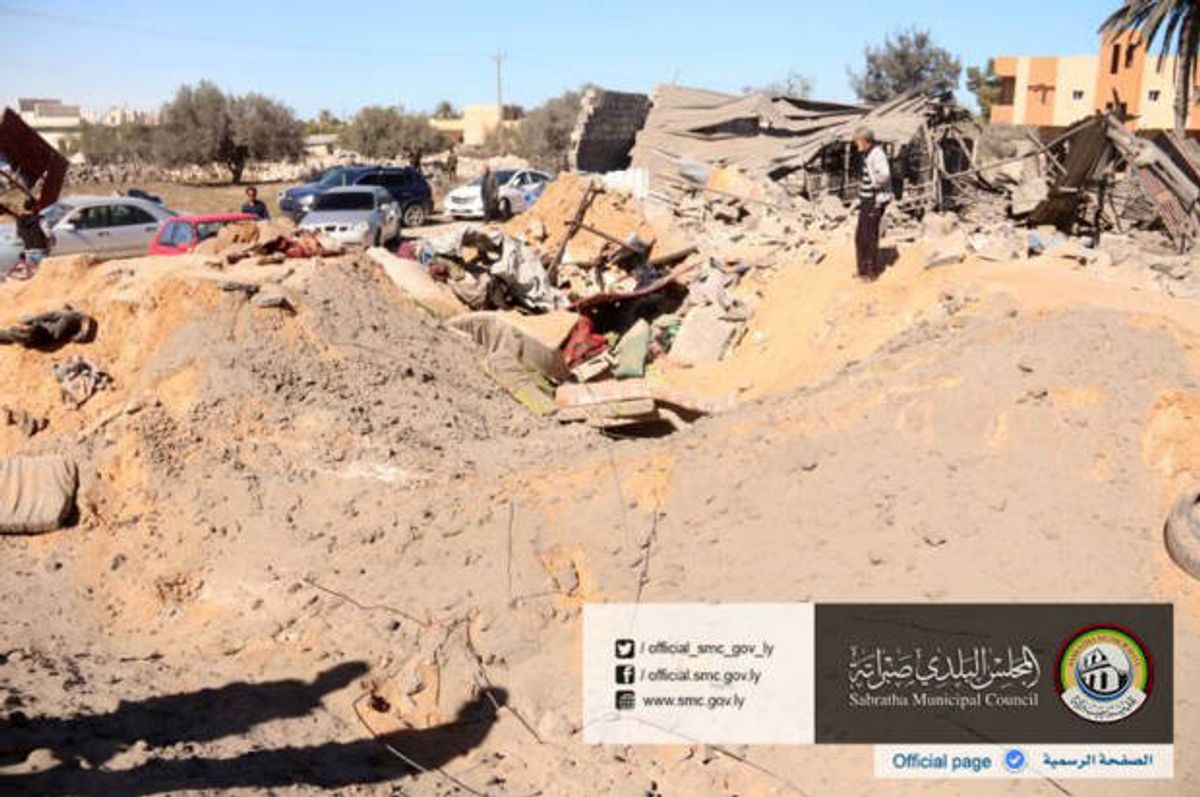 The site where U.S. warplanes struck an ISIS training camp in Sabratha, Libya, near the Tunisian border, on Friday, Feb. 19, 2016 (Sabratha Municipal Council via AP)
--

Just five years after leading a NATO war that destroyed Libya's government, the U.S. is launching a new bombing campaign in the oil-rich North African nation.

The U.S. carried out airstrikes on an ISIS-controlled area in western Libya on Friday, killing approximately 40 people. Among those killed were two Serbian embassy workers who had been held hostage by the extremist group for months, AP reports.

Serbian Prime Minister Aleksandar Vucic, AP noted, "said there was no doubt that Sladjana Stankovic, a communications officer, and Jovica Stepic, a driver, were killed in the American bombing."

"Apparently, the Americans were not aware that foreign citizens were being kept there," the prime minister remarked. "But that will always remain an unknown fact to us."

Foreign Minister Ivica Dacic said Serbia, which knew the exact location of the hostages, was working on their release. Libyan troops were discussing a potential rescue operation.

"I believe we had been close to the solution for them to be freed," he told AP. "Unfortunately, as a consequence of the attack against ISIS in Libya, the two of them lost their lives."

"No one had informed us that the attack will take place," Dacic added.

The two men were kidnapped in November, when their diplomatic convoy was attacked near the northwestern coastal city of Sabratah. They had been transporting Serbian ambassador Oliver Potezica to neighboring Tunisia. Potezica and his wife and two sons managed to escape, but the two embassy workers were captured.

U.S. and local officials claim an ISIS militant they say was responsible for massacres in Tunisia last year was killed in the bombing.

The U.S. dropped at least 23,144 bombs on six Muslim-majority countries in 2015. It is presently waging bombing campaigns in at least seven countries: Syria, Iraq, Afghanistan, Pakistan, Yemen, Somalia and Libya. The Obama administration has not officially declared war in most of these countries.

NATO's 2011 war, which was led by Democratic presidential candidate Hillary Clinton — who was secretary of state for the Obama administration at the time — destroyed the government of longtime Libyan dictator Muammar Qaddafi, plunging the oil-rich nation into violent chaos.

When Qaddafi was gruesomely killed, sodomized with a bayonet by rebels, Clinton declared live on TV "We came, we saw, he died."

Libya's dysfunctional internationally recognized government now only controls eastern parts of the country. The capital, Tripoli, is under the control of Islamist Libya Dawn militias, which also govern much of the west of Libya.

A variety of rebel armies and extremist groups are vying for power in a civil war that has displaced hundreds of thousands of Libyans and left thousands dead.

Amid the chaos and destruction left in the wake of the U.S.-backed war, al-Qaida has expanded. With brutal violence, ISIS has established its largest base outside of Iraq and Syria in the war-torn North African nation.

Despite the disastrous results of the previous U.S.-backed bombing campaign, the Obama administration is ramping up military activity in Libya. Friday's airstrikes were at least the second known U.S. bombing in the past three months.

Sen. Bob Corker, the chairman of the Senate Foreign Relations Committee, revealed in early February that the U.S. was "on the verge of taking action" against ISIS in the country.

The editorial board of the New York Times, which supported the NATO war in Libya, warned in late January that this "significant escalation is being planned without a meaningful debate in Congress about the merits and risks of a military campaign that is expected to include airstrikes and raids by elite American troops."

"That is deeply troubling," the Times editorial board wrote. "A new military intervention in Libya would represent a significant progression of a war that could easily spread to other countries on the continent. It is being planned as the American military burrows more deeply into battlegrounds in Syria and Iraq, where American ground troops are being asked to play an increasingly hands-on role in the fight."