Nina Simone’s “Strange Fruit”: Inside the Jim Crow childhood of the High Priestess of Soul

The late singer, subject of a documentary up for an Oscar next weekend, would have been 83 today 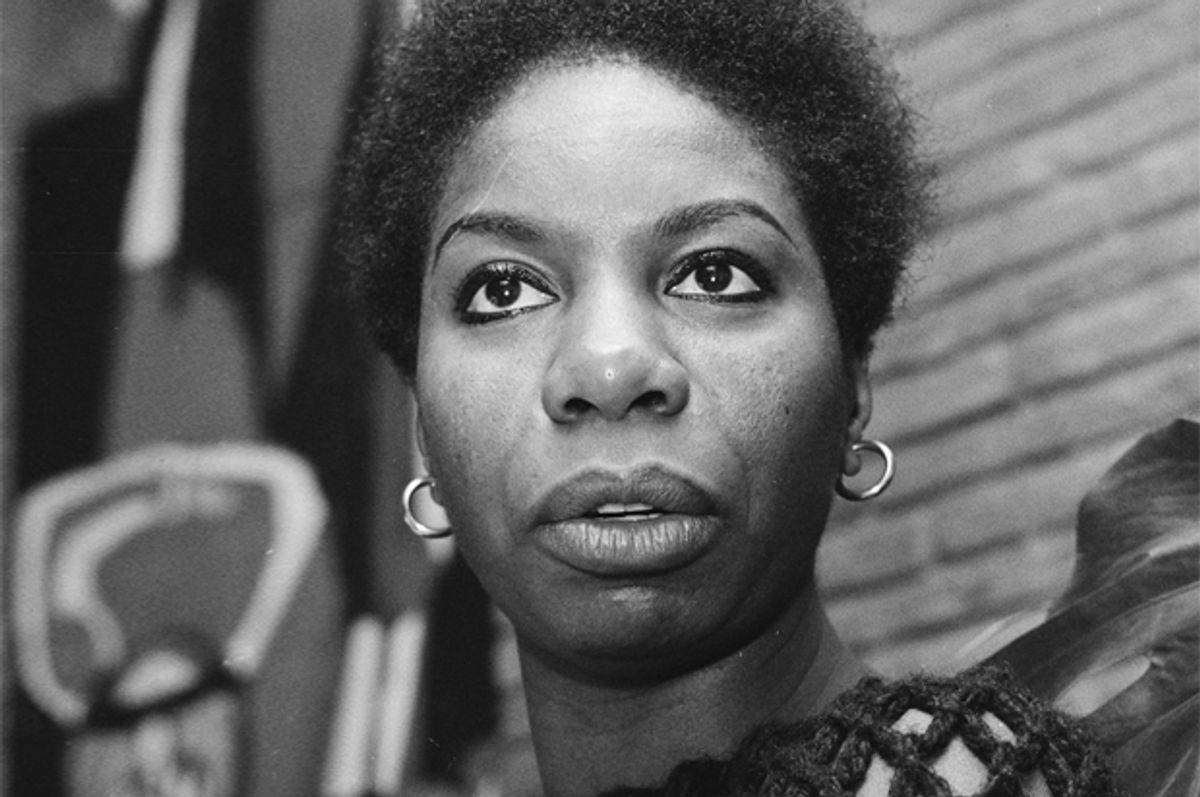 When “Guardians of the Galaxy” and “Avatar” star Zoe Saldana was cast as Nina Simone in the yet to be released biopic “Nina,” much was made of the fact that Saldana’s skin was darkened for the role.

Simone’s daughter told the New York Times, “My mother was raised at a time when she was told her nose was too wide, her skin was too dark … Appearance-wise this is not the best choice.”

There’s an important intersection between Nina Simone’s dark skin color and her political awakening, underscored by her 1965 rendition of the anti-lynching ballad “Strange Fruit.” Simone’s version of the classic song is especially powerful given her own childhood in the Jim Crow South, where violence was a part of the landscape.

“Strange Fruit” has always been Billie Holiday’s song. In 1939 Holiday took Abel Meeropol’s song and transformed it into a bitter lamentation on the apotheosis of Jim Crow-era race relations in the United States—the fact that the life of a black man meant very little in this country.

Nina Simone’s version, the next to last track on her 1965 album “Pastel Blues,” picks up where Holiday left off. Simone biographer Nadine Cahodas points out that Simone’s version of “Strange Fruit” sounds more like an “indictment, not a lament.”

Simone herself once said “Strange Fruit” was “the ugliest song I have heard. Ugly in the sense that it is violent and tears at the guts of what white people have done to my people in this country.”

When she sings it, that ugliness comes through. She snaps and spits it out; every syllable is painful. In 1965 a French critic wrote that she “attacked” the song. The verb is apt. Unlike Holiday’s version, Simone’s begins with no introduction, just a note and then, “Southern trees bearing strange fruit.” By the time she gets to the final verse, she wails the words, holding the note of the next to last line for 10 ominous seconds.

“Strange Fruit” was a song that fit that cultural moment because it underscored the reasons for the shifting national tone on race. Peaceful resistance and gradual change weren’t working for everyone. And now, it would seem, it’s a song for our current social and cultural moment as well.

Nina Simone was born Eunice Waymon in Tryon, North Carolina, a mountain retreat that attracted the likes of F. Scott Fitzgerald, Eleanor Roosevelt, George Gershwin and Lady Nancy Astor, at one time or the other.

As a child, Eunice’s musical gifts were cultivated by friends and family, but others outside Tryon’s close-knit black community were listening as well. Her talent became a source of community pride and pleasure—to the extent that she was able to use it to challenge Jim Crow. When she was 11 she gave a recital and before it started her parents were told to move from the front row so a white family could sit there. She told the audience she wouldn’t play unless her parents were allowed to sit where they were sitting.

But there were some things Eunice Waymon couldn’t change. A childhood friend of hers named Fred Counts told me that she was remarkable, brilliant academically and emotionally—introspective beyond her age.

One summer day Counts ran into Eunice as she was making her way home from a piano lesson. The two stopped at a pharmacy for sodas and kept walking homeward. Counts says she became unusually quiet and then said, “You know, we don’t serve the same God.” He looked at her confused, “Eunice, what are you talking about?” She said, “Well, we go in the drug store and we buy our sodas and we gotta drink ‘em walking up the hill. And they’re sitting under them Casablanca fans cooling off.”

In her autobiography “I Put a Spell on You,” Simone is ambivalent about growing up in Tryon. While race relations may have been generally “cordial,” she writes, “there was no policy of racial justice in Tryon.” Simone remembers that the day after she stood up for her parents at the piano recital she “walked around feeling as if I had been flayed and every slight, real or imagined, cut me raw. But the skin grew back again a little tougher, a little less innocent, and a little more black.”

In a sense, she’s saying that her skin was a marker for the viciousness of her experiences.

Nina Simone biographer David Brun-Lambert claims that while there was segregation, “White and black communities lived in peace—there were no lynchings in Tryon, no racial violence of any sort.”

It’s true that there are few stories of gross violence against black people within the city limits of Tryon during Eunice Waymon’s childhood. But the possibility of racial violence was ever-present. Locals speak of the Klan’s presence in the area lasting well into the 1980s.

At one point she heard that a “lynching” had happened close by and she asked her father what the word meant. He didn’t answer.

If Simone’s father had replied, he might have told her about Dick Wofford, a local black man accused of raping a white woman in 1894. Wofford was tried in the Polk County Courthouse in Columbus, just down the road from Tryon. A jury of white men found Dick Wofford not guilty. The sheriff quickly released Wofford, pointed toward some woods behind the courthouse and told him to run for his life.

The next morning Dick Wofford was found dead, hanging from a wild cherry tree—three miles from Eunice Waymon’s birthplace.

There was no song written about Dick Wofford. He was just another lynching story passed along from one black person to the next like the story about George Green (lynched the year Waymon was born over the border in South Carolina) or Willie Earle (lynched in nearby Greenville in 1947, the year Waymon started boarding school in Asheville). Such stories and the daily indignities of racism must have imposed a quiet and horrible discipline that young Eunice Waymon would have felt personally.

After she graduated from high school in 1950, Eunice Waymon was turned away from Philadelphia’s Curtis Institute and took a gig singing in an Atlantic City nightclub. She changed her name to Nina Simone and developed from night club chanteuse to High Priestess of Soul, provocateur and political activist.

Throughout the '60s, her friends cultivated her political awareness—people like Langston Hughes, Leroi Jones (Amiri Baraka), James Baldwin and Lorraine Hansberry—a transformation detailed in Liz Garbus’ Oscar-nominated documentary, “What Happened Miss Simone?” Simone performed at numerous benefits for civil rights organizations like CORE, NAACP and SNCC. She performed down South, too, including during the Selma to Montgomery march.

In 1963, her songwriting took a dramatic shift with “Mississippi Goddam,” a response to the bombing of Birmingham’s 16th Street Baptist Church. The song was written a month after Martin Luther King Jr.’s March on Washington and struck a very different chord—no longer interested in the mantra of “Go slow,” Simone sings, “I don’t trust you anymore.” She wasn’t afraid to take on the slow-moving liberals or ignore America’s violent past. This is an important shift toward the self-determining ethos of black power. While some sang “We Shall Overcome,” Nina Simone sang her tough rendition of “Strange Fruit.”

Nina Simone returned to Tryon in 2001 for her mother’s funeral. Fred Counts saw her resting in her car and walked over to say hello, but was blocked by a bodyguard. Simone saw her old friend and told the bodyguard to let him by.

“I grew about 2 inches!” Counts said.

Simone and Counts reminisced about the past—she spoke of her persistent anger over the things she experienced growing up in Tryon.

“And I told her,” Counts said, “you can understand your life by looking back, but you gotta live your life moving forward.”

Counts told me that the song that he thinks best depicts her childhood is “To Be Young, Gifted, and Black” and he gave me the lines, “Young, gifted and black/ How I long to know the truth/ There are times when I look back/ And I am haunted by my youth.”

When I interviewed him, just a few years before he passed away, Counts was in his late 70s, but it didn’t show. His svelte frame was covered by a white polo shirt, gray slacks and dark loafers. A straw newsboy cap was perched on his head. In a soft baritone he told me that during Jim Crow, black people in the South learned the rules and where they stood in the game at a young age.

“I never rode in a school bus,” he explained. “Black folks never had a school bus. We used to get a half-day off for the annual Tryon horse show, but we couldn’t go to it unless we were working in the stables or cooking.”

The rules were passed down from one generation to the next. His own parents had been sharecroppers in South Carolina. When they moved to Tryon, he said, “They were fleeing. It was worse down there. Now let’s understand this. There ain’t a thing you can do about what happened yesterday. You can’t add to it or take anything away from it.”

But I have a hard time believing that he believed that himself.

Right before I left he remarked, “You know, what my ancestors were denied, it crippled the next few generations. They were kept in the field and couldn’t afford to send us to college. And then I couldn’t go to certain schools or get certain grants. Jim Crow did a lot of things that weren’t acceptable. It still penetrates.”