Behind the music on "Vinyl": There are Strokes cover bands that sound more like Lou Reed than this 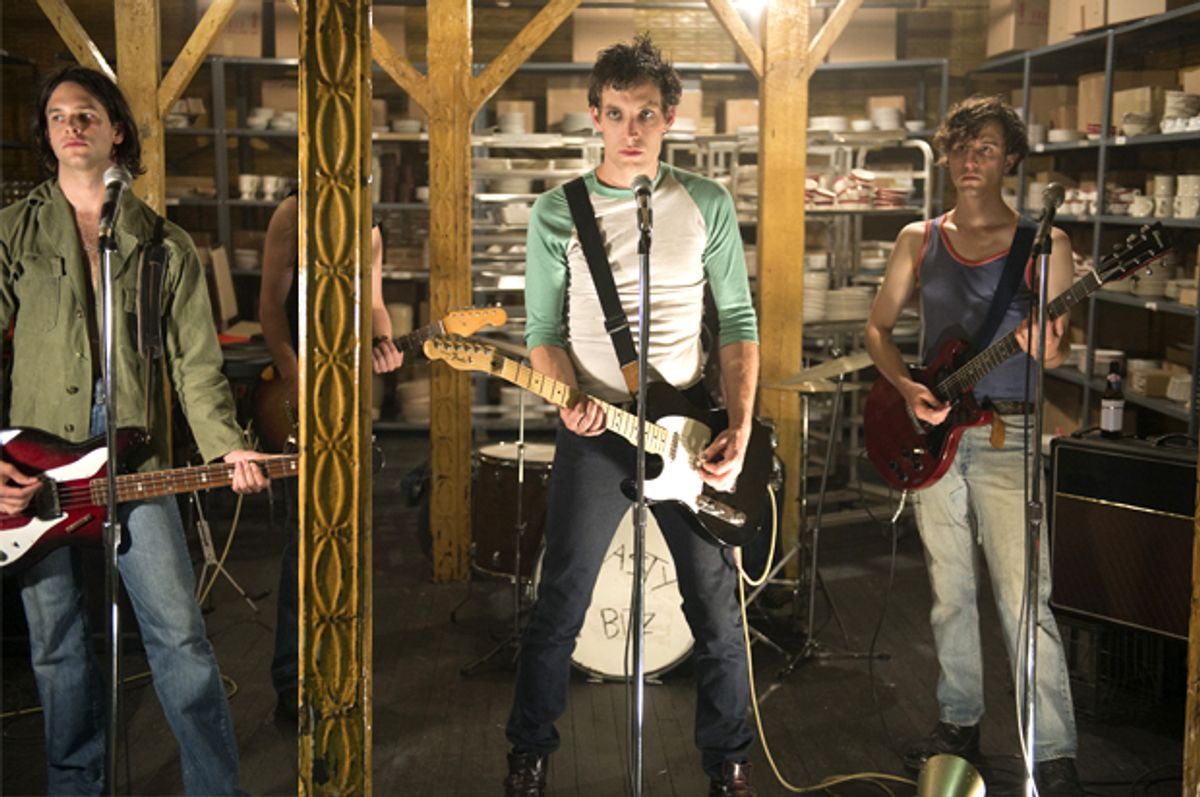 Episode #2 of “Vinyl,” the new HBO drama from Martin Scorsese and Mick Jagger, begins by bringing us into the middle of Richie Finestra’s (Bobby Cannavale) all-night cocaine-fueled bender after surviving the collapse of the Mercer Arts Center during a concert by the New York Dolls. (We covered this in the recap of the premiere: the building did indeed collapse in August of 1973, but the Dolls were not onstage at the time).

The next morning, Richie is late for a meeting with the executives from German Polygram, waiting for him to sign the deal turning over American Century, his record company. While they wait, his colleague Zak Yankovich (Ray Romano) vamps to cover his absence, regaling the Germans with a story about the Who: “I think it was ’68—yeah, it’s me, Daltrey, Keith Moon, and the manager; Townshend, he’s already is at the arena doing the soundcheck. We get in the car, we start heading out, and Moon says, ‘Stop, stop, I forgot something,’ and runs back in the hotel. Five seconds later, a TV set comes crashing out on the pavement. He jumps back in the car—‘Well, that was close, nearly slipped my mind,’” Zak says, with a terrible English accent. “Only in rock and roll.”

Aside from a minor detail — The Who were actually on their way to the airport — yes, according to legend this story did happen, in pretty much the way Zak describes.

A few beats later, we hear “The Jean Genie” by David Bowie pulsing faintly in the background over the action. The song gradually increases in volume, as the camera pans through reception, where one of the A&R reps holds open an industry magazine that’s likely Billboard, with the comment, “Chicago’s number one again? Who the hell’s buying that shit?” This would have been “Chicago VI,” which was released on June 25, 1973, and given this was the band’s sixth such outing, clearly a lot of people were buying that shit. “Chicago VI” would spend five weeks at #1 on the Billboard Pop Album (now the Billboard 200) charts. Here’s one instance where “Vinyl” is absolutely historically accurate: the Mercer Arts Center collapsed on August 3, and that corresponds exactly with the weeks that “Chicago VI” held the #1 spot — the July 28, August 4 and August 11 charts.

As “The Jean Genie” reaches full volume just before the chorus, the elevator doors open and Richie makes his entrance, covered in dust, almost vibrating. This is the moment where it all comes together: the pacing, the beats, to get to this moment in the song tied into Richie’s arrival. The pace is manic, and after all, the Jean Genie “loves chimney stacks” — a tale of excess where the emotional stakes get higher and higher with each chorus and bridge.

The song continues as Richie tells his partners that he survived the collapse of the Mercer, that he has seen God, and has a insane meltdown. The music switches to “Is It In My Head?” from the Who’s “Quadrophenia.” It’s another utterly ideal pairing with the action in the scene — the song where Jimmy, the album’s hero, has his own reckoning coming down after a high.

Of course, we only get this for about 20 seconds, because for some reason the music has to switch to a Jerry Lee Lewis imitator of very low quality; we haven’t had a flashback in a few minutes to remind us of the roots of rock and roll for reasons that are entirely unclear to the current plot point.

“Rock and roll…that fucking energy, man! Forget Yes, man, forget Emerson, Lake and Palmer!” Richie rants as his justification for blowing the Polygram deal ... before putting on a Black Sabbath t-shirt to replace the shirt ruined in the building collapse.

In the meantime, Richie’s wife Devon (Olivia Wilde) is having a flashback in the ladies’ room at a Friendly’s, remembering when she first met him in 1966. Cut to: the Velvet Underground and Nico performing “Venus In Furs” at what’s likely meant to be the Electric Circus, a club on St. Mark’s Place in New York City. In 1966, this performance was technically billed as The Exploding Plastic Inevitable, which was the VU and Nico along with Warhol Factory denizens Gerard Malanga and Mary Woronov and a light show, which “Vinyl” does a reasonable job approximating. (Gerard is the guy with the whip dancing behind Nico.) So far, this is all true and correct, even Devon’s assertion that “You know, this whole show is Andy’s idea.”

But the faux Velvet Underground is unilaterally awful. Like with Led Zeppelin in the pilot, here is a pivotal plot scene, an important historical moment, and it sounds like a high school band. There are Strokes cover bands out there that sound more like Lou Reed than this Lou. Maureen Tucker was in her own way far more in the pocket than this Mo; John Cale and Sterling Morrison are just out of tune. The thing you hear above everything else is Nico’s tambourine, and while that might have very well been Warhol’s intent, there is literally no way you would have heard her in the morass of sound onstage, especially since on film she’s nowhere near a microphone. “Run Run Run,” the song playing while Richie and Devon are having sex in the bathroom, is even worse, and there’s no excuse since it’s a fairly straightforward rock and roll construct.

Richie’s speech to rally the rock and roll troops of the A&R team is hyperbolic and hysterical, ripping a Jethro Tull album off the turntable and breaking it in half over his knee. “I want new, fast, fresh, exciting,” Richie says. “Can you hum it? Does it make you want to call the radio station and find out who the band they just played was?” Forget the rest of the speech, that’s the best line of the episode, because more than anything else, it captures the essence of something that no longer exists. It’s a moment that will mean something to the people who grew up doing just that, and a slick but not heavy-handed reference to the past for anyone for whom the concept is completely foreign.

Before you snicker at the placement of “Under My Thumb” by the Rolling Stones at the beginning of the last of Devon’s flashback (where she’s brought Richie to the Factory, which appears as though it’s meant to be the original Factory on E. 47th Street, which maps correctly to the timeline) to meet Warhol, remember that the Stones were actually dark and edgy back then, and truly favored by the Warhol crowd, so it’s an appropriate choice rather than one selected by undue Mick Jagger influence. And at the very end of the scene, “Vinyl” offers a gesture towards redeeming its pedigree: as Warhol finally convinces Devon to sit for one of his famous screen tests, the background music is “Magic In The Moonlight” from Eric Emerson and the Magic Tramps. Eric Emerson is a largely forgotten Warhol superstar and NYC glam rock pioneer, who predated the New York Dolls and performed on the Max’s Kansas City/Mercer Arts Center continuum. It is a brilliant choice for this scene, and the type of artful reference we hope to see more of in future episodes of “Vinyl.”