Consensus gels that the delegate math is not in Bernie's favor 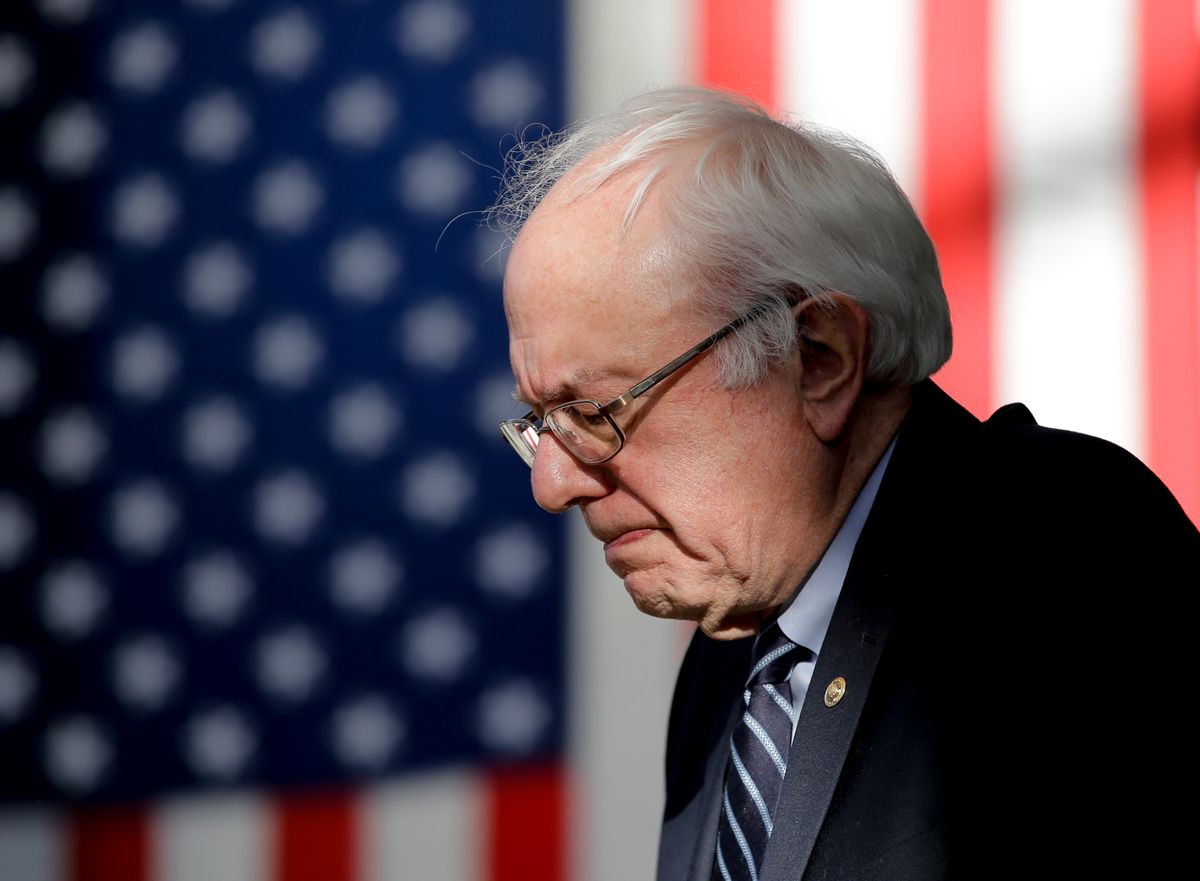 During his concession speech Saturday night, Bernie Sanders predicted that despite his loss in Nevada, "when Democrats assemble in Philadelphia in July at their convention, we are going to see the results of one of the great political upsets in the history of the United States.”

But according to a glimpse off the growing political media consensus Monday morning, Sanders' chances at waging a successful upshot challenge to Hillary Clinton greatly diminished over the weekend.

"But I think that after South Carolina, we have 11 states; we stand a good chance of winning a number of those states," Sanders said confidently during an interview with CNN on Sunday, pushing back on the emerging narrative that Sanders' loss in Nevada has slowed his campaign. "We think we have a whole lot of momentum."

Explaining away his loss in the Silver State, Sanders explained to NBC's Chuck Todd that "what I've said over and over again, we will do well when young people, when working-class people come out.”

"We do not do well when the voter turnout is not large. We did not do as good a job as I had wanted to bring out a large turnout.”

But Bernie's admission belies the foundation of the growing consensus among political pundits following the Nevada caucus: It's basically over for Sanders. Noting both the delegate count and the coalition (or lacktherof) Sanders' has amassed, many political observers have returned to calling the Democratic presidential primary an inevitable win for Clinton -- even if it hasn't turned out to be quite the coronation:

Noting the amassed delegate math in Clinton's favor, so far, the Times reports that "the odds of [Sanders] overtaking her growing increasingly remote":

Mrs. Clinton has 502 delegates to Mr. Sanders’s 70; 2,383 are needed to win the nomination. These numbers include delegates won in state contests and superdelegates, who can support any candidate. She is likely to win a delegate jackpot from the overwhelmingly black and Hispanic areas in the Southern-dominated Super Tuesday primaries on March 1, when 11 states will vote and about 880 delegates will be awarded.

Since delegates are awarded proportionally based on vote tallies in congressional districts and some other areas, only blowout victories yield large numbers of delegates. And Mrs. Clinton is better positioned than Mr. Sanders to win big in more delegate-rich districts, like those carved out to ensure minority Democrats in Congress, where she remains popular.

"This doesn’t mean the campaign is over," Bouie was quick to note, adding that "Sanders is still a formidable candidate."

"But the uncertainty that has defined the race since New Hampshire is over for the time being. Clinton still has her advantage with black and Latino voters, and in a Democratic primary, that is dispositive," he concludes.

Sanders' Nevada loss "suggested he isn't delivering on a key ingredient needed for his 'political revolution,'" Jeff Stein wrote at Vox, noting that the 80,000 Democratic caucusgoers who participated on Saturday were only "roughly two-thirds of the total that came out in 2008":

Low turnout in Nevada wasn't an outlier. New Hampshire saw 10 percent fewer voters in 2016 than it did eight years ago. In Iowa, turnout was also down — from 287,000 in 2008 to 171,000 this year. (By contrast, voter numbers are exploding on the Republican side, with records for GOP turnout being crushed in Iowa, New Hampshire, and, from the early results, South Carolina.)

"Sanders rejects the limits of this system," Stein continues. "His 'political revolution' is based on the idea that Democrats could win big with a message that gets a massive number of new lower- and middle-income voters continually engaged in the political process. It's an inspiring vision. But there is little sign that it's actually happening."

Taylor went on to argue that Sanders' performance in Nevada proved his campaign is unable to grow its base of support, particularly with African-American voters:

The problem for Sanders is that he has nowhere to grow. Black voters, who will dominate many of the coming primaries, have not responded to his message. Even black millennials, thought to be good prospects, are breaking in favor of Clinton.

New Republic's Jeet Heer wrote shortly following the close of Saturday's caucuses that Clinton's win in Nevada allowed her to "plausibly argue that Bernie Sanders’s coalition is too narrow—that it is, in particular, too heavily white—to reflect the Democratic Party, which after all is a multi-racial coalition."

Although Heer argued that Clinton "has a clear path to racking up enough delegates to be the prohibitive front-runner," he noted that if Sanders continues to make the same inroads with young Latino voters in upcoming caucus states as he he did in Nevada he still has a shot.

Ultimately, Heer wrote, "unless [Sanders] can make genuine inroads among African-Americans and improve with Latinos above what he’s achieved in Nevada, it’ll be hard to for him to argue that he represents the broader Democratic Party."

Taking a more optimistic view of Sanders' chances, polling guru Nate Silver argued that the silver lining in Sanders' Silver State loss is that "it’s possible that Bernie Sanders will win every state caucus from here on out."

Here’s why I say that. The remaining Democratic states to hold caucuses are: Alaska, Colorado, Hawaii, Idaho, Kansas, Maine, Minnesota, Nebraska, Washington and Wyoming. Other than Hawaii — where I’m not going to pretend we have any earthly idea what’s going to happen — those are a bunch of really white states that otherwise look favorable for Sanders and which he could win even if he slightly trails Clinton nationally.

Still, according to Silver's own FiveThirtyEight.com, Clinton holds a 50-99 percent likelihood of winning some of the most delegate-rich and highly diverse primary states left on the calendar.

Pushing back on the prevailing conventional wisdom in a post-Nevada interview with CBS' John Dickerson on Sunday, Sanders argued that his campaign is confident that in can make inroads with black voters in South Carolina and other upcoming southern states.

"I think when the African-American community understands my record on criminal justice, my record on economics and the agenda we're bringing forth, raising the minimum wage to $15 an hour, dealing with the fact that we have more people in jail, shamefully, than any other country on earth, that I am against the death penalty, Secretary Clinton is not," Sanders said. "I think as people become familiar with my ideas, we are going to do better and better."