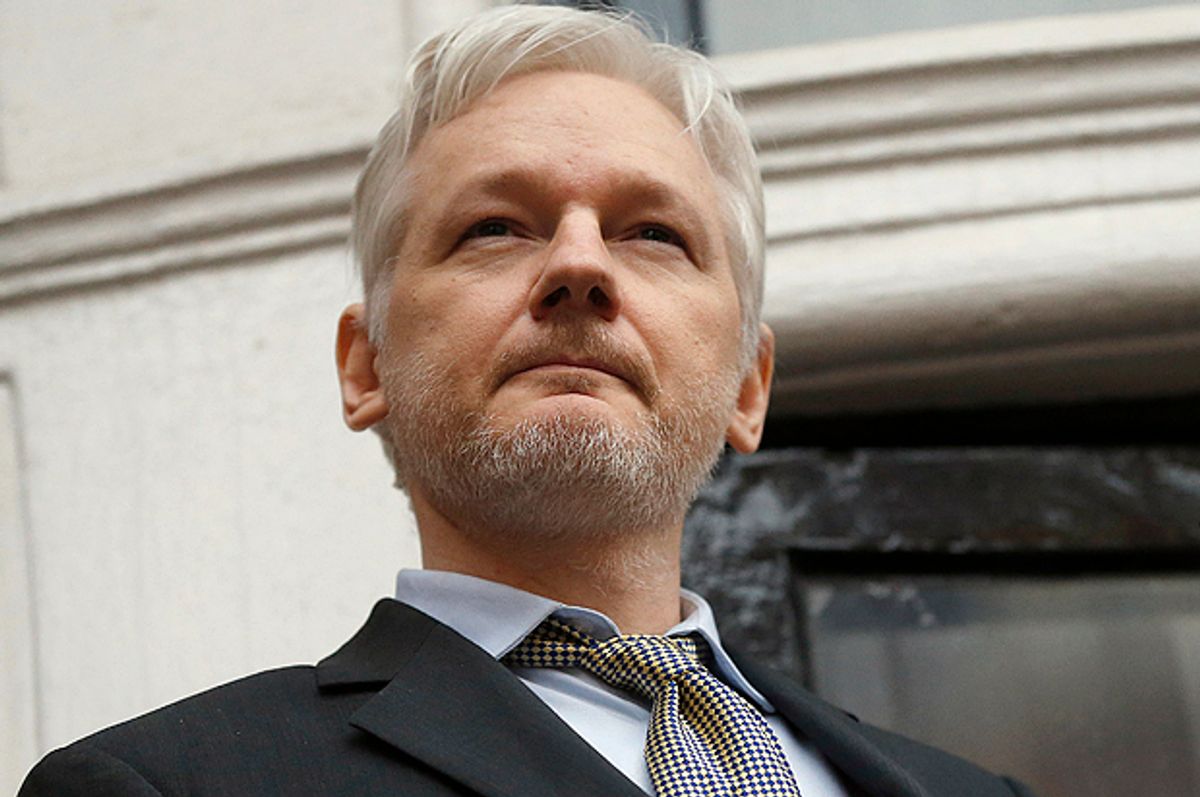 In a momentous ruling in early February, the United Nations announced that "Julian Assange has been arbitrarily detained by Sweden and the United Kingdom."

The founder of whistle-blowing journalism organization WikiLeaks was arrested in London in December 2010, but was never charged with a crime. Fearing politically motivated U.S. extradition, Assange took refuge in Ecuador's embassy in London in August 2012.

In the three-and-a-half years since then, he has remained closed up in the small building, unable to leave. The British government has spent millions of tax dollars monitoring the embassy — 24 hours a day, seven days a week — in order to ensure that Assange does not leave.

The U.N. Working Group on Arbitrary Detention ruled on Feb. 5 that "Assange has been subjected to different forms of deprivation of liberty" and "recognized that Mr. Assange is entitled to his freedom of movement and to compensation."

Condemning "the lack of diligence by the Swedish Prosecutor in its investigations," the U.N. called on Sweden and the U.K. "to assess the situation of Mr. Assange to ensure his safety and physical integrity, to facilitate the exercise of his right to freedom of movement in an expedient manner, and to ensure the full enjoyment of his rights guaranteed by the international norms on detention."

The U.N. had deliberated the issue since it was filed in September 2014.

Last week, in the wake of the ruling, Salon conducted a brief interview with Assange. He only had a few minutes to speak, given his very busy schedule, but addressed several different issues.

Assange said he is very pleased at the decision of the U.N. working group. Before the group released its statement, he had announced that he would have left the embassy and faced the consequences if the U.N. had not ruled in its favor.

"The U.N. is the highest international authority," Assange stressed, noting that the U.K. and Sweden, with the support of the U.S., had tried to derail the U.N.'s ruling for 18 months, but it still succeeded. In these regards, he is hopeful.

He says he is confident that the U.K. and Sweden can be pressured into honoring the U.N.'s ruling, but is still worried that the U.S. government may try to intervene in order to extradite him.

Assange told Salon he is "not sure" whether he will be able to leave the embassy soon.

He also said WikiLeaks is presently  working on several large releases that will be out soon, "involving both individual countries and multiple countries." Assange said he is "excited" about the new materials, but could not say anything else.

Salon asked the WikiLeaks publisher about this thoughts on U.S. politics and the upcoming presidential election.

The Obama administration has used the Espionage Act to target whistle-blowers more than all other presidents combined — "three times more," Assange stressed in the interview.

Assange condemned the Obama administration for "its harsh repression of whistle-blowers and national security journalists."

He pointed out that it was President Obama himself who pushed for the crackdown, not former Attorney General Eric Holder, whom Obama pressured. Assange called Obama "the meanest president" in those regards.

When asked about presidential candidate Bernie Sanders, Assange revealed a fascinating connection: He says his adopted father was an activist with Sanders in Chicago.

Assange says Sanders' policies vis-à-vis Wall Street and out-of-control corporate influence are refreshing, but, emphasizing that he specializes in foreign policy, noted Bernie "has a lot of problems" in foreign policy. Sanders supported the U.S. in  Afghanistan and the NATO wars in Libya and Yugoslavia.

Hillary Clinton, on the other hand, Assange warned would be a "disastrous" president. "She is very hawkish," he stressed, recalling how Clinton led the NATO war that "destroyed Libya."

"Even the Pentagon did not want to be left with another Iraq," Assange said, but Clinton strongly pushed for the war. Today, the country has no functioning federal government, and a variety of extremist groups control large territories. ISIS  has also entered Libya amid the chaos, and is growing, building its largest self-declared "caliphate" outside of Iraq and Syria.

Assange added, "We can expect many more subsequent disasters if Clinton becomes president."

WikiLeaks, widely described as one of the most important journalistic tools to emerge in the past several decades, has provided reporters around the world with documents that expose the crimes and lies of their governments.

Because of WikiLeaks' work in exposing the crimes of the U.S. government in particular, Assange has earned a space high on Washington's wanted list.

Due to the politicization of Assange's case, there has been a lot of misreporting. The group Justice for Assange details the many myths and downright lies frequently spread about his case.

Assange was arrested in London in December 2010, but was never charged with a crime. Swedish authorities allegedly wanted to question him for sexual abuse allegations, but in August 2010, Stockholm's chief prosecutor cleared him of all suspicions, saying she had "made the assessment that the evidence did not disclose any offense of rape." The prosecutor subsequently admitted that "the conduct alleged by [the woman] disclosed no crime at all and that file would be closed."

The woman involved in Assange's case explicitly said that she "did not want to put any charges on JA [Julian Assange] but that the police were keen on grabbing him," the group Justice for Assange points out.

In the police report, the woman said she felt "railroaded by police and others around her" and stressed that she "did not want to accuse JA for anything."

She added, "It was the police who made up the charges."