"He was your average Joe": The police and the media coddle another white killer 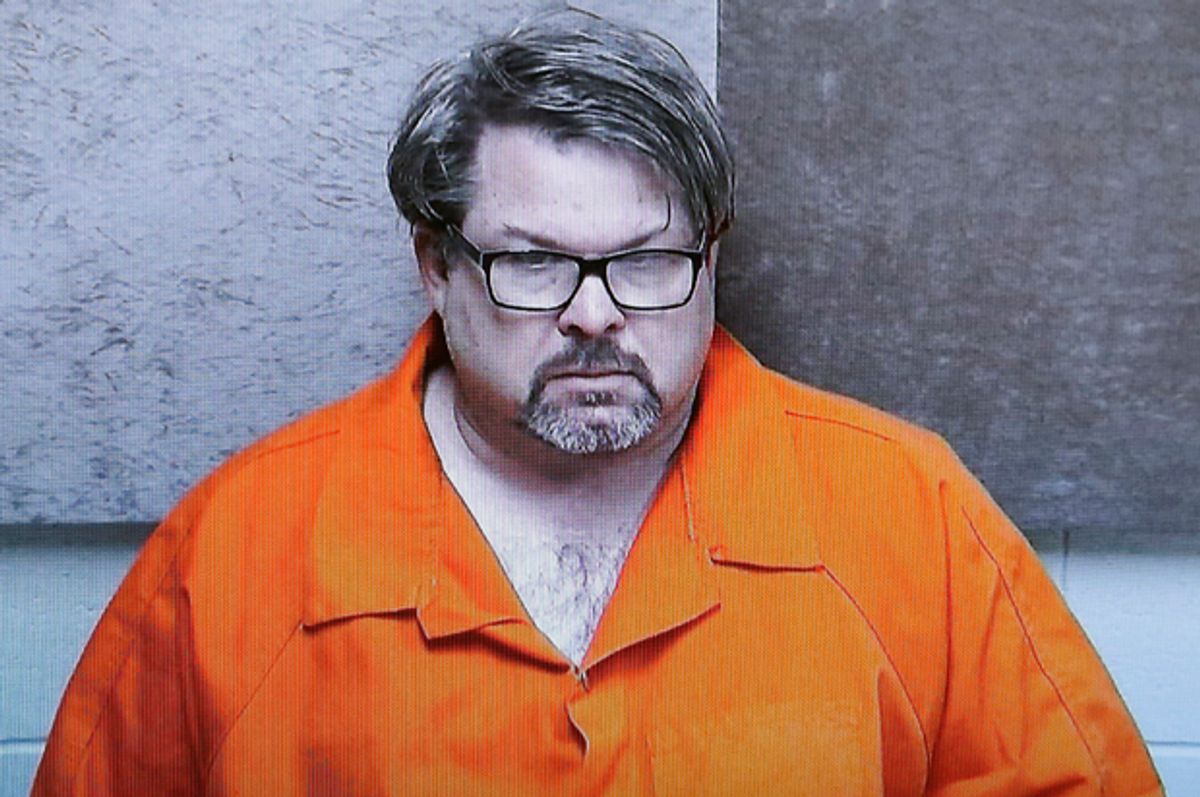 On Saturday, a 45-year-old white man named Jason Brian Dalton allegedly went on a shooting spree in Kalamazoo, Michigan. The Uber driver has been charged with six counts of murder and two counts of assault with intent to commit murder. In too many ways, this is the new normal in America.

CNN framed the reactions to the Kalamazoo murder spree in the following way:

"This is your worst nightmare," Kalamazoo County Undersheriff Paul Matyas told CNN affiliate WOOD-TV. "When you have somebody just driving around randomly killing people."

"We just can't figure out the motive," said Hadley. "There's nothing that gives us any indication as to why he would do this or what would have triggered this. The victims did not know him, he did not know the victims." ...

"For all intents and purposes, he was your average Joe. This was random," said Hadley.

Getting appeared to struggle at times for the right words, if there were any, at Sunday's press conference.

"There is this sense of loss, anger, (and) fear," he said. "On top of that, how do you tell the families of these victims that they were not targeted for any other reason than they were a target?"

Getting said he was confident that Dalton acted alone, and that there is no connection to terrorism.

There is a standard script used by the American corporate news media—and among the public and many elites—to discuss tragedies of this type. It is familiar. We know its vocabulary and narrative.

The white man who commits an act of mass gun violence was “disturbed” or “mentally ill.” He was a “lone wolf.” Alternatively, he is a “family” man who was living “the American Dream.” Politicians and the corporate news media caution the American public to “wait for all the facts” before arriving at any conclusions. Republicans and the right-wing news entertainment complex demand that “we” should not “politicize” gun violence. On cue, the gun lobby and its supplicants recite tired and untrue mantras such as “a good guy with a gun can stop a bad guy with a gun” and “guns don’t kill people, people kill people.”

And of course, one of the most problematic and dangerous parts of the script that is used to discuss mass shootings by white men in America is how those happenings are all so “unpredictable” and “random.” Gun violence is treated as an inevitability, something akin to a storm or “act of God.” In reality, it is the result of systematic failings of public policy, the overwhelming power of the gun lobby, and an inability on the part of the American people to hold their elected leaders accountable to the people’s will.

(A new and even more perverse “logic” has also been summoned on social media and elsewhere to discuss the Kalamazoo gun rampage. Apparently, Jason Brian Dalton is not a “mass shooter” because his killing of six people and wounding of two others took place not in one isolated event, but rather over several hours.)

Those who deviate from the boundaries of this script are often met with outrage and blind anger. Ultimately, to discuss the relationship between guns, white men, masculinity and mass violence in America is verboten. This is the lethal output of white privilege and the white racial frame in combination with one another.

There are voices that deviate from the script, those of us who dare to point out troubling questions about the nature of fairness and justice along the color line.

For example, white men with guns who kill multiple people are somehow miraculously taken into custody by police unharmed, yet black and brown people who do not have weapons, and have committed no crime, are routinely killed by heavily militarized police who are in “fear for their lives.” Likewise, white men like Cliven Bundy (and others) can point live firearms at America’s police and other law enforcement agents with relative impunity. A person of color (or someone marked as a “Muslim”) doing the same thing would be met with extreme and lethal force.

What these dissenting voices are pointing out, in their own 21st century version of “parrhesia,” is that the relationship between guns, masculinity, whiteness, democracy and notions of “freedom” constitutes a very particular and specific form of privilege that is usually denied to other groups in the United States.

To be “white” in America is the ultimate freedom to be an individual. Consequently, when white men commit horrible acts of mass gun violence there is no public demand for group accountability or introspective thought about what is “pathological” about “white culture”; white men as a group are most certainly not held responsible or stigmatized for mass shootings; there will be no discussions in the corporate news media about “white crime.”

Saturday’s act of mass murder in Kalamazoo, Michigan, is also an opportunity to highlight how the narrative of “random” gun violence can itself be a reflection of white (male) privilege.

To that end, I offer a question. Can an American who happens to be Muslim commit an act of random gun violence that kills multiple people? As a matter of empirical fact, the answer is clearly “yes.” A person from any ethnic or racial background can commit an act of violence, one that seemingly has no motive other than to inflict harm, and where the victims do not know one another.

However, the news media and America’s other opinion leaders would treat the same event as an inherently political act of terrorism. Where the alleged mass killing of six people in Kalamazoo by Jason Brian Dalton has been greeted with relative silence by the corporate news media and politicians, the same event by a “Muslim” or someone else marked as the Other would be a source of mass panic and fear.

The concept of “race” has been described by social scientists, historians and philosophers as a way of marking identities in such a manner as to answer pressing political concerns, respond to socio-political anxieties, or to demarcate who has power and what groups and individuals do not.

In the post 9/11 dystopian neoliberal nightmare version of the United States of America, to be perceived as “Muslim” is to inhabit a body and cultural identity that is marked as inseparable from “terrorism” until 1) proven otherwise and 2) to the satisfaction of the White Gaze. This irrational bigotry does many different types of political and social work. On one hand, it is a formula for success used by proto-fascist, racially resentful nativists in the Republican Party and the broader right-wing political-entertainment machine. The notion of Muslims as “terrorists” also blunts and obscures any significant public discussion about (and interventions against) mass gun violence and its connections to toxic and aggrieved white masculinity.

The inability to have these discussions is one more example, among many, of how racism hurts white people. The mass killings in Kalamazoo, Michigan, were the 42nd such event in the United States during 2016. Most victims of gun violence and other crimes are intra-racial. White men are, with several notable exceptions such as the Chattanooga massacre, largely killing other white people in America’s mass shootings. Since Sept. 11, 2001, right-wing domestic terrorists have killed more Americans than “Muslim terrorists.” The right-wing media and Republican political elites have worked very hard to suppress and deflect any discussion of that fact. White men are approximately 30 percent of the American population but are responsible for approximately 64 percent of mass shootings. Yet it is considered impolitic, or an act of “reverse racism,” to publicly discuss and seek explanations for that phenomenon.

Gun violence is a public health crisis in the United States. Mass shootings by (mostly) white men are an acute example of this public sickness. The American people and their leaders lack the will to confront those dual problems because to do so would involve asking very difficult questions--the answers to which many of us are extremely afraid.