Hillary's about to get away with a stiff-arm: She needs to fundamentally rethink her policies -- and we need to demand it

This was the year to demand more than someone marginally better than the GOP, and to push to build on Obama years 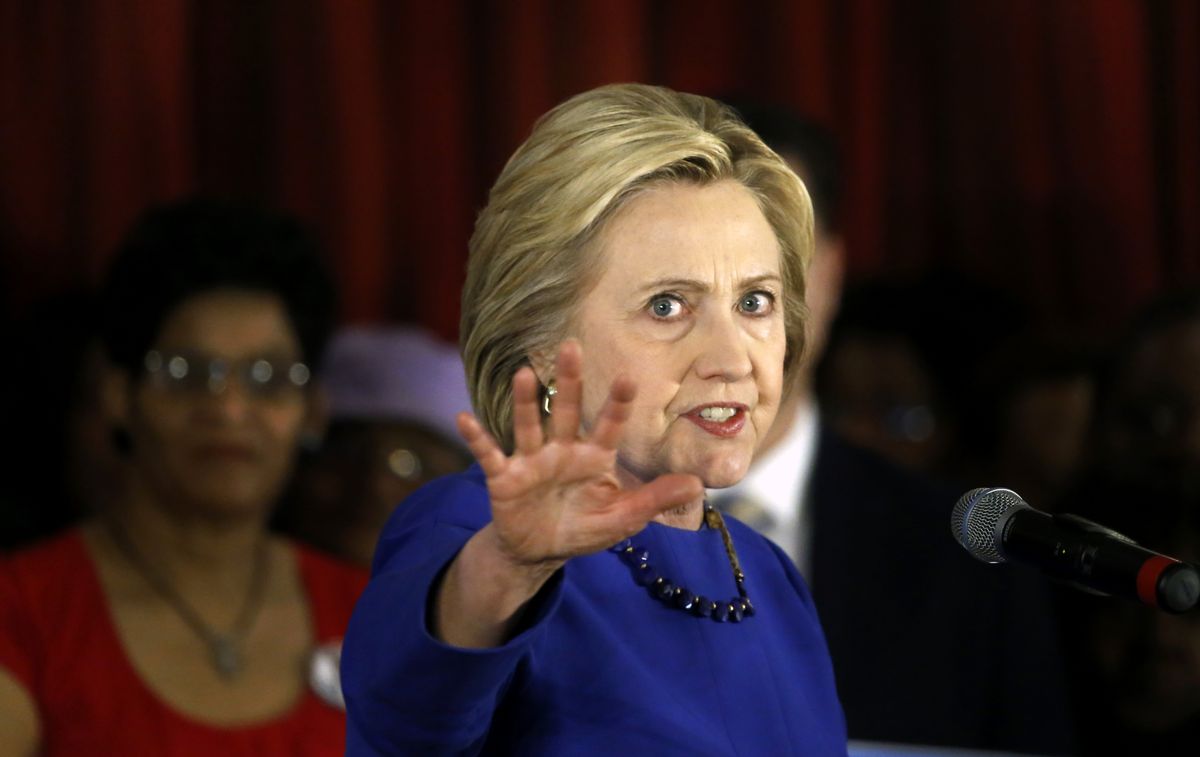 Both Bernie Sanders and Hillary Clinton did well in the NBC/Telemundo Town Hall [transcript] last week, as most commentators seemed to agree. It was not a gamechanger in the primary, despite coming at a crucial time. And yet, there was a moment in Clinton's performance that seemed to crystalize everything she is struggling with—and arguably, everything the Democratic Party is struggling with as well.  One moment, the crowd broke out into applause as Clinton said, “Maybe it's that Sen. Sanders wasn't really a Democrat until he decided to run for president.” But a sudden wave of boos met her after her next line, “He doesn't even know what the, you know, last two Democratic presidents did,” and the booing continued as she protested their response, “Well, it's true. It's true. You know it's true. I mean, it happens to be true.”

The sudden shift in mood from the audience wasn't just because Clinton's argument was a non sequitur, it was elicited by a cheap shot, but it reflected something deeper that pollster Stan Greenberg has been arguing for some time, based on his polling data—that the Obama coalition  (Greenberg, among others, calls it  “the rising American electorate”) sees Obama's accomplishments as a floor to build on, and they share Sanders aspirations to push even farther. In trying to portray Sanders as other, as an outside interloper, she was actually attacking the very voters she was trying to woo.

That moment—and Clinton's struggles more broadly—also reflect another deeper reality: That Bernie Sanders is right about democratic socialism, it produces better lives for people, and that the Third Way/DLC/New Democrat tradition that Clinton comes out of does not—although it's certainly better than what the conservatives are pushing.

By its very nature, political campaign coverage deals with politics as theater. But what we saw in the Nevada Town Hall was ultimately shaped by inescapable reality, slowly over many years, in people's lives, but also suddenly over the course of a few weeks and days in the shifting dynamics of the political campaign. Whichever candidate prevails in the end, the Democratic Party will only succeed if it comes to grips with these underlying realities, as a necessary pre-condition to winning the war of political theater this year.

It's instructive to look at how the moment of Clinton's booing came about.  It began with a question being posed by Jose Diaz-Balart, giving voice to a Sanders criticism that neither Clinton nor any of her supporters have been able to answer, except by changing the subject, or shifting the frame of reference—as Clinton, once again, attempted to do:

Should you be held accountable for your husband's…?

CLINTON: Well, he was the president who created 23 million jobs, who raised incomes for every group in America, not just those at the top. In fact, African-American families, Latino families had an even higher than average increase in income, created some great economic development programs like you know the Empowerment Zones and the New Market Tax Credits.

Clinton is deflecting here, in a classic political move. Rather than trying to defend the indefensible, she shifts to talking about the positives—some of which (the job creation and rising incomes) are true, while others are much less certain (Empowerment Zones, for example). However, what's being obscured here is not just a point of political embarrassment for Secretary Clinton, it's a fundamental lived reality that's affected tens of millions of American families over that past 20-30 years. The place-based, supply-side logic of enterprise zones (Clinton's “Empowerment Zones” were just one example) was a response to widespread de-industrialization, which NAFTA made significantly worse. So, to the extent that the latter were successful (assessments are mixed), they are swimming against the stream of a broader adversity that Clinton was also responsible for. Similarly, “welfare reform” looked reasonably successful in the short run, paired with expansions in the Earned Income Tax Credit, but when hard times have hit, and welfare has been needed most, that's when its failure has became strikingly apparent.

All this can be ignored by the bipartisan political establishment, who are far removed from the lived reality of most Americans, but it's profoundly shaped our national reality nonetheless. So, though she didn't realize it, Clinton was skating on thin ice when she glossed over how damaging her husband's policies had been. She then picked up speed heading into her main political move: identifying herself with Obama, and portraying Sanders as an outsider, an “other,” akin to the Republicans:

[CLINTON] So you know, I know that Sen. Sanders has also attacked President Obama. He's called him weak. He's called him disappointing. He tried to get somebody to run against him in the 2012 election in the primary.

And you know I just don't know where all this comes from because maybe it's that Sen. Sanders wasn't really a Democrat until he decided to run for president.

He doesn't even know what the, you know, last two Democratic presidents did...

CLINTON: And I'm -- you know, well, it's true. It's true. You know it's true. I mean, it happens to be true. And I've go to tell you, I look at our last two Democratic presidents, were they perfect? No, no person is.

But I'll tell you what, I would take the two of them over any Republican any time, anywhere.

To understand what went wrong for Clinton here, we need to recognize it was not just a momentary glitch, but a window into a deep chasm that she and entire Democratic Party leadership class have been trying to skate over.  For context, we turn to Stan Greenberg, and what his polling reveals, as described in a Huffington Post story when his latest book, "America Ascendant: A Revolutionary Nation's Path to Addressing Its Deepest Problems and Leading the 21st Century" was released in late October:

“The problem the president has had is that he's not tried to educate the country on how deep the downside is,” Greenberg told HuffPost. “He was trying to tell the country that we're on an upward path without being honest, leveling with them about how big a price we have [to pay] in the short term and how much government has to do in order to get us onto a different path.”

This is a highly respected pollster with long ties to the New Democrats like Hillary Clinton, speaking months before the reality of Sanders' challenge became apparent to most. And his message is essentially that Sanders is right, and Clinton is mistaken.  It may be easier for a data-driven pollster like Greenberg to evolve than it is for a politician like Clinton, but it very much seems that he's modeling a different path that she would be very wise to take.

In sharp contrast to Clinton's evasiveness, Sanders had no trouble defending what he stands for. When Jose Diaz-Balart tried to red-bait him, Sanders handled it effortlessly, as if he could do it in his sleep:

DIAZ-BALART: You're a democratic socialist. When -- when some Latinos hear those words, they think Venezuela and Cuba, Chavez and the Castro brothers, 57 years of dictatorship.

Talk to the people who escaped those regimes today and hear you use those words and wonder exactly...

DIAZ-BALART: -- what you have in mind.

SANDERS: Sure. When I talk about democratic socialism, you know what I'm talking about? Social Security, one of the most popular and important programs in this country, developed by FDR to give dignity and security to seniors. And it has been enormously successful at reducing poverty among seniors.

When I talk about democratic socialism, I am talking about Medicare, a single payer health care system for the elderly. And in my view, we should expand that concept to all people. I believe that everybody in this country should be entitled to health care as a right. And the most effective way to do it is through a Medicare for All single payer program.

And you know what goes on in those countries?

All of the kids who have the ability and desire go to college.

And you know how much it costs?

And then Sanders did something more—he directly connected what he's for with what he's against:

The bottom line is, when I talk about democratic socialism, what I mean is moving away from where we are right now. As a member of the Senate, let me break the bad news to all of you. We have a Congress right now which is dominated by Wall Street and big money interests....

That's not their worry. Their worry is getting campaign contributions from very, very wealthy people and providing tax breaks for those who don't need it.

Hillary Clinton can't make Bernie Sanders' argument. Not as long as she's too closely linked to the very forces Sanders has squared off against. But she's got to do seriously better than she's doing now. She's got to start reaching for a deeper reorientation of what she's all about. That's the over-rising sense of of Greenberg's argument, and it was supported that same day by a set of head-to-head polls released by  Quinnipiac University. According to its press release:

American voters back Sen. Bernie Sanders of Vermont over Republican candidates by margins of 4 to 10 percentage points in head to head presidential matchups, according to a Quinnipiac University National poll released today. The closest Republican contender is Ohio Gov. John Kasich who trails Sanders 45 - 41 percent.

I'm not saying that Sanders will win, or that Clinton is doomed to lose. But those numbers need to be taken seriously, and Clinton needs to consider a much more fundamental rethinking of what she is about. So does the rest of the Democratic establishment. For more than a decade now, Democrats have prided themselves on being members of the “reality-based community.”  Now it's crunch time. Now it's time to prove it.