The "Girls" wedding from hell: Is Lena Dunham torturing her characters or us?

Dunham's season 5 premiere is laugh-out-loud funny, but nothing about Marnie and Desi's wedding makes sense 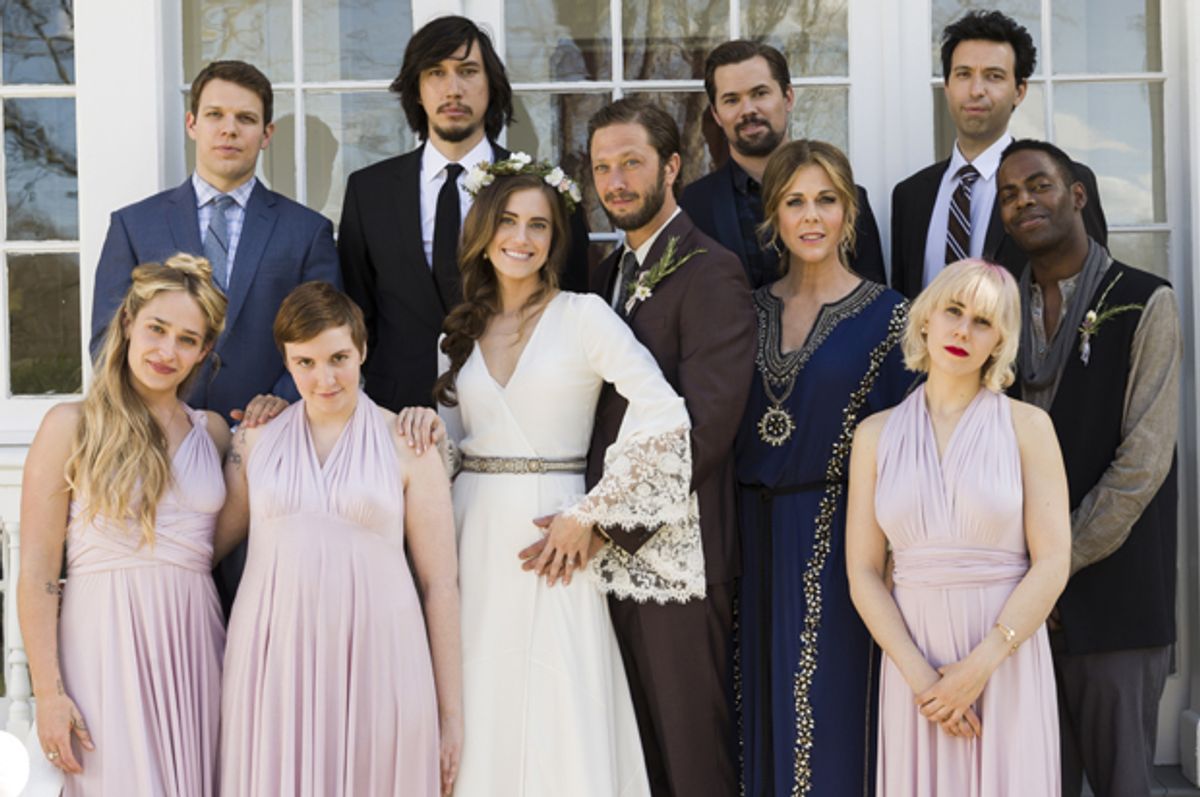 Last night’s season five premiere of “Girls” brought us to yet another quick-trigger wedding in the show’s history, after the season-one finale “She Did,” in which Jessa (Jemima Kirke) married Thomas-John (Chris O’Dowd) after having known him for about a week. Marnie (Allison Williams) and Desi (Ebon Moss-Bachrach) have known each other for a bit longer—ever since Desi started cheating on his girlfriend at the time to sleep with his musical collaborator, Marnie—but their wedding in last night’s episode is still absurdly sudden, following an even more sudden engagement which occurred just a few months into their relationship.

Desi and Marnie are a combustible, dramatic couple, the pair that brought to “Girls” both a screaming fight about German guitar pedals and the now-infamous analingus scene from early in their affair. So naturally, their wedding is fertile ground for a lot of dysfunction. In “The Wedding,” Desi’s revealed to have broken off several prior engagements, while Marnie’s so saturated in superficial bridal ridiculousness that she manipulates Shoshanna (Zosia Mamet), fires the hairdresser, fights with her mother, and needles Hannah (Lena Dunham) for not trying hard enough to look pretty. Meanwhile, Jessa and Adam (Adam Driver) sneak away from their respectively cloying single-sex dressing rooms to make out a tiny bit in a picturesque upstate New York backyard. And Ray (Alex Karpovsky), still hung up on Marnie, ends up being the guy who follows Desi into the freshwater lake—while fully clothed in his suit—to pep talk the guy into marrying the girl that Ray thinks he loves.

It’s all deliciously twisted. But as is always the case with “Girls,” especially following its first two seasons, the drama all feels a bit empty. The show so prioritizes the suffering of its characters—for the presumed amusement of the audience—that it can never quite bring itself to let the characters mature. “Girls” has, in fact, an incredibly cynical view of human nature—one where people who are very similar to the actors and writers who portray them just run around in circles, making the same mistakes in slightly broader strokes over and over again. All of “Girls”’ characters are too self-involved to really feel anything for anyone else, and that’s because as creations, they don’t have much life outside of the show’s requirements. It’s more useful for the show for Marnie to enmesh herself in a very poorly thought-out wedding than it is for Marnie to have learned from Jessa’s prior mistake; in the former scenario, at least the show has something to do.

This is highlighted to me by the creative decision to have the entire regular cast of “Girls” play a role in Desi and Marnie’s wedding—Hannah, Shoshanna, and Jessa as Marnie’s three bridesmaids, while Ray and Adam are part of Desi’s entourage. As far as the show requires, it makes perfect sense. But based on what we know of the characters, and their fraught connections to each other, it makes no sense whatsoever. Marnie and Hannah quarrel as much as they get along; Marnie and Jessa have antagonized each other for years, including last season, when Jessa told Marnie she hated her music; and though it’s entirely likely that Marnie would rub in her superiority to semi-romantic rival Shoshanna, it’s hard to imagine that Shoshanna would fly in all the way from Tokyo to attend the wedding of the girl who she once pounced on top of and screamed, “I hate you!”

But of course, “Girls” has forgotten about all of this, and assumes that you will have forgotten it too. Because the point of the show is not that the characters learn things or even do things, but instead that they are as self-absorbed and privileged and as infuriating as possible, listlessly going through the motions of pretending to be grown-ups. It’s undeniably compelling, in that mounting horror and/or disgust is compelling. To its credit, “The Wedding” features a directorial lens that is even more drily amused by its characters’ machinations than ever; writer-director Dunham is more clear than ever how ridiculous and pathetic these characters are, even if she can’t bring herself to end their stories yet. (As was announced earlier this year, “Girls”’ final season will be its sixth.) The result is an episode that is funnier, in a laugh-out-loud way, than almost every other episode of this show.

The downside to this apparent newfound wisdom is that “Girls” itself now knows how disposable its own plotting is, and is struggling to discover what all this ceaseless, fruitless discovery of self actually means. What remains are snapshots of a show that doesn’t quite know why it matters, with Hannah Horvath standing at the top of the porch stairs and experiencing a frisson of excitement and fear for taking the next step forward—under the strange delusion that a step forward, in this show, leads anywhere at all.