The scariest thing about Trump's primary dominance: The GOP still doesn't understand the monster it created

In many ways, Trump's rise to GOP superstardom was inevitable. Yet establishment Republicans still don't get it 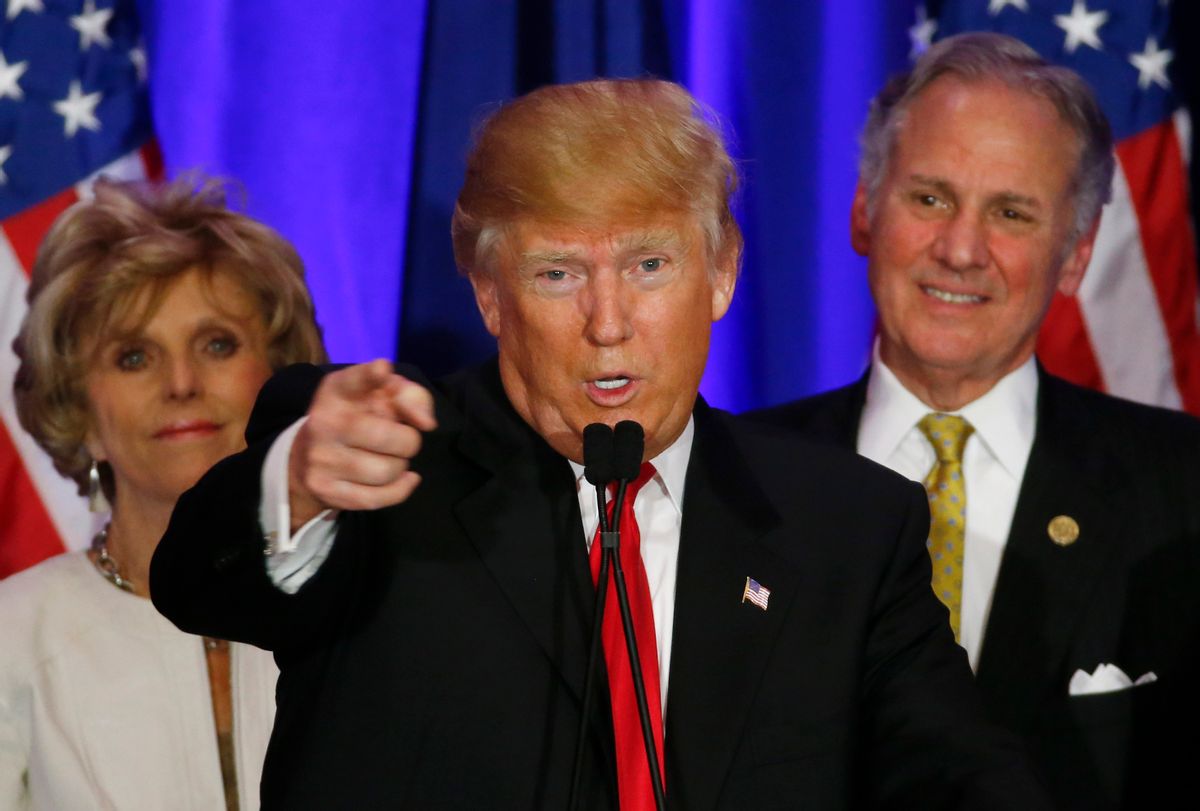 The big showdown in South Carolina is over and it came down pretty much as everyone expected. Donald Trump came in first with 32.5 percent, Rubio and Cruz nearly tied for second with Rubio ever so lightly edging Cruz with 22.5 percent to Cruz's 22.3. The bottom three, Bush, Kasich and Carson all landed with 7-ish points each. The big news was that Jeb Bush dropped out of the race within minutes of the results being called.

So, what does this all mean? Well, nothing new really. Trump declared victory with an odd admission of what really turns him on about running for president, when he said, "It's tough, it’s nasty, it’s mean, it’s vicious.... it’s beautiful. When you win, it’s beautiful.” He is very, very good at being mean, nasty and vicious. Nobody can say that isn't working for him.

The pundits are all wondering what happens next, with two rivals still fighting for second place and a couple of others hanging on despite the fact that they are not actually getting anywhere. According to the New York Times, members of the establishment are starting to panic:

Henry Barbour, a Republican National Committee member from Mississippi, sounded a note of alarm about Republicans continuing to wait to see how the race plays out.

“After Trump has won in New Hampshire and South Carolina, Republicans are crazy and about to blow the White House if we don’t rally to stop him,” he said. “It’s certainly time that we have to consolidate the race.”

He predicted that Mr. Trump’s nomination would not only cost Republicans the White House but also hurt the party’s chances of keeping its majority in the Senate.

If the idea is to stop Trump, then somebody is going to have to drop out and drop out quickly. The delegate scheme that was hatched to prevent a re-run of Romney's long slog against such luminaries as Newt Gingrich and Rick Santorum has turned into a formula for a victory for Donald Trump. Recall this New York Times article from last fall:

In the starkest sign of how unsettled the situation is, what once seemed unthinkable — that Mr. Trump could win the Republican nomination — is being treated by many within the Republican establishment as a serious possibility. And one reason his candidacy seems strong is a change by the party in hopes of ending the process earlier: making it possible for states to hold contests in which the winner receives all the delegates, rather than a share based on the vote, starting March 15, two weeks earlier than in the last cycle.

If Mr. Trump draws one-third of the Republican primary vote, as recent polls suggest he will, that could be enough to win in a crowded field. After March 15, he could begin amassing all the delegates in a given state even if he carried it with only a third of the vote. And the later it gets, the harder it becomes for a lead in delegates to be overcome, with fewer state contests remaining in which trailing candidates can attempt comebacks.

They wanted to end it earlier in order to prevent the nominee from being forced so far to the right that he will be hamstrung in the general election as Mitt Romney was. That calculation is no longer operative. At this point they'll be happy to elect a nominee who won't cause what's left of the Republican Party to implode completely.

The assumption among the establishment types is that if only Cruz, Kasich and Carson would get out of the way, all those voters would go to Rubio and they could finally knock out Trump and carry on with the plan. Unfortunately, even if they were able to finally get Rubio a free lane in which to run, there's no guarantee that he would be the beneficiary of all those freed up votes.  That's because Trump draws from every demographic. As Ronald Brownstein in the Atlantic pointed out:

On most fronts, the big story in South Carolina was the breadth of Trump’s appeal. Repeating the New Hampshire pattern, Trump in South Carolina ran slightly better among men (36 percent) than women (29 percent). He carried 29 percent of voters who identified as very conservative; 35 percent of somewhat conservative voters; and 34 percent of moderates. That also followed the New Hampshire precedent of little ideological variation in Trump’s support.

In South Carolina, Trump won 33 percent of independents and 32 percent of self-identified Republicans; in New Hampshire he had carried exactly 36 percent of both groups. Trump ran somewhat better last night among voters older than 45 (35 percent) than those younger (26 percent). In New Hampshire, by contrast, Trump’s support varied little by age, though he also performed somewhat better with older voters in Iowa.

(Trump also won a plurality of evangelical voters who turned out in huge numbers to vote. The exit polls don't delve down quite so deeply, but my suspicion remains that he draws from the "prosperity theology" disco-evangelical crowd, which is a lot less culturally conservative than the more traditional evangelicals who went, as expected, for Ted Cruz.)

Indeed, according to this article in the New York Times, even some Jeb Bush donors are considering joining the Trump bandwagon -- or at least letting it carry on without any obstruction from them:

Fred Zeidman, a major Republican donor and longtime Bush family friend who had backed Mr. Bush, said he planned to take a breath and see how things played out. The same was true for Woody Johnson, the owner of the Jets football team, who was Mr. Bush’s national finance chairman. An aide to Mr. Johnson pointed out that he had knocked on doors in early states for Mr. Bush and invested lots of time to help him, and he was not ready to shift allegiances so soon.

Mr. Johnson, who has long been a friend of Mr. Trump, has nonetheless found himself used as an object lesson over the last week by Mr. Trump, who named him at rallies as an example of special-interest donors who supported candidates like Mr. Bush. And in conversations on Sunday morning, there was evidence of interest among some of Mr. Bush’s former donors about possibly backing Mr. Trump.

So what this all adds up to is that the GOP establishment is just as flummoxed about what to do with the Trump phenomenon as before. And this should be no surprise considering that the only thing that changed was a guy who was in 4th or 5th place finally realized he was dead in the water and dropped out.

Still, there is another pundit take-away from the South Carolina results that might be a bit more troubling down the road. One of the more astonishing aspects of Trump's win in that gothic southern state is that he proved once again that it doesn't matter what he says, as long as he delivers his lines with that big swinging attitude of his. As Igor Bobic and Ryan Grim point out in a piece at the Huffington Post, over the course of the South Carolina primary campaign Trump summarily executed a number of GOP sacred cows:

Trump declared that former President George W. Bush had lied about weapons of mass destruction to march the country to war; blamed Bush for the 9/11 attacks, arguing that he ignored intelligence community warnings; defended Planned Parenthood; boasted that he was the only Republican who would not cut Social Security or Medicare; said he approved of the individual mandate in Obamacare; and promised to slap onerous tariffs on companies who outsource jobs.

He also vowed to stay neutral in disputes between Israel and Palestine, which is the equivalent of carpet bombing and entire herd of sacred cows.

Pundits on TV and elsewhere were quick to interpret the fact that Trump won so decisively in such a traditional state to mean that all those Republicans were drawn to him because they agree with him on those issues.  They seem to think this might signal that the GOP is becoming a mainstream populist party.

I would argue the opposite is true. They voted for him in spite of his apostasy on all those issues. Indeed, it's pretty obvious they were willing to rationalize all of it because they believe so strenuously in all the other issues on which he running. They are ecstatic over his anti-"political correctness" campaign to deport millions of undocumented immigrants and their American children and ban 1.6 billion Muslims from entering the country, while putting the ones who are already here under surveillance. These voters cheer wildly for his enthusiastic endorsement of torture, his promise to kill the families of terrorist suspects and his pantomimes of summary executions of soldiers accused of desertion.

His puerile insults and schoolyard bullying are seen as signs of strength. His profane language is appreciated for its gritty machismo. He treats the press with total contempt, and the voters love it.

Over and over again, when asked to explain what they like about him, Trump supporters exclaim, "He knows what I'm thinking!" And what these people are thinking is that he's making it safe for them to be "politically incorrect" again, giving sanction to publicly express their resentment toward people who don't look and act like them. There are certainly reasons why these voters feel that way, but they are not due to populist anger toward the 1 percent. After all, the man they are cheering on with such enthusiasm is a man who spends half his time on the stump bragging about his vast wealth and explaining that it's perfectly normal for businessmen like himself to bribe and cajole politicians to do his bidding. He's never promised to change that system, not once. And his fans have never once asked him to.