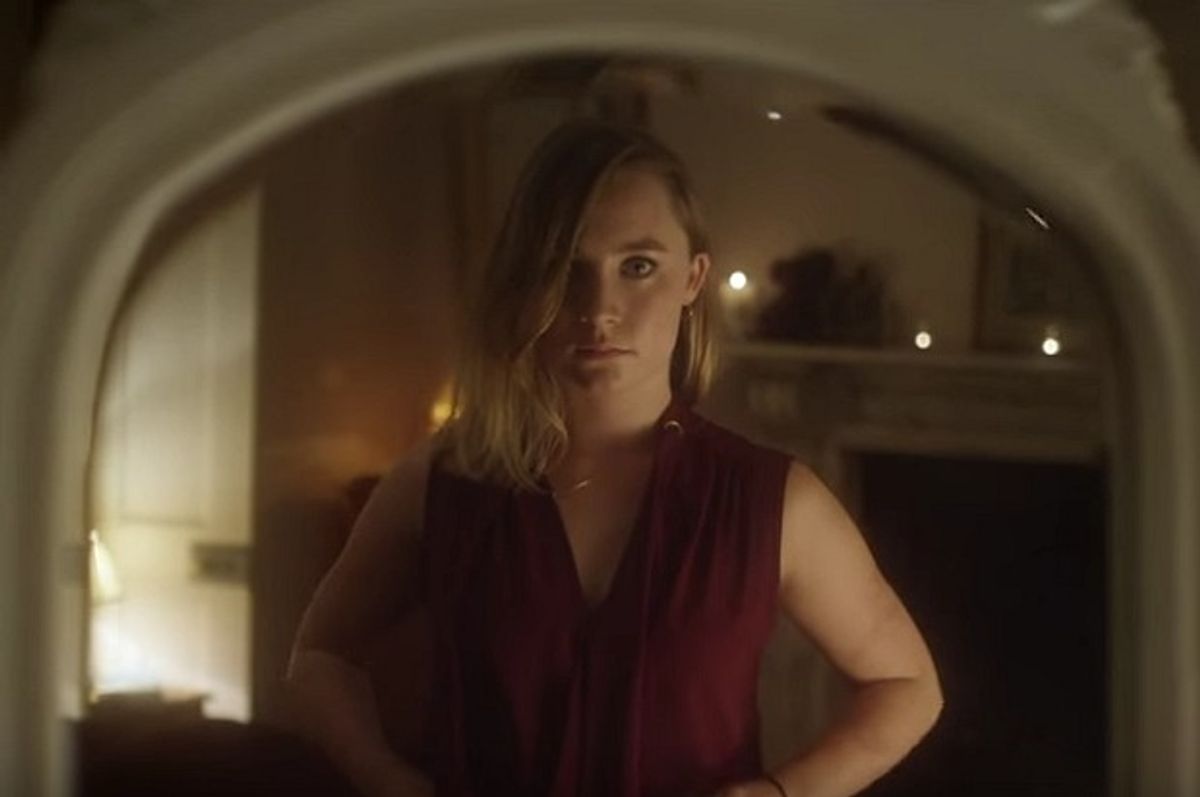 It’s been 25 years since Camille Paglia proclaimed that women stay in abusive relationships because “the sex is hot,” and precious little in popular culture has compellingly suggested otherwise.

Released on Valentine’s Day, singer-songwriter Hozier's video for "Cherry Wine" stars Academy Award nominee Saoirse Ronan (whom I kept hoping would go all "Hanna" on her partner) as a woman in a violently abusive relationship. The video itself, however, most closely resembles a Lindt chocolate commercial, replete with soft low-key lighting, exposed wood floors, and a plushy living room couch. Throughout the film narrative, a heart motif surfaces in the form of a golden pendant and wicker wall hanging; at the end, we are told the video is part of the #FaceUpToDomesticViolence campaign, with proceeds from purchasing the single going to domestic violence charity organizations.

Aside from Ronan's gradually revealed eye contusions and what might be some faint bruising on the forearm (it’s hard to tell for lack of illumination) the video avidly steers clear of any typical signs that something might be wrong. Romanticizing trauma in the name of “facing up to domestic violence,” the video ultimately leaves one wondering, "facing up for what?"

Compared to the overt glamorization of abuse in Rihanna and Eminem’s 2010 “Love the Way You Lie”—a video that may have inspired many to steal a bottle of Stoli and get it on in a summer wheat field—Hozier’s PSA initially seems like a shift from the myth of the wife-beater in a wife-beater (the term itself a sartorial nod to an intrinsically classist nomenclature). If it's really a revelation that flannel-clad beardos can also punch their partners in the face, then, yes, “Cherry Wine” is “powerful”. And perhaps (sadly) this will prove a revelation to many, so spoon-fed are we by expired tropes of tattooed bench-pressers battering women.

In that respect, and that alone, it’s great that the guy depicted is not a clichéd abuser — he sports a tidy beard and wouldn’t stand out at a poetry reading. He doesn’t look like he just slammed eight scoops of protein shake or a six pack of Coors. He’s white and wrapped in a Cuomo Cardigan that a million hip white guys are wearing right now. And his behavior throughout the entire narrative is unremittingly tender—horrifyingly so when tacitly acknowledging his partner’s blackened eye. These aren't typical depictions of domestic abuse. But look past these soulful gazes and gentle cheek caresses, and beneath this shoe-gaze image of a bad boyfriend lurks a dangerous sentimentality.

It is dangerous to suggest that when an abusive partner leads to a black eye camouflaged with makeup, that one need only “face up” to one’s face in a three-panel mirror and the problem will solve itself. It is dangerous to once again suggest (as did Paglia decades ago) that a violent man is necessarily a more sexually virile one, the kind who will push you against a wall (or doorway or sofa) and ravish you like the Harlequin hipster he was born to be. It is dangerous because plenty of women (and men) would love to be pushed against a wall and ravished, but that is very, very different than being struck across the face. To imply the two intrinsically go together is not a far cry from Eminem, in the "Love the Way You Lie" video, threatening to tie his counterpart “to the bed and set this house on fire”—the same bed that a few scenes earlier hosted an array of steamy relations between Megan Fox's character and the actor playing her lover, Dominic Monaghan.

Of course, it is equally unfair to suggest that it is easy to leave, or to conclude that a woman who stays is unintelligent, or implicitly consenting to her partner’s behavior. In “Sin by Silence,” a 2009 documentary about abuse survivors incarcerated after defending themselves, the late Dr. Elizabeth Leonard shares the harrowing statistic that a battered woman is 75 percent more at risk of being killed in the two years after she leaves. Within the flirty wine-and-kiss exchanges between Ronan and her partner, she may seem to earnestly reciprocate, but it's important to point out that once the cycle starts, there is zero real romance, and women who are in abusive situations often walk on eggshells as to not upset their batterers. They may put on a show, but the fear that they are navigating around the clock is real. Many batterers, unsurprisingly, tend to be soft and kind after an attack, expecting their victims to be a fountain of forgiveness. “If you are not,” one survivor put it to me, “expect life to get a lot more difficult.”

The lyrics to “Cherry Wine” (from the incongruous vantage point of a man being abused by a woman) further reflect how complicated the choice might be to stay or to leave, and how some in abusive relationships feel genuinely infatuated with their abusers. “Open hand or closed fist would be fine,” goes the plaintive refrain. “The blood is rare and sweet as cherry wine.” Later Hozier croons, “…I want it, it’s a crime.” Vampiric rationale aside, these lines, and the visual narrative they convolutedly accompany, ultimately fail in their imperative to confront the issue, especially with respect to the fact that it is suggested that Ronan’s character is a mother. Legally in many states, the DCFS can open a case against a woman for “neglect” if a mother stays and her child remains a witness to abuse (maybe this isn’t the case in the Hozier-hood, but most of his audience is across the pond). With at least two pans across a framed portrait of Ronan and a similarly blue-eyed wee one, the video glides over the repercussions of staying for the child.

Battering isn’t consensual sexual aggression; it isn’t Lena Dunham in “Tiny Furniture” commanding “Pull my hair” to a coworker during a rooftop quickie; it isn’t Lana Del Rey imploring “give me all of that ultraviolence” while veiled in retro bridal lace (though that line has trouble of its own). As Daisey LaFarge explains in The New Republic, “The glamorization of sexual violence has reached its tipping point in popular culture…it’s a positive sign that the diversity of sexual preferences is being acknowledged by mainstream culture. What can be dangerous, and send out a sinister message, is those depictions which do not represent an image of consent, and can appear to legitimize physical abuse.” Just as Lorde expressed concern that the irony (and direct appropriation) in Del Rey’s lyrics could not be appreciated by her younger listeners, so too might one worry that “Cherry Wine” might leave an heady aftertaste in those who don’t know any better.

Herein lies the conundrum in terms of depicting domestic violence onscreen: if the physicality of the abuse is highlighted vis-a-vis carnal tension, it’s very easy for aggressive behaviors to seem a prelude to rough sex, and for peril to be conflated with passion. But if, as in "Cherry Wine," the visceral ugliness of abuse and its aftermath is replaced with soporific kitties and single-tear pathos, the real danger dissolves like too many tealights. At least a third of women murdered in the U.S. are killed by male partners, but it’s hard to believe that is a potential outcome for this woman, set as she is against a backdrop of acoustic strumming and low-wattage bulbs, no matter how awful that purpled eye is meant to look.

Some will say that popular artists are not beholden to accurately reflect common culture. I agree. If reflections were accurate, they would not be so popular; who wants to watch Ronan file a restraining order with a sprained wrist and pack up a bag of binkies? If Hozier’s hashtagging indirectly leads to such measures, let me be the first to applaud. But for they who have survived domestic violence—who have not only stoically “faced up” to their reflections but to their abusers and said “no”— the sappy aesthetics of “Cherry Wine” could add insult to injury.