Leave the Girl Scouts alone: Latest missive in the creepy, sexualized right-wing war on the youth group comes from a St. Louis archbishop 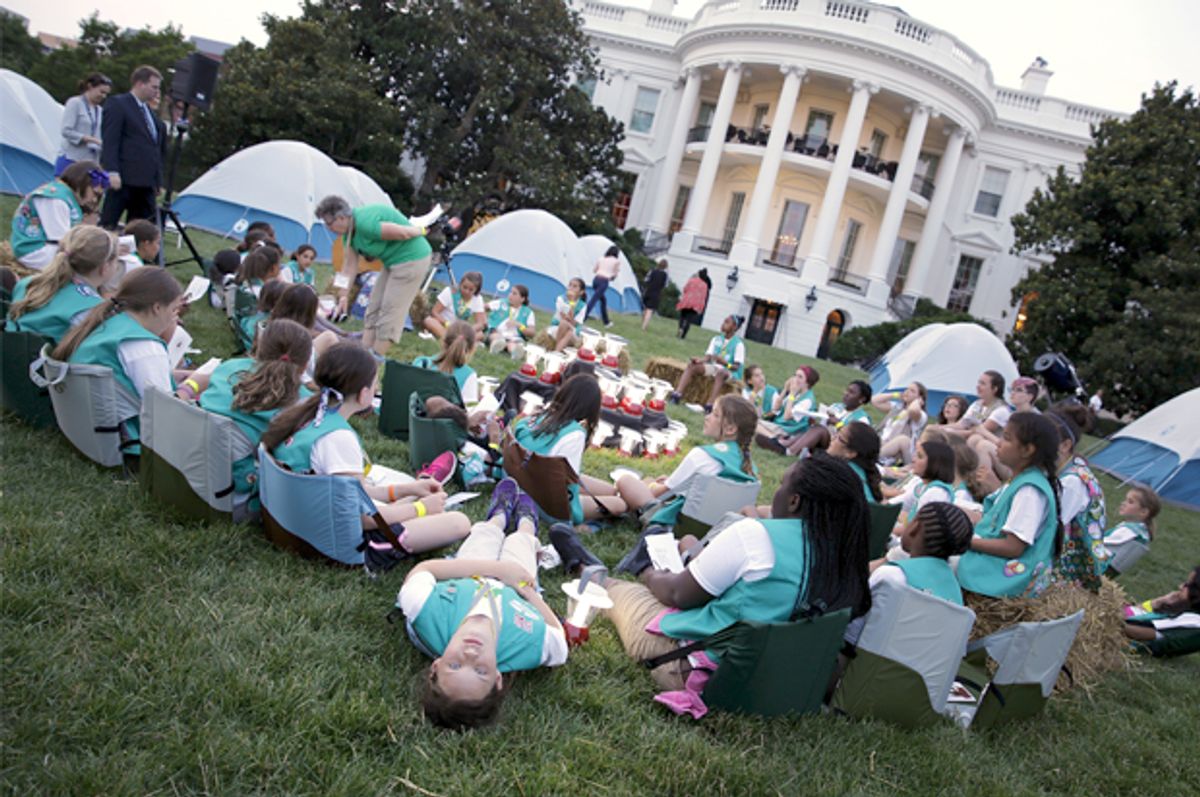 The conservative ability to throw the word "abortion" around to demonize any and all efforts to empower women to live lives untied from the stove has no limits, as evidenced by the ongoing war the religious right is waging on the Girl Scouts. Yes, the Girl Scouts, an organization that many on the right see as the next Planned Parenthood: An organization that they hate because it empowers young women, and they plan to take down with a liberal application of the word "abortion."

The latest missive in the right-wing war on the Girl Scouts comes from the St. Louis Archbishop Robert Carlson, who is encouraging churches to cut ties with the Girl Scouts because abortionabortionabortion.  In a letter sent out to parishes in the area, Carlson attacked the youth organization for promoting "role models in conflict with Catholic values, such as Gloria Steinem and Betty Friedan" and for being a member of an international scouting organization called the World Association of Girl Guides and Girl Scouts (WAGGGS), which Carlson denounces for the "promotion of contraception and 'abortion rights' on behalf of its girl members, the majority of whom are minors".

(That teenagers are better off having babies than not having babies seems like a controversial opinion, but it treated like a given by Carlson in his repeated denunciations of reproductive rights for minors.)

"In addition, recent concerns about GSUSA and their position on and inclusion of transgender and homosexual issues are proving problematic," Carlson adds. "Our culture is becoming increasingly intolerant of a Catholic worldview regarding these issues." Because the only way to be "tolerant" of Catholics is to deliberately and cruelly exclude LGBT youth from joining youth organizations, apparently.

It should be obvious, but the entire story is pure hokey right-wing nonsense. As I reported in Slate in 2011, what happened was that a couple dozen teen Girl Scouts (not the little girls CWA wants you to imagine) were sent to New York for the 54th Commission on the Status of Women at the United Nations. They were in the same building as Planned Parenthood, which had a meeting — not with the Girl Scouts — where a brochure aimed at adults, explaining how to have a happy sex life despite an HIV positive diagnosis, was among the materials. None of the Girl Scouts saw the brochure.

In other words, the Girl Scouts are being demonized with the abortionabortionabortion strategy because, and this is not a joke, 30 of them were in the same building as some people having a meeting about sexual health care. Even for right wingers, it's a stretch.

In reality,  the Girl Scouts of the USA doesn't take a position on sexual health care issues. Unlike their right-wing detractors, they grasp that young women have entire parts of their lives that aren't about their reproductive organs, and their work is focused on these other aspects of girls' lives, such as encouraging careers, education, and volunteer work. Not that sexual health isn't important, but it's just not their focus.

But to hear right wingers talk, you'd think that Girl Scout meetings are something naughty. Family Research Council claims the group is "pushing promiscuous sex on the girls."  Religious right organizer Kevin Swanson, whose "Freedom 2015" conference was attended by Ted Cruz, argued that the Girl Scouts is indoctrinating girls into lesbians and letting your daughter join them means they will see their daughters "growing up and becoming lesbians and homosexuals at 24 years of age." Linda Harvey of Mission America said the group promotes "suspicion toward males in general" and discourages "sexual self-restraint" in girls while also promoting lesbianism. She used the same examples as Carlson of "radical feminists Gloria Steinem and Betty Friedan", because right wingers are nothing if not just robots repeating the same stupid talking points as each other.

It's become such a problem for the Girl Scouts that they have a website explaining that they are not actually a lesbianism-conversion-abortion-orgy group and they heavily emphasize that being religious is perfectly normal in Girl Scouts, and that they even have a badge to reward girls who undertake religious study.

In 2000, Kathryn Joyce of the National Review laid out the anti-Girl Scout case that has taken off in the past decade or so, excoriating the organization for its various liberal values. She didn't leave a stone unturned, denouncing the organization for its racial diversity, sneering at its environmentalism, and flipping out because it refuses to ban lesbians from being scout leaders.

But what really got her angry was the way the Girl Scouts taught girls they had value outside of being sexual props and helpmeets for men. "Girl Scouts now can earn the 'Ms. Fix-It' badge for learning how to fix a leak, rewire an electrical appliance, or re-caulk a window," she recounts in horror, further shocking her audience with the revelation that Girl Scouts can also earn badges for doing anti-domestic violence work or for learning "stress management".

To Joyce's horror, the Girl Scouts even discourages eating disorders. "Scattered throughout the margins are a semester's worth of themes for after-school specials," she notes with rising horror, "including such statistical nuggets as, 'One-fifth of girls have used diet pills, more than one in six have forced themselves to vomit, and half have skipped a meal in order to lose weight.'" Why it's bad to teach girls healthy eating habits, I don't know, but perhaps the issue here is putting a priority on a girl's wellbeing over her desire to meet sexist beauty standards.

"The Girl Scouts' leaders hope to make their youthful charges the shock troops of an ongoing feminist revolution," with all this car-fixing, eating disorder-discouraging, anti-wife-beating work, Joyce argued.

And with that, the right-wing war on the Girl Scouts was off. As they learned long ago, however, telling the general public that feminism is bad because it encourages girls and women to get educated and have careers is a non-starter, so you have to make it sexy. Thus the myths about the Girl Scouts being a boot camp for lesbian conversion and abortion parties began. (Because nothing makes you have lots of abortions like being a lesbian.)

The real lesson here is that the right clearly doesn't intend to stop with the war on Planned Parenthood. Any organization perceived as helping women achieve independence and equality with men is subject to  a campaign involving heavy usage of the word "abortion" until they are marginalized, even a group as asexual as the Girl Scouts. Because this is not and never was about abortion, but about rolling back the gains women have made in the home and the workplace.