Betty Friedan would vote for Bernie: Gloria Steinem and other feminists need to hear this

I knew Friedan and I know she believed the system wasn't just about men and women, either 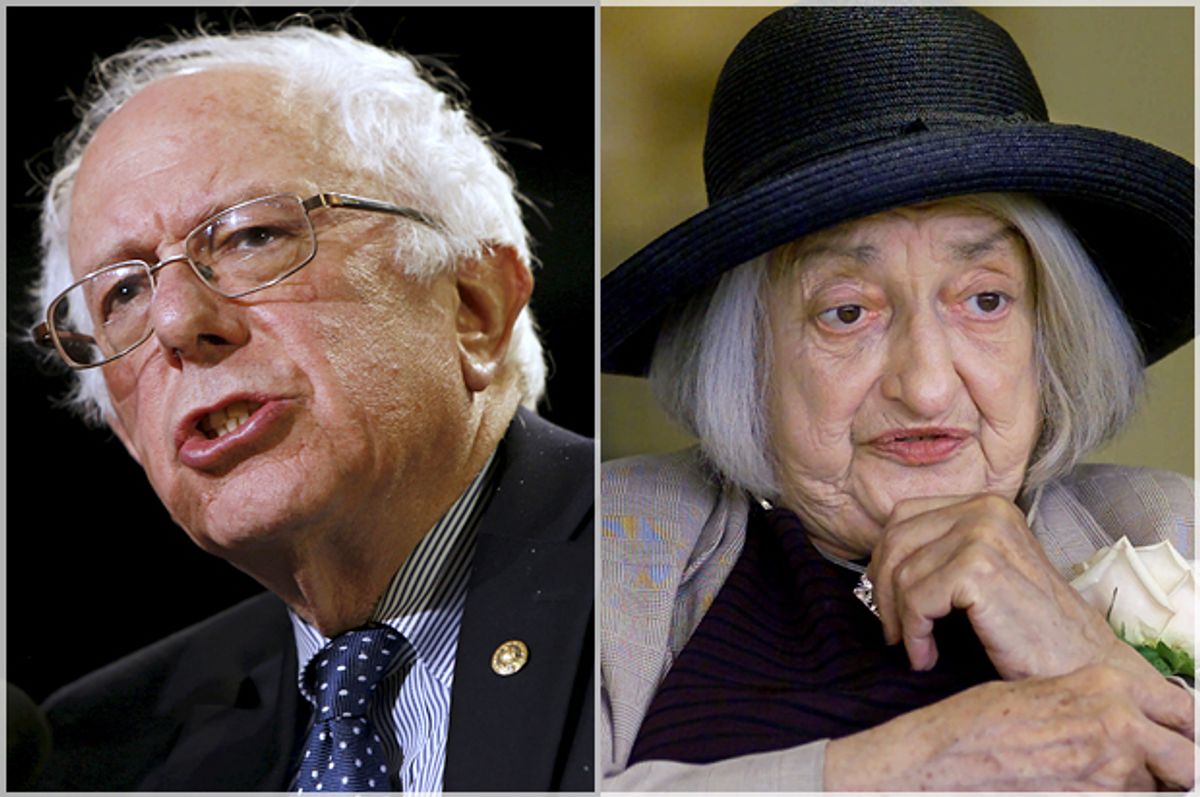 Betty Friedan would vote for Bernie Sanders. I say that having known Betty near the start of the women’s movement in the late ‘60s and at the end of her life. As a feminist, she was also a progressive committed to Bernie’s vision of economic justice. But I have another reason.

I knew Betty from 1969 when she brought me into the feminist movement, asking me to communicate to the media the message of feminism and of the National Organization for Women, of which she was founding president. Not an easy job in those days! From ridicule to don’t take too seriously to, well, there’s something significant happening. Rather like what Bernie has faced.

I was elected to serve 1970-71 as a national vice president of NOW. Afterwards, I continued to write and speak about feminism.

Here I am conferring with Gloria Steinem at the 1977 feminist conference in Houston.  I know that Gloria supports Hillary Clinton for the Democratic presidential nomination, as do many women my age who remember or were part of the ‘70s feminist movement. I’d like those women to consider what Betty told me and what she would tell them today.

It was Labor Day weekend 2005 at Betty’s cottage in Sag Harbor, Long Island, five months before her death. We talked for several hours. Ever intellectually curious, she wanted to know what I was working on.

After my involvement in NOW, I had returned to journalism and begun writing about other issues, though the focus was always social justice. In the 1980s, I visited several developing countries and wrote about their movements for democratization. It was a revelation for me when oppositionists in the Philippines, Haiti and Zaire (now the Democratic Republic of Congo) told me that the dictators (Ferdinand Marcos, Franҁois Duvalier and Mobutu Sese Seko) had stolen their country’s wealth and stashed it in Swiss banks.

I learned that Switzerland was an offshore secrecy haven that welcomed dictators, corporations and a variety of crooks and tax cheaters who set up secret bank accounts and fake shell companies to launder their ill-gotten profits and loot. As a journalist, I started looking into that story in 1997.

So, in Sag Harbor, I told Betty about the offshore bank and corporate secrecy system. I told her how it abetted rich individuals and corporations cheating on their taxes, assisted international corporations sucking money out of developing countries and helped drug traffickers and other criminals laundering their booty. All done with the acquiescence of the U.S. government that could end the system at will by refusing tax havens access to the U.S. financial system in the name of “national security,” as it does “terrorist” banks.

Since Betty had worked as a writer for the United Electrical Workers Union newspaper, UE News, she had a good grasp of the toxic power often exercised by corporate interests. She was a woman of the left. The UE was a leftwing union, still considered one of the most democratic and politically progressive national unions in the country. She was fascinated by what I told her and asked many questions.

At the end of the conversation, Betty was thoughtful. Finally, she commented: “We didn’t challenge the system enough.”

In the context, that wasn’t about male and female. The “system” was an economic system that is rigged and corrupt, that allows powerful money interests to grind down the rest of us.

Lest anyone think that I have recalled this conversation for the purpose of the current campaign, note that I referred to this in an article in 2013 on the fiftieth anniversary of Betty’s groundbreaking book, “The Feminine Mystique.” UPI ran the story. A college professor, who took our photo, witnessed her remarks. Betty started a revolution. But towards the end of her life, she knew, as others in the women’s movement would recognize, that the vision we shared then was not broad enough – not for middle and working-class women, not for minority women, not for anyone but the very rich -- and that the revolution had far to go.

The disaster of the Obama presidency that put Wall Street avatars in positions of economic power so they could scam the rest of us was a lesson. Don’t vote for race (as I was persuaded to do in 2008) or gender or anything but policy. There will be good minority and female aspirants for top office if we open up the system.

Rather than support a flawed woman candidate who would not challenge the corporate order, Betty would vote for Bernie.

Lucy Komisar writes about corporate and financial corruption. She became a journalist after spending a year (1962-3) as a college student volunteer editor of the “Mississippi Free Press,” a civil rights weekly in Jackson, Miss. She joined NOW after experiencing discrimination seeking jobs in journalism.