Scalia truthers are all-American: "The Declaration of Independence is based on a conspiracy theory" 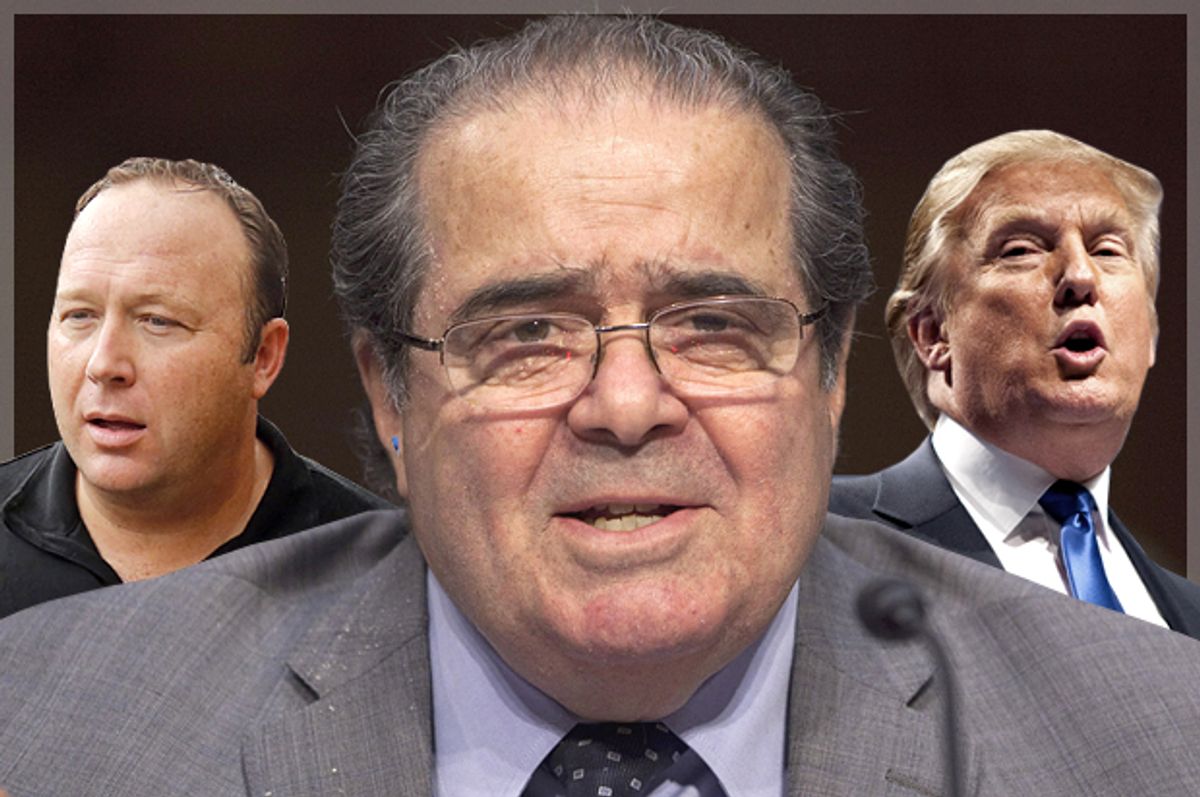 Why do people believe in conspiracies? Joseph Uscinski, a political science professor at the University of Miami, has spent much of his career studying them, and co-authored a book, “American Conspiracy Theories,” Oxford University Press, in 2014. This week, he was struck by the almost instant response to Scalia’s death. As he wrote in the Washington Post:

Supreme Court Justice Antonin Scalia died just days ago, but already conspiracy theories about his death abound. Radio talk-show host Alex Jones suggested that a pillow found near Scalia’s head might indicate that he’d been suffocated. Some retired detectives said the lack of an autopsy was evidence of a cover-up. One website (the aptly named Trunews) wondered whether the CIA used heart-attack-inducing drugs to kill the justice. Even Donald Trump joined the fray, calling the death “pretty unusual.”

We spoke to Uschinski about what causes conspiracies, the effects they have on our politics, and the awkward fact that sometimes conspiring really occurs.

So why are people spinning all kinds of theories about Scalia’s death? He was almost 80 years old – why is it so hard for people to believe he died of natural causes?

You’d think most people would just accept it, given that he was an overweight 79-year-old who lived a sedentary lifestyle. And since he died in his sleep, and the authorities don’t suspect any foul play, you’d think people would accept that. But, it’s how people interpret events: It’s the event plus their predisposition that lead to how they interpret it. So a Republican can see job numbers, and a Democrat can see job numbers, and they come to completely different conclusions.

So in the case of Scalia, you have two predispositions going on. One of them is partisanship. Republicans see that Obama has something to gain if Scalia were to die, so they are more likely to see that Obama did something to cause it to happen. Whereas Democrats have no reason to think that’s the case; they don’t think their guy is a murderer. While Republicans might.

The other one is that to one degree or another, we all have some level of a worldview toward conspiracy. So some people see conspiracies lurking everywhere, there’s one lurking behind every corner. And other people don’t believe that – they think people do what they say they’re going to do, institutions act in ways that are beneficial, and powerful people don’t abuse their power generally.

It sounds like you’re saying that a bent to conspiracy is baked into most of us – it’s not just a small fringe.

But most people are somewhere in the middle. We’re open to the idea of conspiracy under certain circumstances, if they comport with our other worldviews. In the case of Scalia, Republicans accuse Democrats of conspiracy because they have something to gain.

A very good example of this is birthers and [9/11] truthers. They existed in about equal numbers. If you go back to the polls, about 40 percent of Democrats thought some kind of conspiracy was going on about 9/11, and about 40 percent of Republicans thought Obama was faking his birth certificate and born somewhere else.

Your point is that neither side of the aisle, politically, has a monopoly on this kind of thinking.

To what extent is conspiracy a personal thing -- having to do with individual psychology -- and to what extent is it social and political conditions priming people to see patterns?

Those are two very good and separate questions.

As far as the second question, things will drive conspiracy theorizing. When Obama was elected, all of a sudden 9/11 conspiracy theories effectively disappeared from our vernacular. And theories about Democrats and Obama and Communists overtook them. And we see that over time.

One of the things we did in the book was look at letters to the editor of the New York Times over 120 years. And we read about 120,000 letters and picked out the ones that talked about conspiracy theories. Over time, whoever was in the presidency, it was them, their party, their coalition that got all the accusations made at them. Usually by the out party.

And then when power switches hands, when a new president from a new party comes in, all of a sudden the conspiracy theories switch. So for the last seven years everything is, “Obama did this, to get something. He shot the kids in Sandy Hook to get gun control. He blew up the oil well in Deep Horizon to get green energy policy. He faked his birth certificate.”

Conspiracy theories almost always talk about the person with the most power. So when there’s a new president, it will be that person accused of all the bad stuff.

There must be societies that produce more conspiracy theories than others; what kinds of societies engender this kind of thinking?

It’s really tough to know, because most of the work that’s been done on this, about collecting data and surveying people, has taken place in the last eight years, to say that this country is more conspiratorial than that country.

But, the U.S. is sort of an anti-conspiracy country.

Despite all these conspiracy theories that we’ve had?

So while these conspiracy theories are prominent in the news, and we continually try to understand them, it makes us focus on them too much. And for the most part, we’re fairly sane despite our presidential candidates.

I wonder what kind of effect conspiratorial thinking has on our politics, or any nation’s politics.

You see a lot of conspiratorial rhetoric coming from particular candidates: Populism tends to be tied to conspiracy theories. You have these ideas: There’s a small group of people who control everything, they hold all their meetings in secret in some dark room, they don’t care about you, it’s ruining your life — and I’m going to change it.

You see some of that rhetoric in Bernie Sanders: “The 1 percent has rigged the system against you, they’re greedy and their greed knows no end. And they’re making it hard for you to survive.”

Trump does this, too. “When I get into office, I’m going to get to the bottom of San Bernardino.” The clear implication is that somehow the FBI is hiding the truth … Trump has a history of [conspiracy theory] too.

There are times when conspiracy theory has really affected policy… Look at the Red Scare – there were policies passed banning Communism, laws that took away rights…

[More recently], Obama had to come out and present a birth certificate. Instead of working on the two wars and the economy, and the middle of a depression he had to come out because of Donald Trump.

But there were good things, too – the 9/11 Commission probably would not have happened if it weren’t for conspiracy theorists.

The report was provoked by people challenging the official story, right?

That’s right. And there are so many documents released about the JFK assassination, and there have been additional hearings because of conspiracy theorists. So that’s a good thing. There are bad things to come out of it, but there are also good things sometimes.

And the fact that we call it conspiracy theory doesn’t mean that conspiracies don’t sometimes happen. I think the historical record shows that sometimes, powerful people conspire. So is a bit of conspiratorial thinking healthy?

It’s healthy and it’s necessary. The separation of powers in our Constitution is based on a conspiracy theory: If you let one group of people have too much power, they’ll abuse it. It’s why we have separate branches, so they push back against each other.

The Declaration of Independence is based on a conspiracy theory. You have a couple paragraphs of beautiful writing, and then you get to these conspiracy accusations against the king.

But [conspiracies] do happen. You have your Watergates, your Iran-Contras: Bad things happen. And it’s good that there are conspiracy theorists to constantly push back and make these accusations. If you think about it, there were two reporters at the Washington Post who followed a conspiracy theory and brought down a president.