The 15 most racist Oscar films of all time: Here's why #OscarsSoWhite is not a surprise 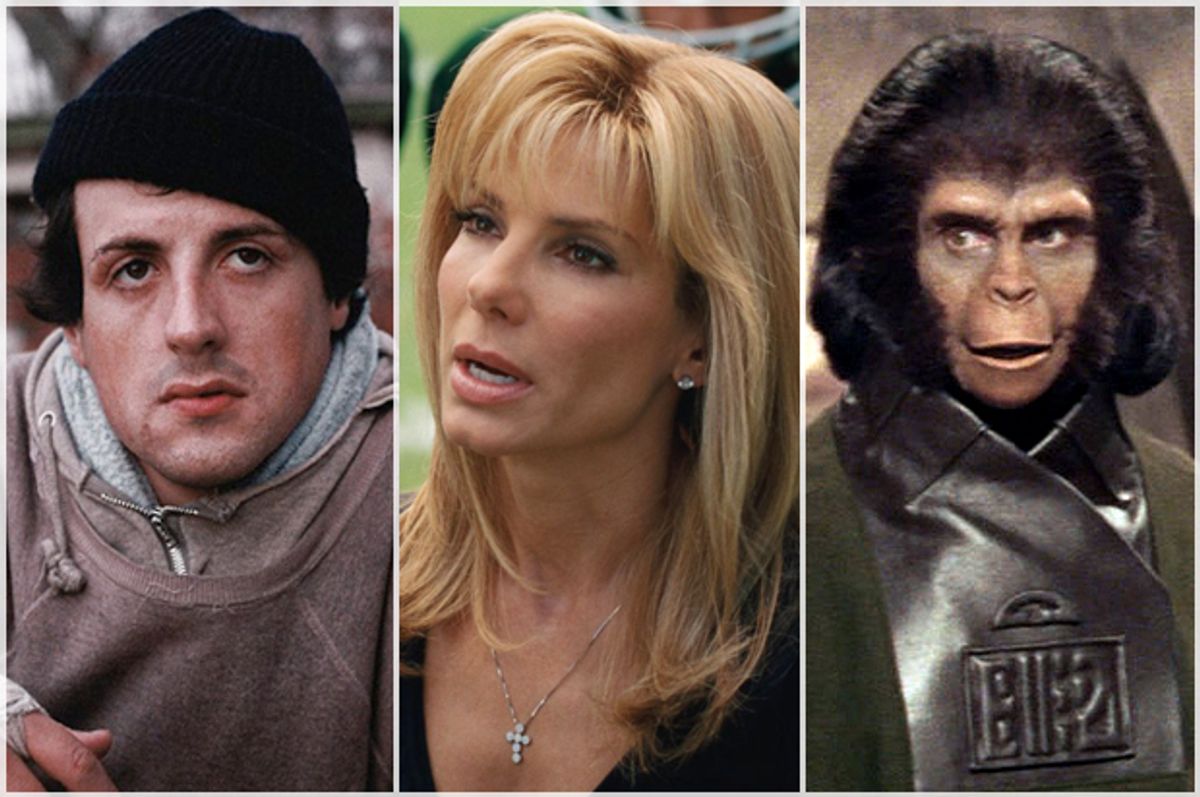 A whopping zero Black people were nominated in the individual acting categories for the upcoming 88th Academy Awards. And the Academy’s recent pledge to double its non-White members has hardly calmed the storm of dissent surrounding the So White Oscars. Jada Pinkett Smith still plans to boycott the Oscars. Other Black stars are being courted by the Academy to appear as presenters.

It is quite imprudent if the Academy thinks trotting out Black stars to present awards to White stars will save face. It may actually deepen the antiracist hostility to the Oscars—a hostility that has been brewing for decades.

Here are the fifteen most racist films ever honored by #OscarsSoWhite.

In this blockbuster, Elizabeth Taylor plays Cleopatra, the last pharaoh of ancient Egypt. It did not matter to the filmmakers that Cleopatra actually looked much more like Cicely Tyson. To cast an Egyptian pharaoh as anything but a White person would have been out of step with the racist fantasies the filmmakers desired to capitalize on. Whitewashing glorious non-Whites in history has been one of Hollywood’s favorite pastimes. As quite possibly the most acclaimed and popular movie on ancient Egypt, "Cleopatra" Whitewashed Black Egypt in the American mind probably more than any other film.

"The Passion of the Christ" did much more than tragically reinforce the myth that evil Jews killed Jesus—a myth that has inflamed anti-Semitic sentiment for centuries. If "Cleopatra" is the most notable cinematic Whitewashing of ancient Egyptians honored by the Oscars, then "The Passion of the Christ" is the most notable cinematic Whitewashing of Jesus honored by the Oscars. Jim Caviezel starred as Jesus Christ, satisfying the racist theological imagination that can only envision the son of God as a White man. To racist logic, just as the ancient Egyptian fashioners of human civilization must be White, God and his perfect god-son—the creators and saviors of humanity—must be White. Maybe the lightning that struck Caviezel during the filming of "The Passion of the Christ"—scourging him badly—was also meant to strike at this universal perception of Jesus as White.

This animated film produced by Walter Disney contained eight segments set to classical music. In "The Pastoral Symphony" segment, Disney presents an ancient Greco-Roman world of centaurs—heads of humans, bodies of horses—where Black female centaurs shine the hooves and groom the tails of the prettier White female centaurs. Critics immediately hailed "Fantasia" as a masterwork of animation, neglecting to mention it animated the racist ideas of Walt Disney for gullible American children.

Set in New Orleans in 1852, "Jezebel" is a romantic story about a White southern belle violating the norms of elite femininity, costing her the man she loves. But racist Americans do not lose out on the beautified plantation era they loved in the 1930s. The ugliness of slavery’s brutality and Black resistance are palpably absent in "Jezebel." Instead, the film pictures honorable, paternalistic White enslavers, who seem as fancifully normal as ultra-submissive, comforting Black house slaves.

Black people had long been likened to apes in racist mythology. And so, it is hardly a stretch to say the film’s apes—who enslave the White astronauts after their long space journey—signify Black people in this movie. After one White astronaut escapes, he comes upon a rusted Statue of Liberty, and suddenly realizes he’s back on earth. After years of domestic and foreign antiracist rebellions, racist Americans actually feared a violent Black revolution could be on the horizon in early 1968—fears reflected in "Planet of the Apes." To racist Whites, there could only be White supremacists or Black supremacists in power. An equitable society is beyond the racist imagination.

If "Planet of the Apes" epitomized racists’ defeated sentiments amid the antiracist movements in 1968, then "Rocky" epitomized their fighting sentiment in 1976. Rocky Balboa—a kind, humble, hard-working, slow-talking journeyman boxer—symbolized the pride of racist White masculinity in the late 1970s. Rocky refused to be knocked out by the avalanche of punches from the antiracist movements—as symbolized by the rich, unkind, cocky, fast-punching Black heavyweight champion. Apollo Creed is a fictional stand-in for the actual heavyweight champion in 1976, Muhammad Ali, the personification of antiracist resistance.

"Out of Africa" remains quite possibly the most popular Lost Cause colonial fantasy movie in Hollywood history. In the midst of the global activism against apartheid South Africa, "Out of Africa" gave conscious and unconscious White supremacists from Nairobi to New Orleans to Durban the ability to reminisce about the good ole days of European colonization of Africa. It depicted a White woman’s personal and commercial difficulties as a plantation owner in Kenya—symbolic of Europe’s foray into Africa that seemed to be coming to an end. Of course, the Kenyan servants in their odd uniforms exist and act merely in relation to their White colonial masters, while the other Kenyans remain literally and figuratively on the frontier. Set and filmed in Kenya, the local people boomed in their charges of racism, which the filmmakers brushed off on route to their #OscarsSoWhite.

This film tells the tumultuous story of two escaped male convicts. This White and Black man are chained together and must learn to work together to secure their freedom. "The Defiant Ones" became the gold standard for one of the most popular racist film types—one that #OscarsSoWhite loves to award—the interracial buddy film. From the 1950s forward, filmmakers used the buddy film as a way to desegregate casts. As film scholar Ed Guerrero explained, Black stars supposedly needed a White “buddy” chaperone as the lead actor or co-star to ensure the Black presence conformed to White sensibilities and expectations of Blackness, thereby safeguarding box office success.

1 Academy Award for Best Actress (plus nomination for Best Picture)

Possibly even more than the interracial buddy film, the #OscarsSoWhite enjoys honoring the White Savior Flicks. In these flicks, paternalistic White parents or coaches or journalists or soldiers or lawyers or educators are portrayed as saving needy Blacks from bad situations, or their inferior selves, or the Black jungle. Of all the White Savior Flicks in Hollywood history—and there are many—"The Blind Side" may have been the most egregious. It shared the “true story” of a White family caring for a homeless boy who they guide into professional football. The contrast between the film’s Black characters hindering and holding Michael Oher’s character back—and Sandra Bullock’s helpful White characters are intense to even the least discerning viewer. Filmmakers enjoy regularly searching out and projecting “true stories” of White saviors, hiding the reality of many Black saviors and White discriminators, reinforcing racist ideas of White paternalism and Black dependence.

In a parade of films during the mid-twentieth century, Hollywood producers loved wrapping bandanas around happy, tough, huge Black female “Mammy” characters, masculinizing Black femininity, emphasizing the ultra-femininity of their counterparts, White women. Light skin Black women saw either the exotic or tragic mulatto, failing to be assimilated into White womanhood, failing to win White men as Black women, which was the storyline in "Pinky." In the end, after she stops passing, Pinky Johnson’s White lover asks her to resume her passing life as a White woman. She refuses (and lives out her life on the land of an actual White woman). White women usually played these exotic or tragic biracial woman. In "Pinky," a White actress named Jeanne Crain starred as Pinky, while Ethel Waters played her cybernetic Mammy.

In the "Song of the South," Walt Disney celebrated the docile, contented slave character of Uncle Remus, created and popularized by Joel Chandler Harris in the late 19th century. James Baskett starred as Uncle Remus and Disney cast Hattie McDaniel in her customary role as the happy Mammy. Though set in the 1870s, it pictured the Lost Cause mythology of servile Black slavery. The racist nostalgia saturating the film profoundly enraged Black people. "Song of the South" became the most protested film by antiracists since The Birth of a Nation.

Much of "The Green Mile" revolves around a gigantic Black death row inmate named John Coffey, facing execution for raping and killing two White girls. A superman in size and boy in personality, Coffey is the picture perfect rendition of racists beloved archetypal magic Negro. Coffey uses his magical powers to heal White authority figures and punish their enemies. Coffey uses his magic to show his innocence. But he amazingly does not use his magical powers to liberate himself—or oppressed Blacks in the segregated south of the 1930s. Coffey allows himself to be executed, and passes on some of his magic powers to his noble White authority, a prison guard played by Tom Hanks. "The Green Mile" is so racist because its storyline is one of the most unbelievable in Hollywood history. It is only believable through the illogic of racist ideas.

"King Kong" shares the adventure tale of a colossal, primordial, island-dwelling ape who dies attempting to possess a beautiful White woman. Reviewers lauded the film for its originality. But in actuality, King Kong was nothing but a remake of "The Birth of a Nation" (1915)—that inaugural Hollywood film that hit box offices with its racist ideas before #OscarsSoWhite. "King Kong"’s producers veiled the physically powerful Black man by casting him as the physical powerful ape. In both "King Kong" and "The Birth of a Nation," the Negro-Ape terrorizes White people, tries to destroy White civilization, and pursues a White woman, leading to the lynching of the Negro-Ape. In one sense, "King Kong" was stunningly original and ahead of its time—it exhibited racist ideas without ever saying a word about Black people.

Based on Margaret Mitchell’s Pulitzer-winning 1936 novel, "Gone with the Wind" shares the story of the strong-willed daughter of Georgia enslavers and her pursuit of a married man. The White enslavers are portrayed as noble and thoughtful; the slaves as loyal, shiftless and unprepared for freedom, especially the film’s iconic Mammy, played by the first Black Academy Award winner, Hattie McDaniel. Despite Black protests, the film smashed box-office records as hard as it smashed the truth of slavery, becoming the most successful film in Hollywood history.

Hollywood’s all-time beloved Tarzan trope—a White man venturing into a non-White society, learning and mastering its ways, attracting the pretty woman, and then saving the day—reran in "Avatar." But in nearly all of the previous Tarzan remakes—from "The Last Samurai" (2005) to "Dancing With Wolves" (1990)—the White men are not utter and complete failures. What sets Avatar apart—and what sets its racism apart—is its extreme use of the racist Tarzan trope.

In "Avatar," the main White male character is portrayed as a complete failure unable to walk literally and figuratively in White society. He is sent to the “hell” of Pandora where dark enormous “natives” with braids and locs live—an undeniably symbol of a Black society. This failure in White society quickly masters the ways of the Na’vi, amazingly conquering Pandora’s most unconquerable animal, amazingly out-excelling the Na’vi’s best warrior, amazingly attracting the chief’s desirable daughter, and most amazing of all—compelling the Na’vi’s God to do something unprecedented, thereby saving the Na’vi from annihilation. A projected failure in White society becomes almost godlike in this symbolic Black society. Only in Hollywood.

Since Whites are so far superior, a feeble White man could literally step down and join the inferior Blacks and quickly and easily become the best. This is the most tyrannical idea in the ideology of racism, and "Avatar" reinforced it in the unguarded minds of millions.

Watch our video recap for a peek at five of these racist films: