Another Common Core disaster: Corporate-education reformer John King is exactly the wrong man to be secretary of education 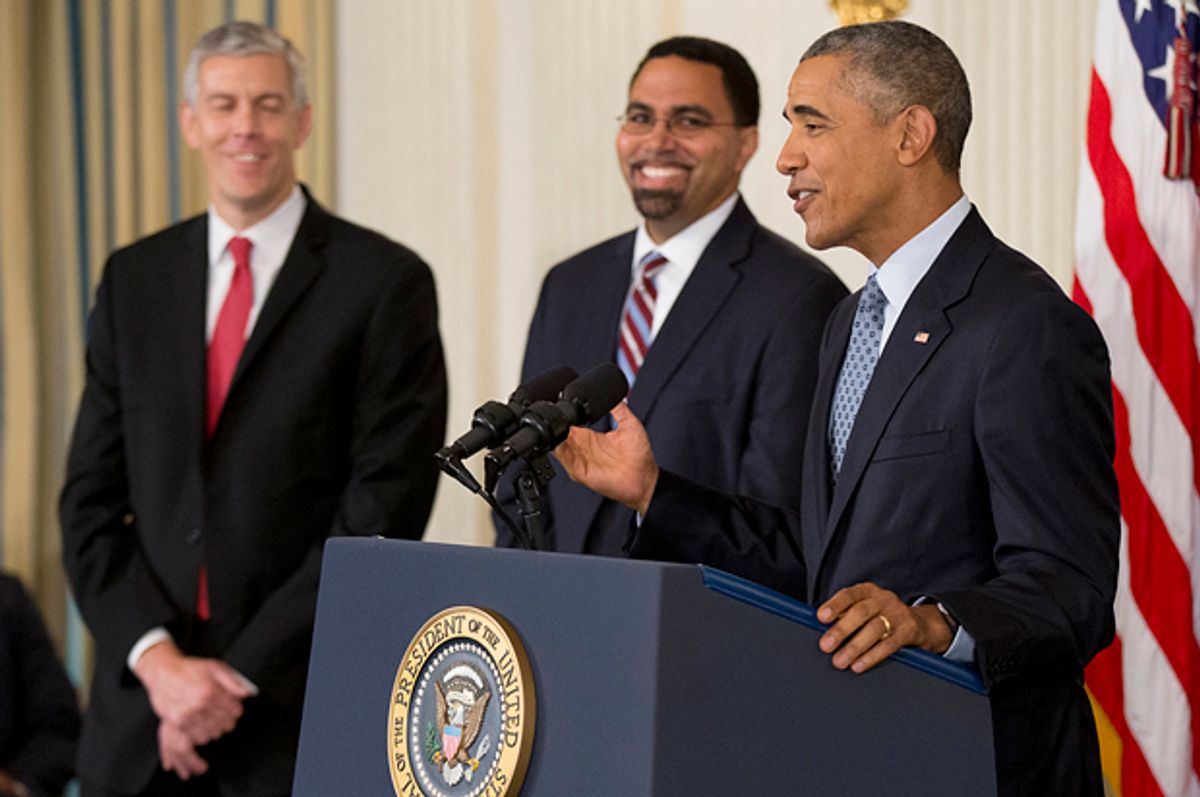 On Thursday, the U.S. Senate Committee on Health, Education, Labor, and Pensions will hold a confirmation hearing for John King Jr., President Obama’s nominee for the position of secretary of education. King has served as the acting education secretary since the beginning of the year after Arne Duncan, who had fulfilled a seven-year tenure, stepped down.

King has been one of the most influential and loathed figures of the corporate school-reform movement in recent years. A growing body of research and evidence has suggested that the policies he has peddled throughout his career have been ineffective and destructive to communities, educators and students, especially to the population he claims to be working on behalf of: poor African-American and Hispanic children. The committee should reject his nomination and call on President Obama to nominate a serious candidate who supports equitable, progressive public education for all.

In 1999, King co-founded Roxbury Prep, a “no excuses” Boston charter middle school that educates mostly poor African-American and Hispanic students. The school features a regimented learning environment. Students who fail to follow the dress code are not permitted to attend class. A 2004 U.S. Department of Education report explained, “Students are required to be in line and silent in the halls when passing from one class to the next. In class they are expected to be focused and on task.” It was King, as the New York Times reported, who implemented many of these structures as co-director.

In 2011, King was named the education commissioner of New York state. He oversaw the rocky implementation of the Common Core standards. The standards, which are currently adopted by 43 states (and falling by the day), dictate what children must know and be able to do in each grade level from kindergarten through 12th grade. Bankrolled by the Gates Foundation, they were crafted by the National Governors Association in partnership with Achieve Inc. States were then bribed by the Obama administration with Race to the Top initiative monies to enact them, dovetailing with a time when school budgets were being heavily slashed due to the economic recession.

From Buffalo to the east end of Long Island, in the fall of 2013, John King went on a whirlwind of a tour beating the drum for the standards. At each public meeting, he was verbally flogged, justifiably, by the parents, teachers and students who testified. The number of grievances of the Common Core raised by the speakers were numerous: the meteoric speed at which the standards are being implemented, the lack of teacher, parent and student input in their design, the fact that they haven't been field tested in a state let alone a school district, the meager amount of teacher training for the standards, the startling amount of topics and subjects covered in the curriculum, the attack on teacher autonomy in the classroom, the increase of the high-stakes standardized tests accompanying them, the federal government's overreach into education, and many others. All of which King displayed an utter tin ear toward, proclaiming, "Now is not the moment for a delay."

At one forum, Beth Dimino, a veteran science teacher and president of her local teachers union, tore into King. She told him, “I was judged as ‘highly effective’ last year . . . Obviously, Mr. King, you’re ineffective. Seventy percent of the children in this state failed your test.” It was true. In 2013, just 31 percent of students in New York passed the English and math standardized tests, the first tests to be aligned to the Common Core. Math scores marginally improved and reading scores stayed stagnant in 2014. About 60,000 children opted out of the tests and then the next year, a whopping 200,000 students, or 20 percent, did the same.

Dimino called for King's resignation as did the state teachers union New York state United Teachers (full disclosure: I spoke at their Albany rally in 2013) and other public education advocacy groups. He acted more like a tyrant, persistently refusing to consider the desperate pleas of students and teachers who were reporting that the Common Core and value-added teacher evaluations were not working and detrimental to robust teaching and learning.

As I note in my new book, "Schools on Trial: How Freedom and Creativity Can Fix Our Educational Malpractice," one of the dark stains on the Obama legacy is the administration’s enthusiastic embrace of corporate education reform, which is characterized by high-stakes standardized testing, charter schools, school closures, attacks on teachers unions, and others. This has been lavishly funded by Wall Street financiers, foundations and billionaires. In 2013, the Economic Policy Institute’s Broader, Bolder Approach to Education published a report concluding that market-oriented reforms “delivered few benefits” and “often harm the students they purport to help.”

Students, teachers and parents have had enough. They’ve opted out, organized, and taken to the streets to manifest their frustrations and demands. They deserve an education secretary who will advocate for their interests, not those of the testing corporations and billionaires. John King is not the answer.

Nikhil Goyal is the author of the new book "Schools on Trial: How Freedom and Creativity Can Fix Our Educational Malpractice," which was published by Doubleday, an imprint of Random House, this month.