Democrats face a stark choice: A money-mad, scandal-plagued establishment, or the potential of decency and change 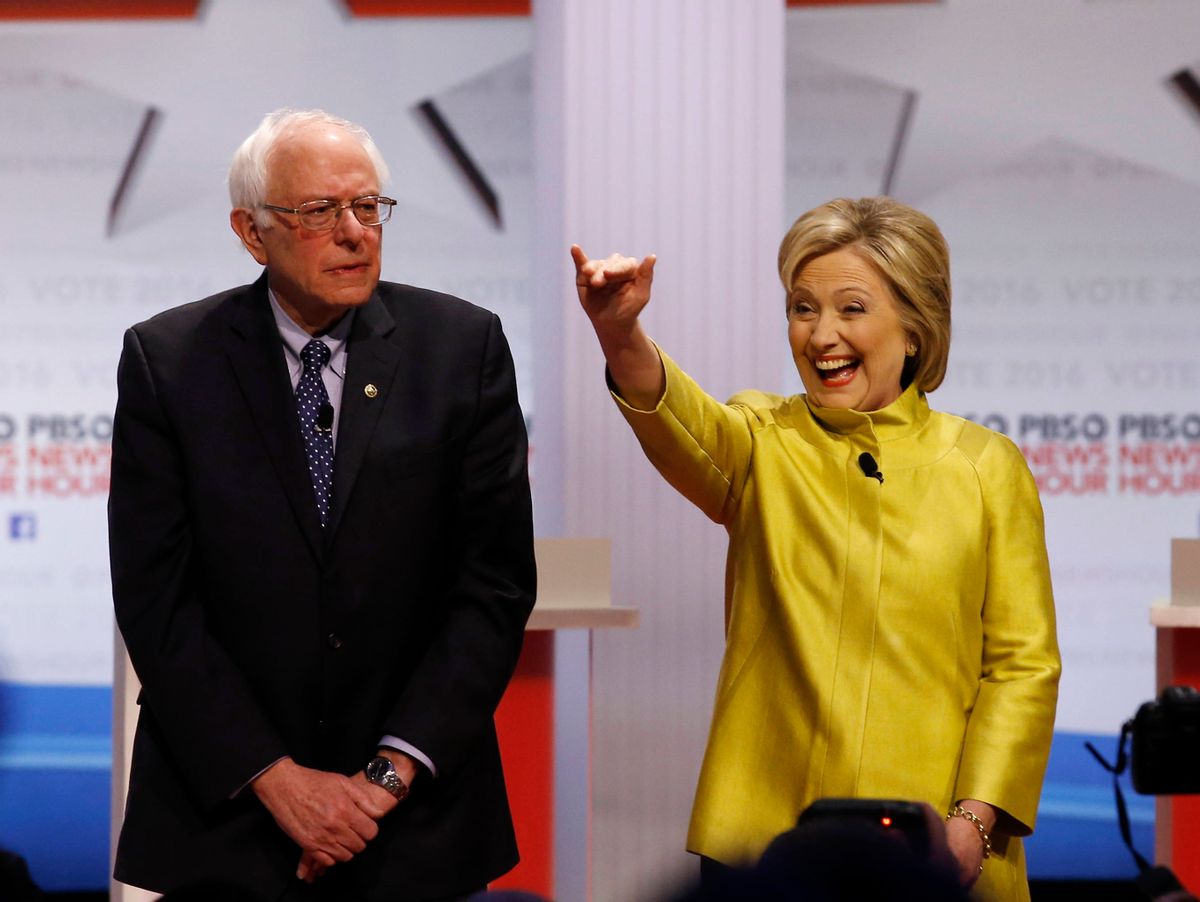 Despite Bernie Sanders being tied with her for pledged delegates after last weekend’s Nevada caucuses, the media herd has anointed Hillary Clinton yet again as the inevitable Democratic nominee.  Superdelegates, those undemocratic figureheads and goons of the party establishment, are by definition unpledged and fluid and should never be added to the official column of any candidate until the national convention. To do so is an amoral tactic of intimidation that affects momentum and gives backstage wheeling and dealing primacy over the will of the electorate.  Why are the media so servilely complicit with Clinton-campaign propaganda and trickery?

Democrats face a stark choice this year.  A vote for the scandal-plagued Hillary is a resounding ratification of business as usual--the corrupt marriage of big money and machine politics, practiced by the Clintons with the zest of Boss Tweed, the gluttonous czar of New York’s ruthless Tammany Hall in the 1870s.  What you also get with Hillary is a confused hawkish interventionism that has already dangerously destabilized North Africa and the Mideast.  This is someone who declared her candidacy on April 12, 2015 via an email and slick video and then dragged her feet on making a formal statement of her presidential policies and goals until her pollsters had slapped together a crib list of what would push the right buttons.  This isn’t leadership; it’s pandering.

Thanks to several years of the Democratic party establishment strong-arming younger candidates off the field for Hillary, the only agent for fundamental change remains Bernie Sanders, an honest and vanity-free man who has been faithful to his core progressive principles for his entire career.  It is absolutely phenomenal that Sanders has made such progress nationally against his near total blackout over the past year by the major media, including the New York Times.  That he has inspired the hope and enthusiasm of an immense number of millennial women is very encouraging.  Feminists who support Hillary for provincial gender reasons are guilty of a reactionary, reflex sexism, betraying that larger vision required for the ballot so hard-won by the suffrage movement.

The Democratic National Committee, as chaired since 2011 by Clinton sycophant Debbie Wasserman Schultz, has become a tyranny that must be checked and overthrown.  Shock the system!  Here are the flaming words of one of my heroes, Mario Savio, leader of the Free Speech Movement at the University of California at Berkeley.  In 1964, he declared from the steps of Sproul Hall to a crowd of 4,000 protesters:  “There’s a time when the operation of the machine becomes so odious, makes you so sick at heart that you can’t take part! You can’t even passively take part!  And you’ve got to put your bodies upon the gears and upon the wheels, upon the levers, upon all the apparatus, and you’ve got to make it stop!”

A vote for Bernie Sanders is a vote against the machine, the obscenely money-mad and soulless juggernaut that the Democratic Party has become.  Perhaps there was a time, during the Hubert Humphrey era, when Democrats could claim to be populists, alive to the needs and concerns of working-class people.  But the party has become the playground of white, upper-middle-class professionals with elite-school degrees and me-first values.  These liberal poseurs mouth racial and ethnic platitudes, acquired like trophy kills at their p.c. campuses, but every word rings hollow, because it is based on condescension, a patronizing projection of victimhood onto those outside their privileged circle.  There is no better example of this arrogant class bias than Wellesley grad Hillary Clinton lapsing into her mush-mouthed, Southern-fried dialect when addressing African-American audiences.

Sanders is no Communist, bent on seizing centralized control of business and industry. He is a democratic socialist in the Scandinavian mode, where social welfare is predicated on cooperation and shared sacrifice. Whether such a system can work in the vastly larger and more culturally diverse U.S. is another matter. The financial viability of his proposals would certainly be stringently vetted by Congress, which holds the purse strings of the national budget. But Sanders’ attack on the crass excesses and unpunished ethical lapses of Wall Street is a great awakening call, at a time when the U.S. has disastrously lost its manufacturing base and when the super-rich have accumulated proportionally more wealth than at any time since the Gilded Age of the late 19th century.

The Sanders theme that is closest to my heart is his call for free public universities. Thanks to the G.I. Bill, my father, returning from active duty as a paratrooper in occupied Japan, became the first member of his large family to attend college.  I was born while he was still in school and meeting expenses by mopping the cafeteria floor. The State University of New York added Triple Cities College to its system in his final year; hence his class was the first to graduate from the newly named Harpur College, which soon relocated from the factory town of Endicott to Vestal, near Binghamton.

The public education that I received at Harpur College during the 1960s (I appear to have been its first second-generation graduate) was superb, not simply for its excellent faculty and cultural programs but for its dynamic student body with a large constituency of passionately progressive Jews (like Bernie Sanders) from metropolitan New York City.  Gov. Nelson Rockefeller, a liberal Republican, was pouring funds into the State University of New York in his attempt to rival the University of California.  The cost to my parents for my four years of college was amazingly minimal.

It is an intolerable scandal that college costs, even at public universities, have been permitted to skyrocket in the U.S., burdening a generation of young adults with enormous debt for what in many cases are worthless degrees. The role played by the colleges themselves in luring applicants to take crippling, unsecured loans has never received focused scrutiny. Perhaps a series of punitive, class-action lawsuits might wake the education industry up. Until the colleges themselves pay a penalty for their part in this institutionalized extortion, things are unlikely to change.

As college became accessible to a wider and less privileged demographic following World War II, many state legislatures were initially generous in their funding. But that support rapidly diminished after the recession and oil embargo of the 1970s. Instead of prudently retrenching and economizing, public universities charged ahead and began raising tuition, in tandem with increasingly expensive private schools. Colleges became overtly commercialized and consumerist in their pursuit of paying customers. The annual college ranking by U.S. News & World Report, which began in 1983, triggered a brand-name hysteria among upwardly mobile parents and turned high school into the nightmarish, gerbil-wheel obsession with college applications that it remains today.

The steady rise in college tuition, leading to today’s stratospheric costs, began in the 1980s and was worsened by a malign development of the 1990s:  the rapid swelling of a self-replicating campus bureaucracy, whose salaries exceeded those of most faculty.  The new administrators, with their corporate and technocratic orientation, had an insular master race mentality and viewed faculty as subordinate employees. The flagrant corporatization of the university was outrageously ignored by the faux Leftists of academe, trendy careerist professors who sat twiddling their thumbs, as they played their puerile poststructuralist and deconstructionist word games. As a consequence, faculties nationwide have fatally lost power and are barraged by dictatorial directives from tin-eared campus bureaucrats enforcing a labyrinth of intrusive government regulations.

Simultaneously in the 1990s began the redefining of college as a comfortable extension of the bourgeois living room. Parents expected a big bang for their buck—bright and shiny dormitories with single rooms; lavish exercise facilities; cafeteria buffets of restaurant range and quality. Meanwhile, many large second-tier schools began to rely on an army of poorly paid and exploited adjunct teachers, who had to migrate from job to job for survival.

The American fixation on the bucolic residential campus as the ultimate definition of education has produced our present impasse, where students expect a homey “safe space” monitored and secured by hovering parental proxies. European universities, in contrast, focus on education and are rarely concerned with providing luxurious amenities or supervising students’ social lives. Similarly, there are few European parallels to the rah-rah campus sports ethos in the U.S., which began with Ivy League football in the late nineteenth century.

Perhaps the most serious problem in American education is the blind funneling of all high-school students into a now diluted and weakened college prep program. It’s become a giant boondoggle that is doing more harm than good, given this stagnant job market. Vocational high school lost favor in the 1970s, when college-for-all became the new credo.  The educational reformer James Bryant Conant, who had promoted meritocracy in his tenure as president of Harvard (1933-53), opposed separate vocational facilities in his proposals for the “comprehensive high school.”

As a career teacher at art schools, which are vocational in admission and structure, I must protest the snobbery with which vocational training and trade schools are treated by the educational establishment in the U.S.  It is irresponsible for teachers not to be concerned about the future employment and lifetime welfare of their students.  Classes in business and entrepreneurship should be offered in every high school, especially in the inner city, and vocational tracks should be available to students who have no interest in college but want to start supporting themselves immediately after graduation.  We need to adapt elements of the German apprenticeship system, where industry contributes to specialized job training while students are still in school.

I applaud Bernie Sanders for putting the urgent issue of free public universities on the national agenda.  Let the private schools gorge themselves with cash—their pretentious, sticker-shock tuition rates, which only pampered trust-fund babies actually pay; the obscene multimillion-dollar salaries of their presidents; their mammoth endowments (fattening on Wall Street) that are unknown in Europe.  But before taxpayer money is invested again in the great cause of public education, American universities must embark on a program of radical austerity, stripping themselves of luxuries and booting three-quarters of their parasitic administrators out the door.  Every precious dollar must be devoted to the central mission of teaching and learning.

POSTSCRIPT:  I will be replying to questions from Salon readers in my future columns. Please feel free to write to me via my Salon mailbox (see below).