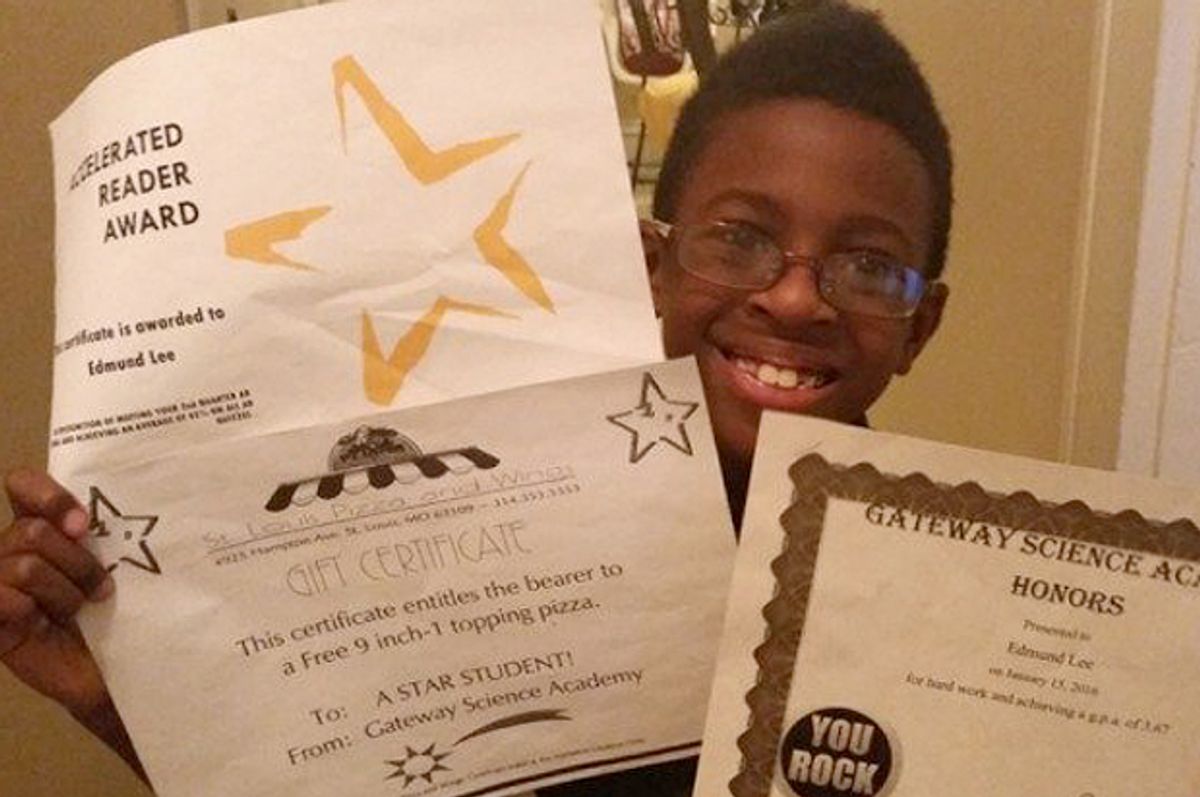 Edmund Lee is a third-grader at Gateway Science Academy in St. Louis, Missouri, a charter school he has attended since he was in kindergarten. Yet his family recently learned that he will no longer be able to attend the charter school because he is black.

Lee's family is moving to a new suburban school district, where a decades-old case law established by a 1980 U.S. Court of Appeals ruling does not allow black students to attend the schools in the city.

"When I read the guidelines I was in shock," Lee's mother LaShieka White told a local Fox affilliate. "I was crying."

School officials say they are unable to override the city policy. But the school's principal and staff have come out in support of the young boy and his family.

"To not see his face in the halls next year would be extremely sad," Lee's third grade teacher told local media. "The family is saying they want to stay. I don’t understand why they can't."

"My son Edmund is an awesome young man. He currently has a 3.83 GPA, and has above average testing scores in language arts, math, and science. Edmund is very loving and the first to extend a helping hand if a fellow student needs help," White writes in the petition.

"So imagine our shock when we found out Edmund would no longer be allowed to attend Gateway Science Academy because he is African-American," she continues.

As of Thursday morning, more than 20,000 people had signed the petition. Some staff members at the charter school have signed it as well.

After this article was published, the Missouri Department of Elementary and Secondary Education contacted Salon with a statement of clarification about the unusual case.

"This unfortunate situation is not due to state law or state regulations. It is a result of the student's change in residency from St. Louis City to a school district in St. Louis County," the department explained.

"Even if the family's new St. Louis County school district participated in the transfer program, the student would still not be able to transfer," it added. "This situation stems from the 1980 U.S. Court of Appeals ruling that the St. Louis City and County schools were maintaining segregated systems. In 1983, the schools reached a Desegregation Settlement Agreement allowing African American students to transfer into primarily white suburban school districts and for non-African American students to attend St. Louis schools. The goal was to try to balance the racial makeup of the city and county schools."

The department stressed, "There are no state laws or DESE regulations specifically preventing African American students from transferring schools."

(This post was corrected with the point of clarification from the Missouri Department of Elementary and Secondary Education, as well as to reflect the fact that this Missouri law does not pertain to just city charter schools, but to rather to all city schools.)