This is what political insanity looks like: The idea of a Clinton-Kasich "dream ticket" is rooted in fantasy and confusion over what the candidates stand for 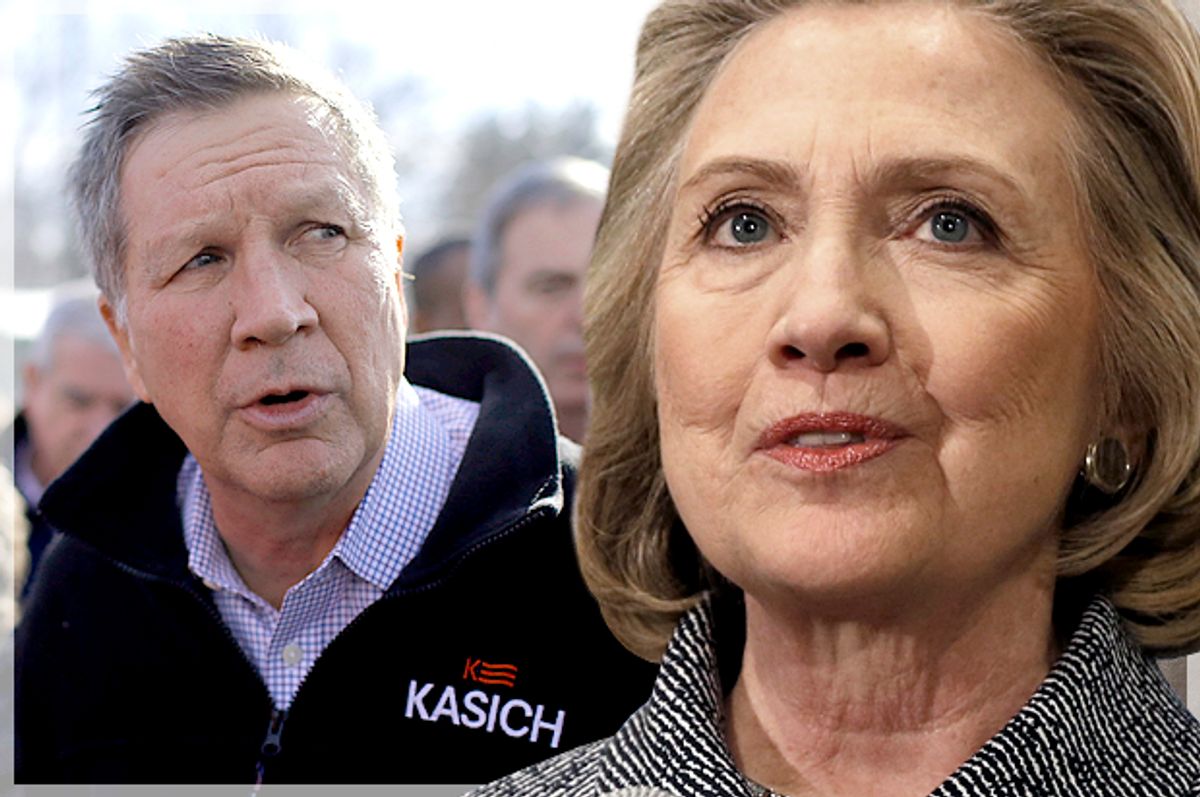 This should be obvious enough a proposition, but we're at that point in the election season where political nerds, as nerds are wont to do, are so caught up in speculating that basic common sense has flown out the window. You see it happen on any geek community where people's wool-gathering gets to the point where they're speculating that Rey is actually Kylo Ren's daughter or that Tyrion Lannister is going to turn into a dragon.

So perhaps it's not a surprise to see the same thing in political nerdery, such as this article where Sally Kohn at Daily Beast rolls out the notion that Clinton can pick Kasich as her running mate to create some kind of "moderate" ticket.

A "Clinton/Kasich team up makes a great deal of sense," she writes, arguing that establishment Republicans who are faced with a choice between Trump and Clinton will run into "the open arms of Hillary Clinton, most likely, especially if she picks Kasich as her running mate."

A lovely dream, but it's based on a shoddy assumption that's easy to disprove: That both Clinton and Kasich belong to this imaginary category of "moderates" that political pundits love to wax on about but who don't exist in the real world.

In the real world, Clinton is a strong liberal (or progressive, if you prefer) and Kasich is a hard-line conservative. While it's true that Clinton will reach across the aisle and work with Republicans to get stuff done (which Bernie Sanders also does), there's no reason to believe she would be comfortable handing over the roles of Senate president and next in line to the White House to someone so fundamentally opposed to her basic values.

"Kasich is no moderate," Kohn admits toward the end of her piece, but she still assumes that Kasich is moderate enough, between his distaste for Trump and "some economic moderate credentials,"  which is a legend that's grown up about him in the political press, mostly because he accepted the Medicaid expansion when most other Republican governors didn't. Kasich is good at sounding moderate in comparison to podium-pounders like Trump, but he isn't a moderate by any measure. Clinton is definitely smart enough not to let his pleasing aesthetics distract from his horrible political views.

Kasich's much-ballyhooed economic moderation is all smoke and mirrors. He's as viciously anti-union as Gov. Scott Walker of Wisconsin, but he didn't take as much political heat for it because his efforts were stymied in a way that Walker's weren't. He likes to hold himself out as fiscally responsible, evidenced by his closing of an $8 billion deficit, but it's all nonsense. The deficit didn't ever exist and Kasich just slashed a bunch of funding to school districts and local governments, forcing them to raise taxes and fees. Kasich also likes to brag about jobs growth in Ohio, but in reality, Ohio's job growth lags behind the national averages.

When he was in Congress in the '90s, Kasich was instrumental in rewriting welfare laws to cut needy people off food stamps. As governor, his state was allowed to expand food aid in response to their employment crisis, but Kasich refused that expansion, except in a few select areas where the majority of recipients were white.

All this isn't even touching on Kasich's frightening hatred of women's rights, which goes against  everything that Clinton has worked for her entire adult life.

Kohn argues that a Kasich pick makes sense because "Hillary Clinton is no progressive." That's certainly become a popular narrative in the contested primary race! But it's no mistake that proponents of this line focus on anything but Clinton's actual record, preferring to talk about some bills her husband signed (one of the most prominent being a crime bill that Sanders voted for but, oh irony, Clinton didn't) and stuff she's done outside of politics, like being paid handsomely to speak at Goldman Sachs events.

But if you look away from speaker's fees and husband history and at Clinton's actual record, it becomes clear that this "no progressive" line is political hyperbole that the facts disprove. During her time in the Senate, Clinton voted with Sanders 93 percent of the time, and the areas where they differ do not break conclusively toward the idea that he is more progressive. (For instance, Clinton fought for immigration reform that Sanders helped derail, a point that the Clinton campaign hammered repeatedly in the Nevada campaign.) Clinton was one of the most liberal members of the Senate, in the top 15 percent, which makes her voting record more liberal than Barack Obama's. On the Issues rates Clinton a "hard core liberal," putting her in the same range as Elizabeth Warren and Bernie Sanders.

Even her much-obsessed-over Iraq War authorization vote, upon investigation, falls apart as evidence against her liberalism. As Fred Kaplan at Slate explained, Clinton was outspoken in the Senate over her concerns about rushing to judgment about Saddam Hussein having weapons of mass destruction. She argued "for complete, unlimited inspections with cooperation expected and demanded" from Iraq and only going to war if he resisted and with the backing of the United Nations.

"I take the president at his word that he will try hard to pass a United Nations resolution and seek to avoid war, if possible," she said. One can argue if she was foolish to believe President Bush when he said he'd let the weapons inspectors finish their job, but that she supported thorough investigations instead of rushing to war is a matter of public record.

Pairing off Clinton and Kasich as some kind of moderate "dream team" may seem like a harmless bit of spitballing, but this kind of rhetoric is dangerously misleading. Have we already forgotten what happened in 2000? Similarly false narratives erasing the substantive differences between George W. Bush and Al Gore, goosed by the irresponsible Ralph Nader campaign, became the "common wisdom" back then. It helped make what should have been an easy win for Gore turn into a squeaker of an election, getting Bush close enough that the Supreme Court could boost him into the White House.

Surely we remember how swiftly Bush proved all the pundits and all their "moderate" fantasies wrong, don't we?

The differences between Democrats and Republicans aren't imaginary, minor or small enough to take seriously the idea of a combined ticket. They weren't in 2000 and they aren't in 2016, even if the circus-like atmosphere of the presidential primary might lull one into thinking otherwise.