"Bridge of Spies" is my grandfather's story

I always knew that James Donovan was someone special. Now, thanks to Steven Spielberg & Tom Hanks, everyone knows 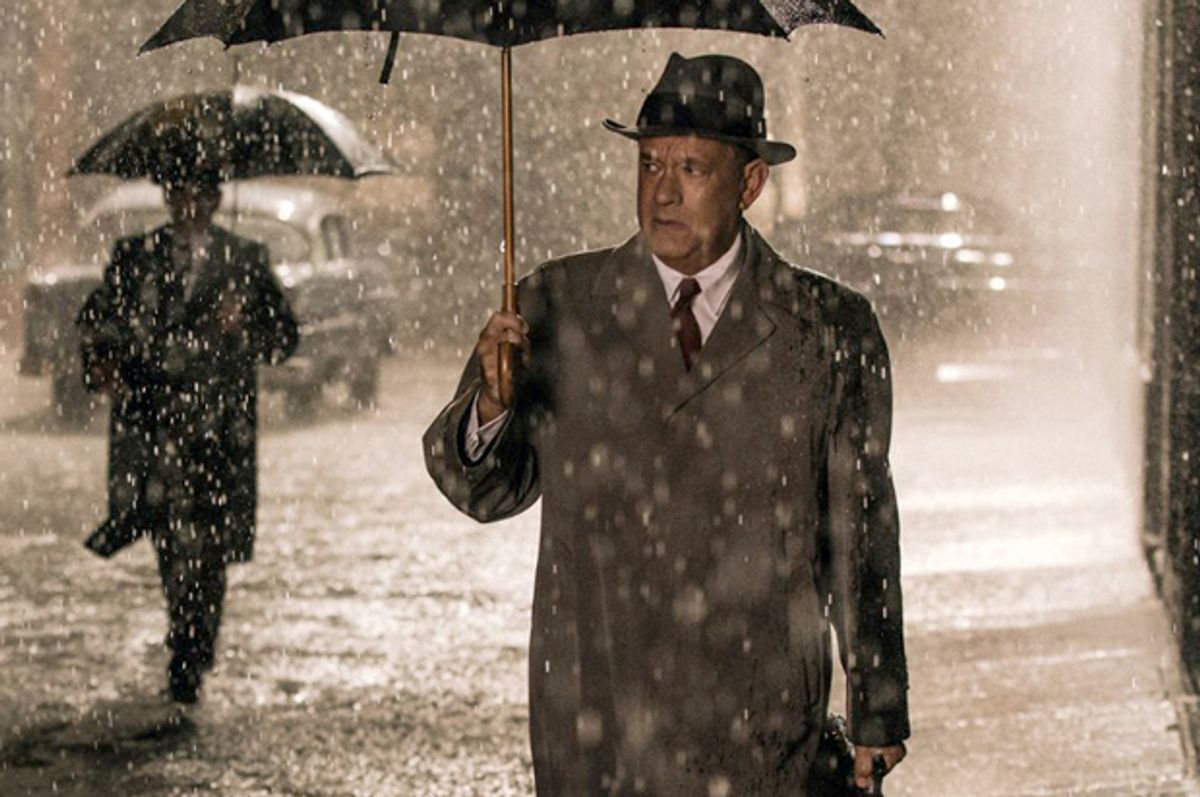 I once heard director Sydney Pollack speak about the importance of the passage of time for artists to have enough perspective and distance from a subject to create real art. In 1964, my grandfather, James B. Donovan, published a memoir called “Strangers on a Bridge,” in which he recounted in diary format his legal defense of Russian spy Col. Rudolf Abel and his negotiations with the Soviet Union for the exchange of Abel for the captured American U2 pilot Francis Gary Powers. At that time, the book was to have become a movie starring Gregory Peck. But that movie never materialized. Cold War tensions were too high and the political climate too strained, so the studio decided not to make it. With the significant passage of time, though, has come a movie that has not only brought his story to the world, but is also a piece of timeless, classic art: Steven Spielberg’s “Bridge of Spies,” starring Tom Hanks as my grandfather, depicts the same historical events shared firsthand in Jim Donovan’s book. It was largely because of the release of this beautifully crafted film that I was successful in getting the book republished, giving the storytelling in the film some authentic historical context.

Growing up, I always knew that my grandfather was “someone.” My paternal grandfather had died before my parents married and James Donovan – my maternal grandfather – died when I was only 3, so I have very little, if any, memory of him. The grandfather I knew was through the pictures and books in the breakfront of my parents’ living room, through his medals encased in a wooden box with a glass display case, and through the images of his den that are etched in my memory. I remember his den (and the apartment in which my mother was raised) vividly – a cozy oasis of dark wood and leather, a warm rainbow of midnight blue, mahogany and hunter green forming a cozy sanctuary for learning, teaching, reflecting and sharing ideas. I looked at his picture daily, his cherubic grin, shaking hands with President Kennedy, fishing with Fidel Castro, and at his kind gaze in the portrait hanging in my grandmother’s living room on Prospect Park West in Brooklyn. I heard about him from the man with a front row seat to history – my grandfather’s driver and a loving member of our family, Aston Taylor. Most of all, I heard about him from my grandmother, who spoke so proudly of his achievements, and for years of how Hollywood needed to tell his story. Sadly, she is not here to enjoy these exciting moments celebrating my grandfather’s life story with us. She would want to thank Mr. Spielberg herself.

I grew up in these shadows of history, not fully realizing the gravity of what my grandfather had accomplished until I began to write my admissions essay for college, the subject of which was my role models. Needless to say, he was the inspiration for my chosen topic. He was a Harvard Law graduate, general counsel for the OSS in WWII, associate prosecutor at the Nuremberg Trials; and following the historic Abel-Powers exchange, President Kennedy sent him to Cuba, where he successfully negotiated the release of 1,100 Bay of Pigs prisoners (9,700 people’s freedom was ultimately secured as the direct result of those negotiations). He also ran for U.S. Senate, was president of the New York Board of Education during busing and integration, and was president of Pratt Institute during the late '60s student uprisings. He accomplished all of this, yet died at 53 years old in 1970.

Healthy role models are vital for society, particularly for the next generation and for those who aren’t as fortunate as I to have grown up in a loving, supportive home. My grandfather’s life embodies so many things that are worth emulating: a commitment to excellence and craft, an ongoing thirst for learning, a strong work ethic, an ability to welcome and rise to challenges, an appreciation of the values of courage, tenacity and, most of all, standing up for one’s beliefs at any cost. These were the ideals I was raised with and that I try to emulate in my own life.

While we lost him way too soon, I have held onto his ideals throughout my life, to help me reach for the stars, hopefully inspiring others to do the same. With the telling of his story, I hope that people will not only be moved to action of their own, but also enriched by the teachable moments of history. It is these moments that help to provide a hopeful future for our children -- the next generation of role models -- to cast their own formidable shadows upon all future generations.  As we celebrate my grandfather’s centennial birthday this year, the formidable shadow of James Donovan’s contributions has become a cultural touchstone. Like a great piece of art, the realization of his life in film has proved to be worth the wait. What an extraordinary way to celebrate my grandfather’s centennial birthday on Feb. 29.  Oscar or no Oscar, “Bridge of Spies” wins by standing the test of time.

Beth Amorosi is a marketing communications strategist and lives in New York City.  She has also founded the Donovan Institute, a nonprofit dedicated to the advancement of diplomacy and the art of negotiation.  For additional information, please visit www.jamesbdonovan.com.