GOP falls into Obama's trap: Vetting a Republican for the Supreme Court was crafty — and confirmed the right cares about power above country 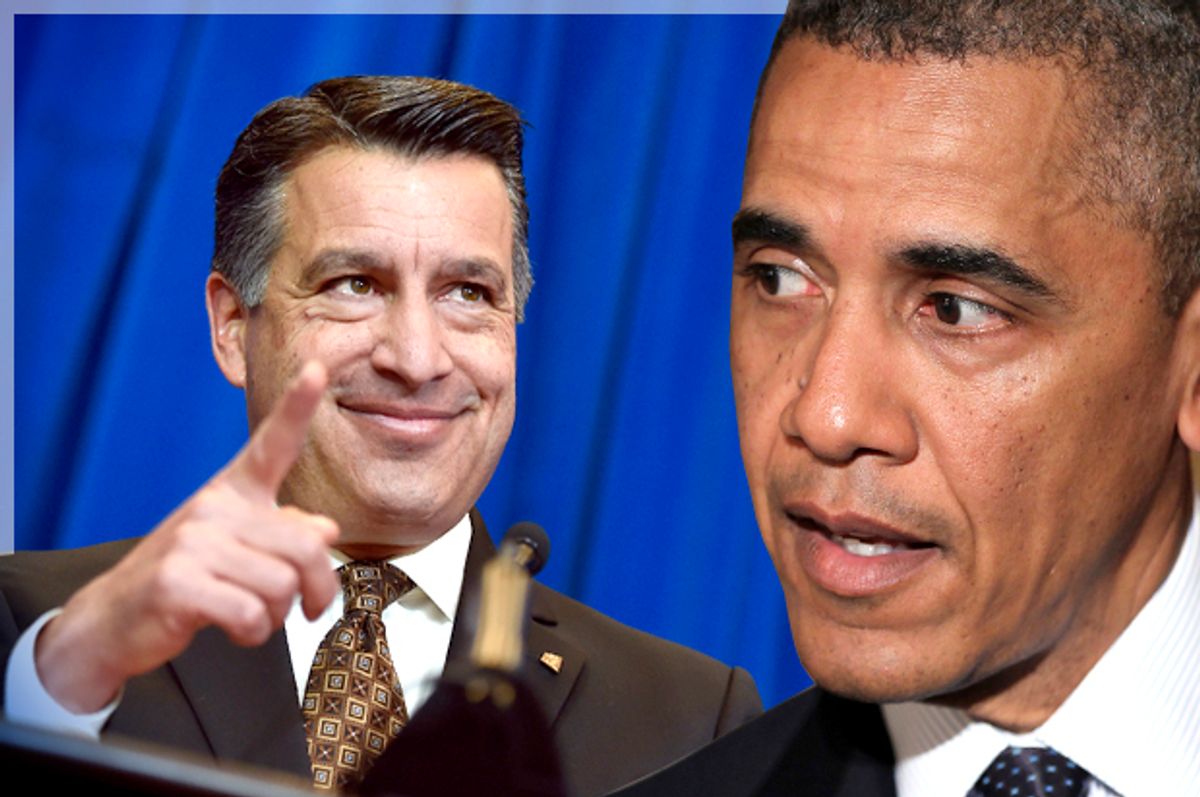 Ever since Justice Antonin Scalia died, President Barack Obama has been handling the Republican freakout over filling his seat on the Supreme Court about as well as he can. While Republicans are climbing over each other to declare that they will never confirm an Obama nominee under any circumstances, Obama has mostly held back. He gave one news conference, ostensibly about other issues, where he struck exactly the right pose of chuckling paternal amusement at the Republicans' childish behavior and making it clear that he will not stop being president just because they want him to.

But news leaked that Obama was vetting Brian Sandoval, a Republican governor of Nevada, for the job. This was troubling news because while Sandoval is an experienced judge and a moderate on issues like abortion and healthcare, he was not anyone a Democrat would have wanted on the court. Thankfully for Democrats, Sandoval withdrew his name from consideration on Thursday.

Moderate Republicans can be fine as judges on lower courts, but history shows they are a disaster on the Supreme Court. Sandra Day O'Connor and Anthony Kennedy, for instance, have ruled with the liberals on issues like abortion in the past, but they were also responsible for one of the worst decisions in American history, Bush v. Gore, a decision so bad that the justices denied that it should be used as precedent. Considering the disaster that was the Bush administration, that Obama should even consider putting  the country at similar risk again seemed wildly irresponsible.

That said, there's good reason to think that Obama was playing a game here. The source for the Sandoval story, according to the Washington Post, is "two people familiar with the process." It's entirely possible, likely even, that the Obama administration leaked this story not because they were seriously considering Sandoval but to gauge how Republicans in the Senate react to this news. Sandoval's quick withdrawal of his name only adds to the suspicion that he was never a serious contender.

So far, Senate Majority Leader Mitch McConnell has been obstinate in his refusal to even consider an Obama nominee and the Senate Judiciary Committee refuses to even hold a hearing. The reason for this is plain to anyone with two brain cells to rub together: The court is currently in a 4-4 tie between liberals and conservatives, and anyone Obama appoints is likely to tip the balance in favor of the liberals.

But the excuse for the obstruction is that the Republicans discovered a new rule, pulled directly from their asses, that says that a duly elected president's constitutional duty to nominate judges should be suspended in his last year of office. Expect that they will also discover, during President Hillary Clinton's first year, that suspension of duties expands to the first year of office and every year thereafter because reasons.

This move is a risky one for Republicans, because acting like a bunch of children who refuse to follow the rules because they don't like them could hurt them with the voters. Losing seats in Congress and even the White House might be a risk they're willing to take to keep the Supreme Court from shifting to the left, because, despite their claims of opposition to "judicial activism," conservatives have become highly dependent on the conservative majority in the Supreme Court to block and reverse progress.

Usually, I'm skeptical of political theorizing about Obama playing 11 dimensional chess — most conspiracy theories assume that human beings are more organized and crafty than they actually are — but in this case, the game Obama seems to be playing here isn't that complex. Floating Sandoval's name, if my theory is correct, was little more than an information-gathering exercise and not really a serious effort to trick the Republicans into tripping over their own feet.

If so, it's already working.  Ali Weinberg of ABC News reports that McConnell has already rejected the possibility of Sandoval and apparently any Republican nominee to the bench, before Sandoval even had a chance to drop out. Obviously, it would have been nice if McConnell had been tricked into softening, but at least now the White House has more information than they did before. And, with Sandoval's swift exit from the pool, they got to establish the notion that they are willing to rise above politics without actually having to prove it by nominating a Republican.

Any moves Obama makes now will have to be based on the knowledge that the Republicans really are serious about this, and they  have every intention of sticking to their newly discovered belief (to be abandoned the second a Republican is in the White House) that the constitutional duties of the president to nominate a Supreme Court justice don't count if it's your last year in office.

Of course, that leaves the president in a pickle. The Senate's choice to refuse to hold hearings is a bit of mad genius. No hearings means no images of a nominee being questioned, no stories about what the senators did or didn't ask the nominee, no chance for the Democrats to get their questions on the record, and no chance for a nominee to highlight the gulf between his/her reasonableness and the Republicans' craziness. Holding the line until everyone gets bored and moves on is a crafty way to get this story out of the news, you have to give them that.

Floating potential names, whether through anonymous leaks or not, might be the only thing that Obama can do in order to keep this story in the headlines. Because the critical thing here is maximizing the blowback on the Republicans and giving Clinton a boost into the White House. Under the circumstances, maybe the best play for Obama is to keep "vetting" random people for McConnell to angrily reject and then announce a nomination in October, to maximize the electoral damage to Republicans. Doing that is a bit of dirty pool, but Republicans brought this on themselves with their refusal to do even their basic duties as elected officials.