The gun industry won: Republicans defeated the anti-gun crowd by shouting them down with temper tantrums and sheer nonsense

The gun lobby won by being so unreasonable that discourse fell apart, a strategy conservatives adopted 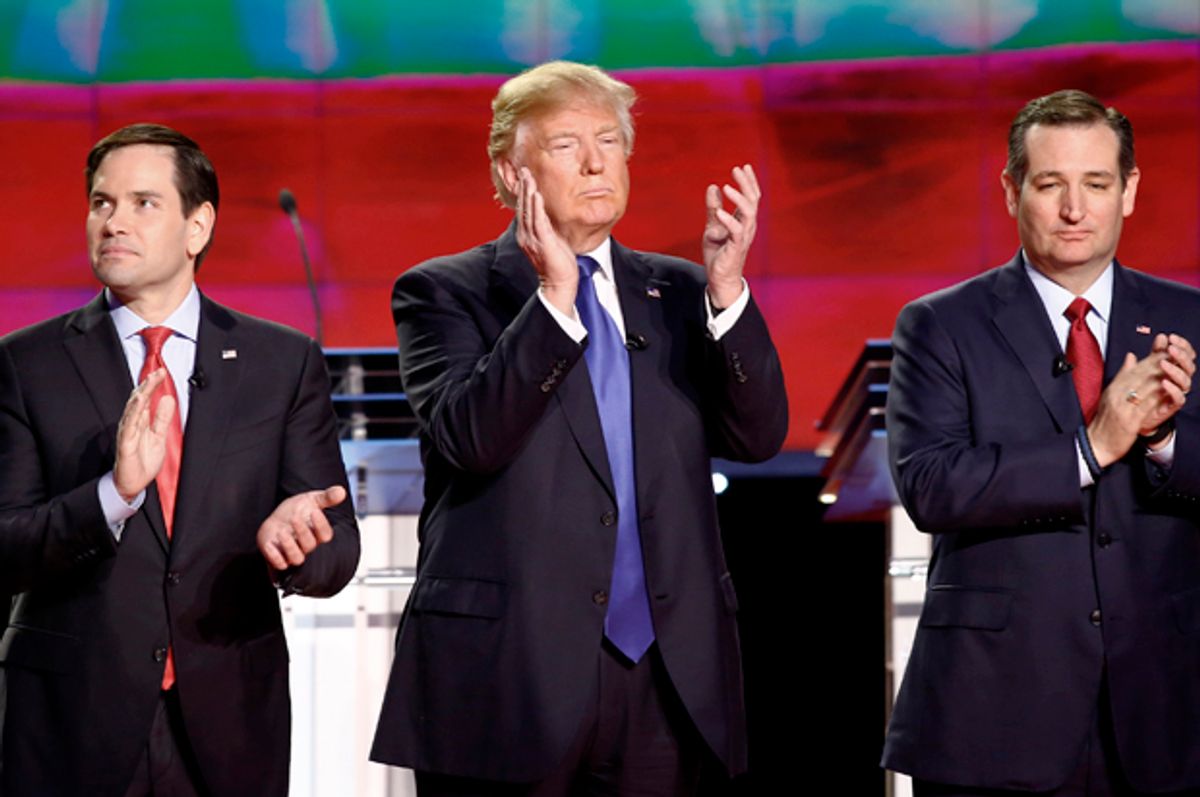 This week, there were two mass shootings, one in Michigan on Saturday and another in Kansas on Thursday. The media coverage after each has fallen into a depressingly predictable pattern: First, check if the shooter was Muslim. If not, then there will be a few days of coverage turning up details of the killer's past. If there's a provocative detail — such as the Michigan shooter picking up Uber fares in between bouts of killing — coverage might extend to a week, but most of the time, it peters out pretty quickly as most media outlets turn to more interesting things, like who Donald Trump is insulting today.

And if the news coverage is paltry, the opinion coverage will be even thinner. A few opinion journalists might try a half-hearted piece about guns or pondering the anger that drives these events, but most of us can't even be bothered. Certainly, after the Uber shooting, I briefly considered whether I should respond and felt a troubling "Eh, it won't make a difference" response. No one will even read it, probably.

In other words, unless the shooter is a Muslim and the incident can be plugged into the "Terrorism?!" narrative, mass shootings are covered like the weather: There's an obligatory amount of news coverage, so readers and viewers are apprised of what's going on, but it doesn't really mean anything. Mass shootings, like tornados or flash floods, are sad events and you feel sorry for the victims, but they are regarded as just a thing that happens that we have no real control over.

This indifferent response reaches beyond just the media. Despite the horrific loss of life to random violence this week, there was not a single mention of shootings or guns during Thursday's Republican debate. And you can hardly blame the moderators for not bothering, as the response the candidates give will be a robotic, insincere call to pray for the victims accompanied by a refusal to treat these incidents as any other than weather events that come out of the sky and cannot be prevented by mere mortals. Perhaps one candidate will shill for the gun industry, masturbating to the fantasy of the gun-toting civilian heroically stopping the gunman, but any other possible form of prevention will be ignored.

But of course, mass shooters are not the weather. They are people, almost all men, making choices. They are effective because they have access to high grade weaponry that makes taking multiple lives in rapid succession not just possible, but easy. There are obvious steps that could be taken to prevent these crimes, but few can muster the energy anymore to bring those obvious steps up.

The gun industry has won, and not just on a legislative level. They have won on a cultural level, inducing a learned helplessness in the media and the public by making it clear that any attempt to even start a conversation about gun control will be swiftly shut down by a right-wing temper tantrum that is as irrational as it is loud. Even the mildest suggestion to make it ever so slightly harder for a murderous madman to get a gun is immediately regarded as nothing more than the jackboots kicking down your door to steal your gun, which is both your penis and your mother's milk, leaving you alone and bereft in the world with nothing left to live for. Why are liberals trying to steal your soul? Is nothing sacred?!

Yes, the reaction is crazy, but that's why it's so effective. You can't argue with crazy. Eventually, you give up even trying.

The gun industry's strategy of refusing to even discuss this and throwing a wall of crazy at anyone who tries has, in a lot of ways, really set the tone for how conservatives deal with an increasing number of issues. They can't win the arguments on the merits, so they will win the argument by exhausting the opposition by refusing to talk about anything but gibberish. The tactic works, so of course it's exploding in every direction on the right.

Climate change? It's a hoax created by tree huggers out to steal your car! End of discussion.

Reproductive rights? The Republicans have drafted a strategy where there are so many defunding efforts aimed at Planned Parenthood and so many ridiculous new restrictions on abortion that it feels pointless for journalists to even cover the story anymore. Another day, another attacks on women's rights. Yawn. What's the point of even clicking this story? And if try to mount an effort to debate the issue, you get hit with the wall of crazy, with allegations flying about "baby parts" and other such nonsense. It's all carefully designed to make you realize there is no way to have a meaningful discussion with these people, so you give up.

And obviously, Republicans in Congress have adopted this as a legislative strategy. There is very little effort to actually govern, which requires  compromising with Democrats. Instead, there's an across-the-board refusal to discuss anything, and any efforts to change that are met with a wall of "Benghazi!" and "baby parts!" You quickly conclude that trying to discuss anything with Republicans will be as fruitful as trying to talk to a pinball machine that only responds with clanging and dinging.

Now this strategy is being employed, quite effectively, with stonewalling Obama on a Supreme Court nomination. Refuse to discuss it, and any effort to start that discussion will be met with objections that are such obvious nonsense — this made-up "rule" about your last year in office not counting — that the only purpose is to make it clear that any efforts at discourse are wasted breath.

The strategy, which has been honed to perfection by the gun industry, is as ruthlessly effective as it is evil. We won't ever get anything done on climate change or guns. Abortion access is rapidly disappearing. Obama probably won't get a nominee confirmed. Conservatives will nope our country into the grave.

The only real solace is watching this strategy come back to bite Republicans in the form of Donald Trump. Establishment Republicans keep trying to reason with Trump supporters, pointing out that he's not really a conservative and that he's a clown and that he's probably unelectable. But they keep getting hit with a wall of nope, backed by enough crazy to make it clear that there's no reasoning with these people.

It appears the students have become the masters. Too bad the rest of us are having to pay such a steep price for conservative obstinance, with some of us, as these mass shootings show, even paying with our lives.