Three bullies in a locker room: Rubio and Cruz came out swinging, but Trump's still king of the swirlies 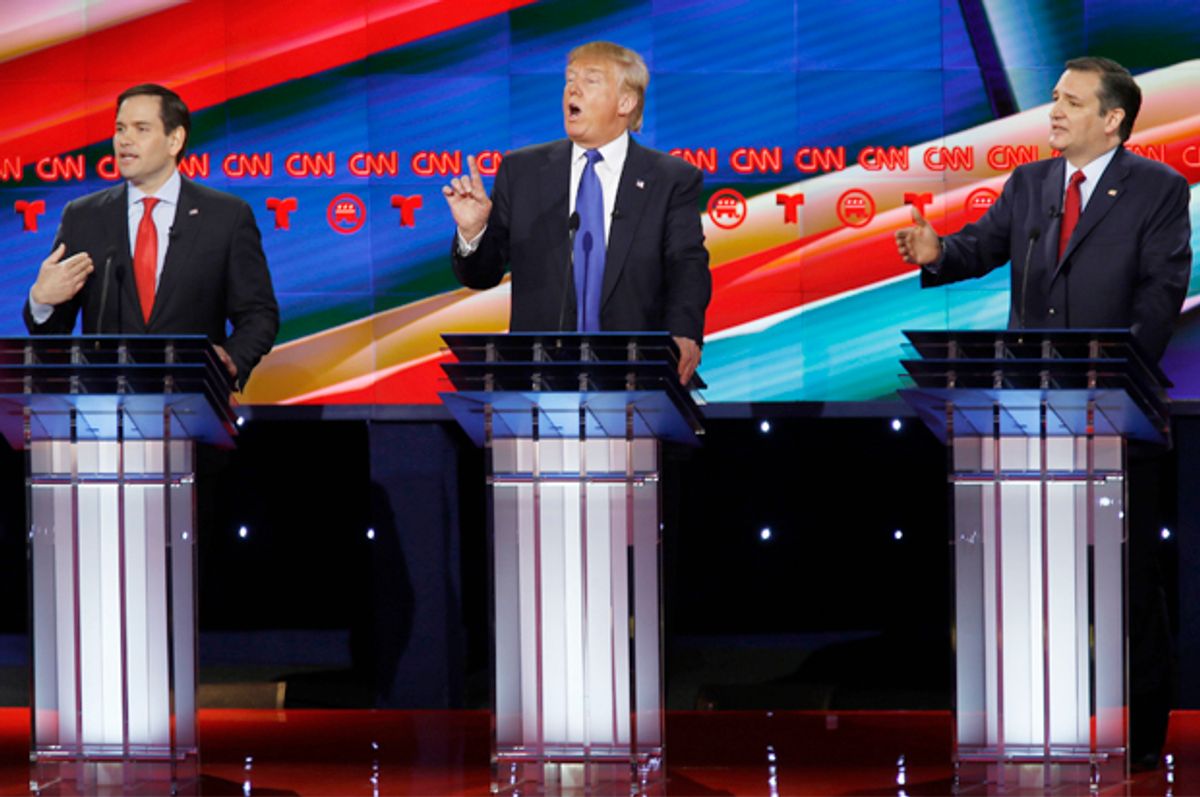 The first 2016 Republican debate without Governor Jeb Bush—who dropped out of the race shortly after the South Carolina primary—was characterized, naturally, by fewer gaffes and more yelling. There were still some head-scratching remarks, of course—Ben Carson conclude an answer with “the fruit salad of their life,” a phrase that no one knows the meaning of, and Donald Trump invented the word “bigly” to describe something large, maybe because saying “yugely” would have made him self-conscious. But really, what marked the night was just “[unintelligible yelling],” as Trump, Senator Marco Rubio, and Senator Ted Cruz sniped at each other in the least productive way possible for the majority of the evening.

The three men took up the three center podiums, and as a result, CNN could crop out Carson and Governor John Kasich—those two troublesome hangers-on—right out of the frame as the other three men jabbed fingers at each other, waved around accusations with upturned palms, shrugged and stuck their chins in the air, and most of all, shouted. A 30-second segment of the debate has already become its own bite-size, shareable video, and it’s a damning ad spot against the Republican party, if someone’s prepared to capitalize on it. This is from the last third of the debate, when Cruz was trying to respond to an attack from Trump, and in infuriating iterations of the “patient-but-disappointed-dad” approach, keeps waiting for Trump to give him enough respect to speak. It doesn’t happen. The result is a whole segment of overlapping dialogue that is just insults and bitchery, a political dick-measuring contest that wasn’t even that subtle.

The tone recalled locker-room banter—that kind of aggressive play-fighting that will either turn sexual or violent depending on what kind of porno you’re watching. The three were high school kids trading taunts. Trump is the rich kid who decides to be nice when it’s convenient, Cruz is the smart jock who is desperate to be seen as tough, and Rubio thinks that by being in the locker room he is one of the big boys, participating in the same argument. (It was rather telling, earlier in the debate, that Rubio used the same taunt Governor Chris Christie used on him to mock Trump for repeating himself; Rubio is a classic omega bully, the kid that finds power by using what hurt him to hurt others.)

The whole thing was a train wreck, helped not at all by CNN anchor Wolf Blitzer’s rather passive moderating, and a debate format that allowed any candidate who had been “attacked” a 30-second chance to respond. It was purely ratings juice, an opportunity to introduce as many moments of fake-polite posturing as possible. Naturally, following the debate, CNN interviewed Trump not once but twice.

It may have appeared that Rubio won the evening, based on his grinning, boy-scout assurance of victory for having done the right thing by coming prepared to the bear fight. He countered Trump on a number of reasonable issues, all to sound even less reasonable himself, of course, but that’s just the liberal in me talking. Cruz and Rubio both made it their business to make Trump look as liberal as possible, and so played up his earlier support of Planned Parenthood, his policy flip-flopping, and his donations to Democrats running for office. The political establishment has made already produced a lot of “Rubio won” articles, hoping to see a surge in Super Tuesday.

But don’t be fooled; this was Trump’s victory lap. The candidate—who defied gravity with an arrogant tilt to his head that he somehow sustained all evening—threaded the needle of political litmus tests in an independently minded way that was so disdainful of the spin of political narrative that it was clear why he was winning against Rubio and Cruz. His willingness to be flexible coupled with his obviously manipulable opinions—based on shifting vagaries of conventional wisdom—might be laudable characteristics in a politician if he didn’t want to deport 11 million people, ban Muslims, and start a trade war with Mexico when that country refuses, naturally, to pay for a border wall that he thinks should exist.

Trump has the con-man game of snake oil selling down so hard that nothing can touch him at this point; it’s unfortunate it took Rubio and Cruz this long to target him, but also, not that unfortunate at all, because they would both be terrible presidents, too. President Reagan was the Teflon president; Trump is a katamari. In the Japanese video game “Katamari Damacy,” the player was a ball of gravity that slowly rolled around the landscape, attracting more and more objects to themselves, until the entire landscape, terrain, ocean, and all, clung to the player. This is not unlike what Trump has done throughout this election. In advance of Super Tuesday, the media and the GOP establishment are panicking to discover that Trump is rolling through primary season like a late-level katamari, picking up more and more states and followers as he blunders towards the GOP’s convention. Reagan’s advantage was that insults couldn’t touch him; Trump’s is that he somehow uses insults to make himself bigger and more daunting—using the vitriol of some to enhance his appeal for others.

Last night’s debate was a kind of hilarious attempt on the parts of Rubio and Cruz to pretend that Trump wasn't barreling towards success without a care in the world, sucking up racist voters all over the country. Pointing out contradictions and mistakes got them nowhere. When Maria Celeste, a Telemundo anchor—and, incidentally, the only debate moderator to push the candidates at all—asked Trump a couple of questions about his attitudes towards Latino voters in America, Trump first said “I don’t believe anything Telemundo says,” and then followed up, 60 seconds later, with “I love them.” The utter inanity of it—the utterly implausible dismissiveness of it—should create outrage. With Trump, it is just an indication that he contains multitudes. Does he hate Telemundo or love it? It’s both; it’s neither. Trump is the Schrödinger’s cat of candidates, where contradictions are simultaneously unknown and true, and it all works to further the fundamental laws of the universe. Money talks.