We tried to figure out what the hell Ben Carson is talking about: His weirdest statements, including the "fruit salad of life," explained

An attempt to make sense of Carson's most puzzling statements, so you don't have to 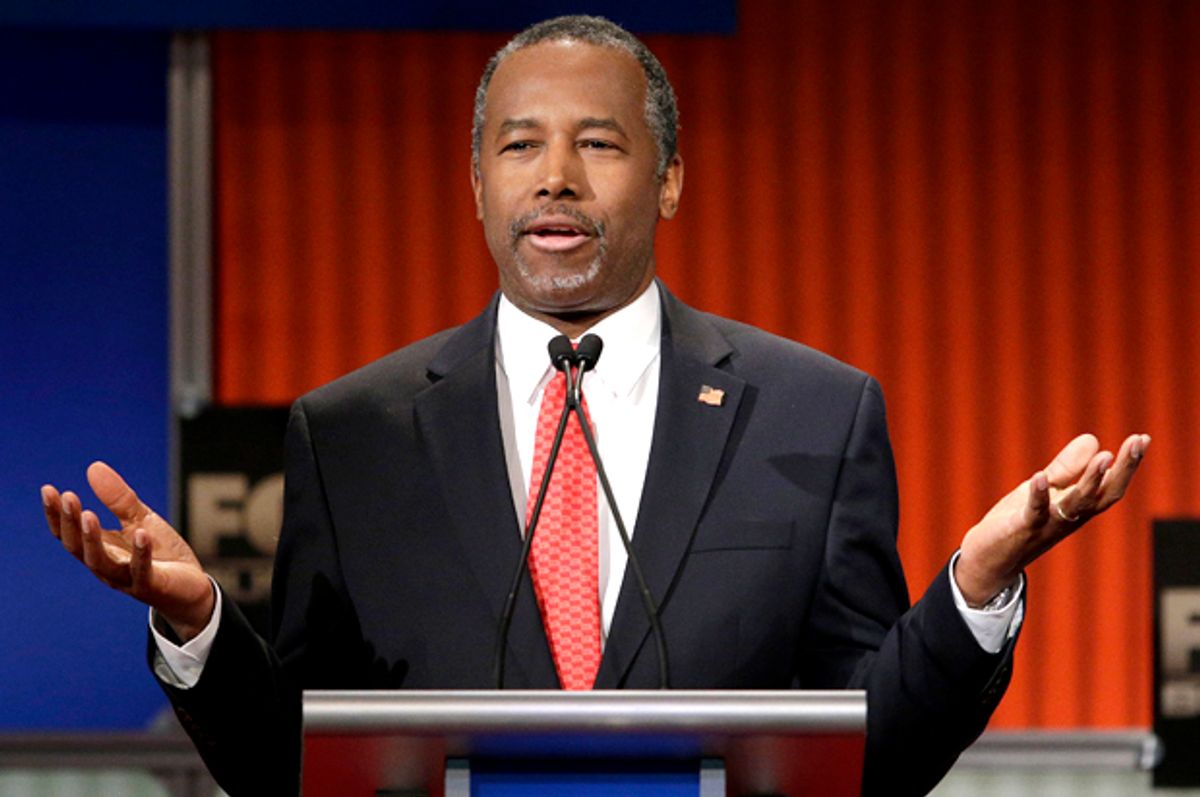 In an attempt to unravel Ben Carson's strangest statements, Salon dove deeper into the mind of Carson than anyone really should. Here's our best effort to explain what the GOP presidential contender really meant:

1. On choosing a Supreme Court nominee: "The fruit salad of their life is what I would look at."

This is a clear case of Dr. Carson getting a bad rap from an inept mainstream media with no sense of historical context. We imagine that in Carson's mind, he was simply adopting a presidential tone by harkening back to the (questionably accurate) tradition of fruit salad in American politics.

Here's a little revisionist history lesson (that we kinda wish was actual reality) that Carson might have schooled us with if we'd only given him the chance:

"Though historians have traced this thread all the way back to the fruit salad shared by pilgrims and Native Americans at the first Thanksgiving, the first president to invoke the delicacy was James Monroe. In 1821, Monroe issued a controversial executive order that banned cantaloupe from inclusion in fruit salad and described the melon as 'fucking gross.' The order (later overshadowed by the more famous Monroe Doctrine) was subsequently overturned by Andrew Jackson.

Other notable historical examples include William Jennings Bryan's famous 'crucified upon a bowl of fruit salad' speech and Dwight Eisenhower's farewell address, in which he warned of the growing influence of the military-industrial and fruit salad lobbies."

2. "Can somebody attack me please?"

Like a world-class judoka or a counter puncher à la Sugar Ray Robinson, Dr. Carson is looking to use his opponents' momentum to his advantage. Carson lures in would-be attackers with his cucumber-cool facade only to strike back with his sharp wit. Admittedly, the strategy is less effective when no one ever attacks you because you're polling in single digits.

3. On the American people: "Many of them are stupid."

Well, Ben Carson did lead in the polls for the GOP presidential nomination at one point...

4. "My own personal theory is that Joseph built the pyramids in order to store grain."

Another case of the lamestream media making a mountain out of a molehill. Dr. Carson clearly misspoke. Simply replace "Joseph" with "Egyptians" and "grain" with "the mummified remains of dead pharaohs" and this quote makes total sense. Just an innocent slip of the tongue.

5. "Marriage is between a man and a woman. It's a well-established, fundamental pillar of society, and no group, be they gays, be they NAMBLA, be they people who believe in bestiality... It doesn't matter what they are, they don't get to change the definition."

This is a brilliant piece of diversionary rhetoric. Dr. Carson didn't have any good evidence to back up his statement, felt himself going off the rails, and immediately brought up NAMBLA.

Be honest: did you really hear anything Carson said after NAMBLA? Or were you too busy thinking, "Wait, is that the North American Man/Boy Love Association he's talking about? That NAMBLA?" Crisis averted. Score one for the good doctor.

6. "Every signer of the Declaration of Independence had no federal elected office experience."

Because the federal government did not yet exist in 1776. Boom. Checkmate. Zero pinocchios.

7. On new AP U.S. history class: "Most people, when they finish that course, they'd be ready to go sign up for ISIS."

Let's give Carson the benefit of the doubt and assume that "ISIS" was a misquote. He may have actually been referring to "ISUS," the Institute for the Study of the United States, a think tank that doesn't exist only because the busy Dr. Carson hasn't gotten around to founding it yet.

8. "There may be a war on what's inside of women, but there is no war on women in this country."

Ok, this is getting more difficult... But have you read about mandatory transvaginal ultrasounds? Sounds like a war on what's inside women to me.

9. "It's interesting that we sit around and call other ancient civilizations heathen because of human sacrifice, but aren't we actually guilty of the same thing?

10. "ObamaCare is really, I think, the worst thing that has happened in this nation since slavery."