I thought I could reason with Antonin Scalia: A more naive young fool never drew breath

I clerked for Scalia, certain he prized reason. From our leather chairs, we never saw the lives his rulings gutted 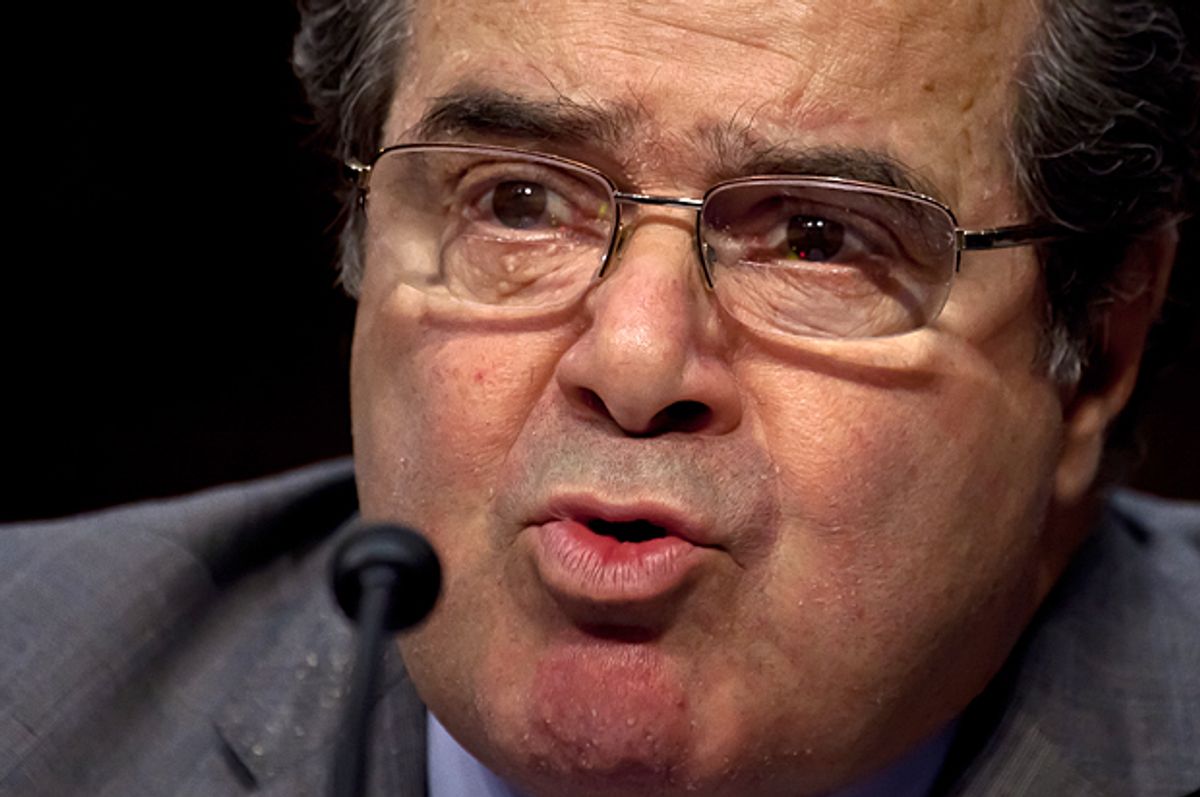 In the two weeks since his death, many have spoken about Antonin Scalia’s undeniable impact on American law.  As attention shifts to filling the vacancy he has left on the Supreme Court, I would like instead to talk about his less appreciated impact on contemporary physics. But first, a bit of background.

Antonin Scalia generally detested science. It threatened everything he believed in. He refused to join a recent Supreme Court opinion about DNA testing because it presented the details of textbook molecular biology as fact. He could not join because he did not know such things to be true, he said. (On the other hand, he knew all about the eighteenth century. History books were trustworthy; science books were not.) Scientists should be listened to only if they supported conservative causes, for example dubious studies purporting to demonstrate that same-sex parenting is harmful to children. Scientists were also good if they helped create technologies he liked, such as oil drills and deadly weapons.

His own weapon was the poison-barbed word, and the battleground was what he once labeled the Kulturkampf, the culture war. The enemy took many forms. Women’s rights. Racial justice. Economic equality. Environmental protection. The “homosexual agenda,” as he called it. Intellectuals and universities. The questioning of authority and privilege. Ambiguity. Foreignness. Social change. Climate research. The modern world, in all its beauty and complexity and fragility.

Most of all, the enemy was to be found in judges who believe decency and compassion are central to their jobs, not weaknesses to be extinguished. Who refuse to dehumanize people and treat them as pawns in some Manichean struggle of good versus evil, us versus them. Who decline to make their intelligence and verbal gifts into instruments of cruelty and persecution and infinite scorn.

I worked for him early in his tenure on the Supreme Court. He had visited my law school when I was a student, and I was smitten by his warmth and humor and sheer intellectual vibrancy. When I applied for a clerkship at the Court, my hero Justice Brennan quickly filled all his positions, so Scalia became my first choice. He offered me a job and I thought I’d won the lottery. I knew we differed politically, but he prized reason and I would help him be reasonable. A more naive young fool never drew breath.

I can attest to the many nice things people have said about the Justice. He was erudite and frighteningly smart. He said what he thought, not what was expedient. He was generous to friends and family. He loved his clerks and helped them get dream jobs. And we returned the favor by not thinking about what we were doing, then or afterward. What I took for the pursuit of reason in those chambers was in fact the manufacture of verbal munitions, to be deployed against civilian populations. From the comfort of our leather chairs, we never saw the victims.

Anyway, about his contribution to physics. I am close to one of the victims of his operation, a transgender woman named Mischa Haider, whom I got to know during the course of her work on a Ph.D. in physics at Harvard. She’s an extraordinary polymath — gifted violinist, writer and novelist; fluent speaker of a half-dozen languages; math genius. And physicist. Her intellect would have made our brilliant Justice want to hide his head in a bag, to borrow his charming words from last year’s marriage equality ruling. Those who have any doubt about trans mothers should meet Mischa’s children.

Since coming out as trans a few years ago, this remarkable woman has suffered a debilitating depression. Partly from the transphobia she encounters daily at the allegedly enlightened Harvard; from the constant stares in public; from the indignity of worrying about things the rest of us take for granted, like walking in the street or using a public bathroom without fear of taunts or violence, or taking her children to the park without fear of being humiliated in front of them.  And from the pain of rejection by family and former friends who, despite her prodigious achievements, are somehow ashamed to be associated with her.

Beyond all that, it’s her knowledge of what the “culture war” means for trans women across the country, women who are shunned by their families, who are often unable to get jobs and therefore live in poverty, who face shocking levels of assault and murder (2015 was a record year), who attempt suicide at a rate greater than 40 percent. Who are generally excluded from the protection of antidiscrimination laws. Who, on the contrary, are at this moment the subject of dozens of pending pieces of transphobic legislation around the country, such as bills to stigmatize trans children by forcing them to use separate locker rooms at school or to jail trans women for using public bathrooms that match their identity. The drumbeat of organized hatred, calling to mind yellow stars and separate drinking fountains and worse, makes my friend feel like a nonperson, unwelcome in her own country. All this, for the crime of not matching someone else’s idea of how women are supposed to look.

She’s decided to leave academic physics after finishing the doctorate. She has become too absorbed in the struggle for equality – for being accorded the most basic human dignity – to think of anything else. She could not live with herself, she tells me, if she did not devote her talents to helping the many trans women whose lives are decimated by the bigotry and ignorance of those around them. Bigotry and ignorance inflamed by demagogues like Antonin Scalia, whose toxic rhetoric has done so much to incite and legitimate fear of gender nonconformity and elevate it to the level of constitutional principle. She is resolved to become a trans rights activist.

So that is Antonin Scalia’s contribution to physics. To drive a woman with a luminous mind from the study of quantum theory and statistical mechanics and condensed matter, and into the urgent project of safeguarding vulnerable people from the inhumanity he dedicated his life to spreading. An inhumanity that survives as his true legacy, safeguarded by deluded acolytes and admirers.

Scalia passed away in his sleep at a luxurious hunting lodge. He died as he lived, gun at hand, dreaming of killing helpless prey from a position of safety and comfort. May his successor on the Court have a loftier vision of law, and of life.

Bruce Hay is a professor at Harvard Law School