Noam Chomsky for secretary of education: Bernie Sanders needs to make this revolutionary call for our public schools

In his days before politics, Sanders had savvy, progressive thoughts on education. Here's a White House agenda 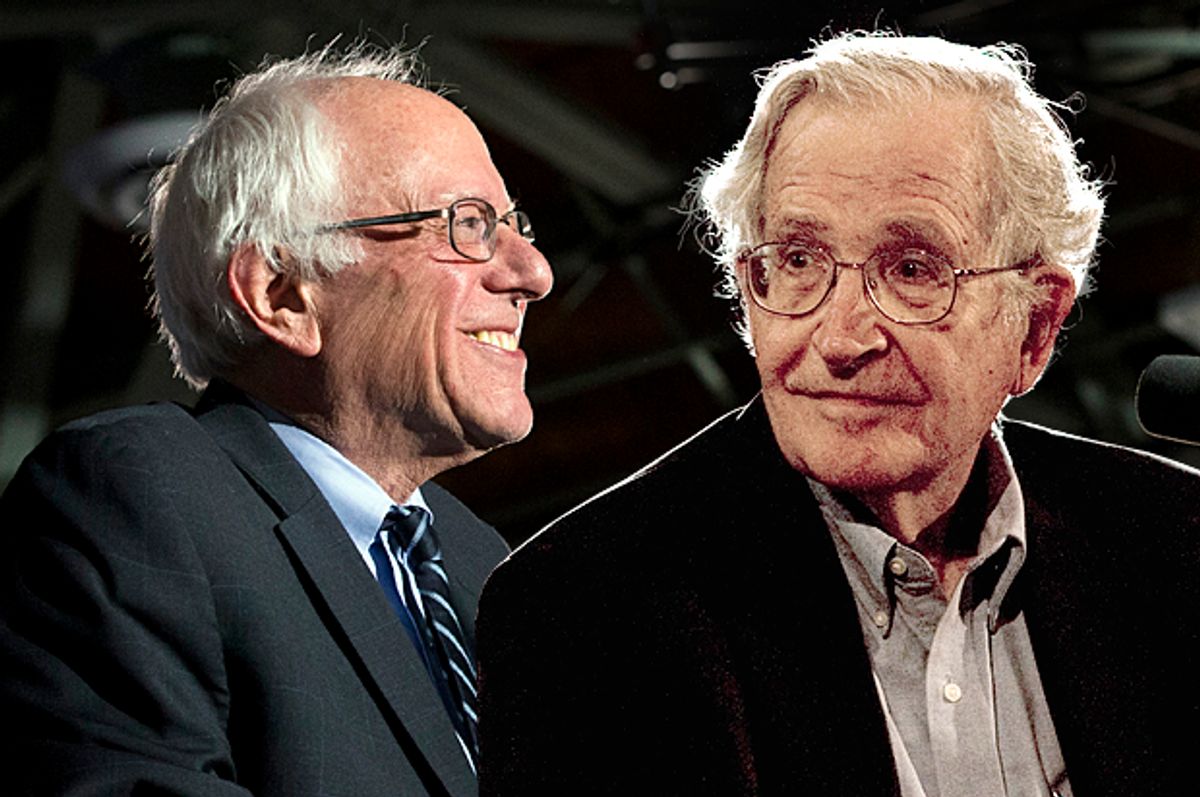 Throughout 1969, when he was in his late 20s and living in Vermont, Bernie Sanders wrote a series of diatribes on the American education system. “It is quite clear the basic function of schools,” he opined in a letter to the Vermont Freeman, “is to set up in children patterns of docility and conformity — patterns designed not to create independent and free adults, but adults who will obey orders, be ‘faithful’ uncomplaining employees and ‘good’ citizens.” In another piece, he offered this question to parents: “With regard to the schools that you send your children to, are you concerned that many of these institutions serve no other function than to squash the life, joy, and curiosity out of kids.”

Sanders was an unwavering critic of the fact that schooling was compulsory in the United States, concerned that the coercive powers of the state were decimating citizens’ self-determination in education, particularly those of children. He observed in a piece for the Vermont Freeman, “The revolution comes . . . when a father refuses to send his child to school because schools destroy children.” Sanders, himself, had just fathered a son in March 1969. And he hadn’t been the most academically astute student in school. At the University of Chicago, he was on the brink of failing his classes and the dean told him to take a year off. He told the New Yorker that “he found the classroom boring and irrelevant — and that he learned ‘infinitely more on the streets and in the community.’”

He worked for a union and a political campaign, participated in and organized protests against segregated campus housing and public schools, and retreated to the library, where “I read everything I could get my hands on — except what I was required to read for class,” Sanders noted in his book "An Outsider in the House." He says he read the works of intellectuals such as Karl Marx, progressive educator John Dewey, socialist leader Eugene V. Debs, psychoanalyst Wilhelm Reich, psychologist Erich Fromm and many others.

In a letter to the editor of the Freeman, Sanders wrote, “One of the most heartening signs in recent years is the growing belief among many people that the formal educational process (i.e. schools) are not only ‘not good’; — but that they are positively destructive and harmful. People are becoming aware that the function of schools is not to educate children but, in fact, to do the very opposite — to PREVENT education.” What he was referring to was a subversive, radical educational philosophy that had made inroads in communities across the country known as the free school movement. This was at a time when the nation was rocked by the countercultural phenomenon, marked by the anti-war, anti-nuclear, civil rights, feminist and free speech student movements as well.

Free school stalwarts identified the conventional school system as one of their enemies, because it crushed its captives’ curiosity, creativity and love of learning and ranked and sorted them for the capitalistic war machine. So they aimed to create small alternative schools outside of the government’s clutches and without grades, tests, or anti-democratic structures. They reckoned that the education system couldn’t be salvaged by making tweaks in instruction or curriculum. “So long as schooling was set up to serve the interests of a competitive, consumerist, mass-mentality society, it could never fully educate young people for lives of meaning and personal integrity, no matter how well-intentioned were its reformers,” as Ron Miller explained in his book "Free Schools, Free People."

One of the catalysts for the movement was a book by Alexander Sutherland Neill, a British educator who founded a progressive school in England called Summerhill. The school, which is still alive today, featured non-compulsory classes; freedom in learning; endless opportunities for children to play, explore and work on projects and individual endeavors; and democratic meetings where students and staff members alike met weekly to vote on school policies and matters. In 1960, Neill’s manifesto Summerhill, which outlined the school’s educational doctrines and his thoughts on childhood, learning and schooling, was published for an American audience. It sold millions of copies. Similar to Sanders' writings, several other educators and writers rose to national prominence with their searing indictments of traditional schooling, including educators John Holt, Jonathan Kozol, Herbert Kohl, George Dennison, and James Herndon, social critic Paul Goodman, and former Catholic priest Ivan Illich.

During the same time college students were raising hell on campus by occupying buildings in civil rights protests and against the Vietnam War in the late 1960s and early '70s, hundreds of free schools were established whose main purpose was to educate not for obedience and preparation for technocratic capitalism, but rather for freedom and living in a peaceful, democratic and humanistic society. The power and influence of the free school movement diminished in congruence with the decline of the popular uprisings and the final chapters of the Vietnam War.

Today, there is a renewed interest in alternative, democratic education at a time when public education has been thoroughly gutted by corporate education reformers, billionaires and foundations through privatization, austerity policies, school closure and neoliberal restructuring schemes. Students have also been fed a reckless diet of high-stakes standardized tests, which have burgeoned under President Bush’s No Child Left Behind Act (Senator Bernie Sanders voted against it) and President Obama’s Race to the Top program.

During this presidential race, there has been an astonishing lack of debate and discussion about K-12 education. This is quite unusual considering that more than 50 million students and educators are enrolled and employed by the system and in December, President Obama signed the most monumental federal education legislation in over a decade: the Every Student Succeeds Act, which replaces the No Child Left Behind Act of 2001. While the legislation has many shortcomings, such as maintaining the policy that students will be tested annually in reading and mathematics in grades three through eight, there are several benefits worth applauding. One is the statute that a state may evaluate a school’s effectiveness based on measures such as student and educator engagement and school climate and safety. Indeed, Sanders (full disclosure: I once bought a T-shirt from his campaign), as a member of the Senate Committee on Health, Education, Labor, and Pensions, strongly advocated for this policy.

Another and one of the most significant parts of the legislation is the formation of the Innovative Assessment and Accountability Demonstration Authority, which is a pilot program that allows up to seven states and the potential for more to implement holistic performance-based assessments that examine students’ critical thinking, problem-solving and creativity as opposed to their ability to fill in bubbles on a standardized test. Once again, Sanders was the primary architect of this initiative.

However, public education advocates have expressed some worries about other aspects of Sanders’ K-12 education record. Along with his colleague Senator Elizabeth Warren, he voted in favor of the Murphy Amendment, which historian Diane Ravitch has written, “would have enacted tough, federal-mandated accountability, akin to setting up an ‘achievement school district’ in every state.” The amendment urges for the creation of a system of “annually identifying and meaningfully differentiating among all public schools” and singling out the lowest-performing bottom 5 percent of schools and schools that miss their goals for two consecutive years, or, in other words, grading and ranking schools based on test scores and preserving the ruthless accountability regime.

It also requires that states carry out “any changes to personnel necessary to improve educational opportunities for children in the [low-performing] school.” This is neoliberal doublespeak for firing teachers. Sanders’ support for this amendment is odd since he has declared, “We should not be firing teachers, we should be hiring teachers.” Moreover, the senator voted against the Lee Amendment, which would have given parents the right to opt their children out of of state standardized tests without negative repercussions to their school’s funding.

Sanders needs to loudly and clearly say: The education policies under the Obama administration have failed. Public education needs to be funded equitably. I will appoint a progressive education thinker like Deborah Meier, Sir Ken Robinson, Howard Gardner, or Noam Chomsky to the position of Secretary of Education. Our schools should be democratically run by the students and teachers. Children have the right to learn freely and experientially, play, have voice and ownership in their schools, and access to respectful, well-paid teachers, counselors, nurses, mental health specialists and librarians. We must abolish corporal punishment in schools, a heinous practice that is currently legal in 19 states. We must reject high-stakes standardized testing. And parents should have the right to opt their children out of tests.

Over recent years, hundreds of thousands of parents, more than 200,000 in New York State alone, have opted their children out of standardized tests and droves of students, parents and educators in cities like Chicago, Newark, Seattle and Philadelphia have taken to the streets demanding the fall of the testing empire and the end to corporations’ jihad on public education. For a man who once called traditional schooling authoritarian and spirit-crushing, who was radicalized during the countercultural transformation, and who has spent his political life beating the drum for the redistribution of power and resources from the wealthy and elite to the masses, advocating for non-coercive, progressive public education for all seems firmly in Sanders’ wheelhouse. Arguably, there is no better national politician who can speak to this growing and organized movement and help disseminate across the nation an inspiring vision of how our education system should be revolutionized.

Nikhil Goyal is the author of the new book "Schools on Trial: How Freedom and Creativity Can Fix Our Educational Malpractice," which was published by Doubleday, an imprint of Random House, this month.