Robert Califf's ties to the industry run deep, and the Obama nominee just sailed through the U.S. Senate 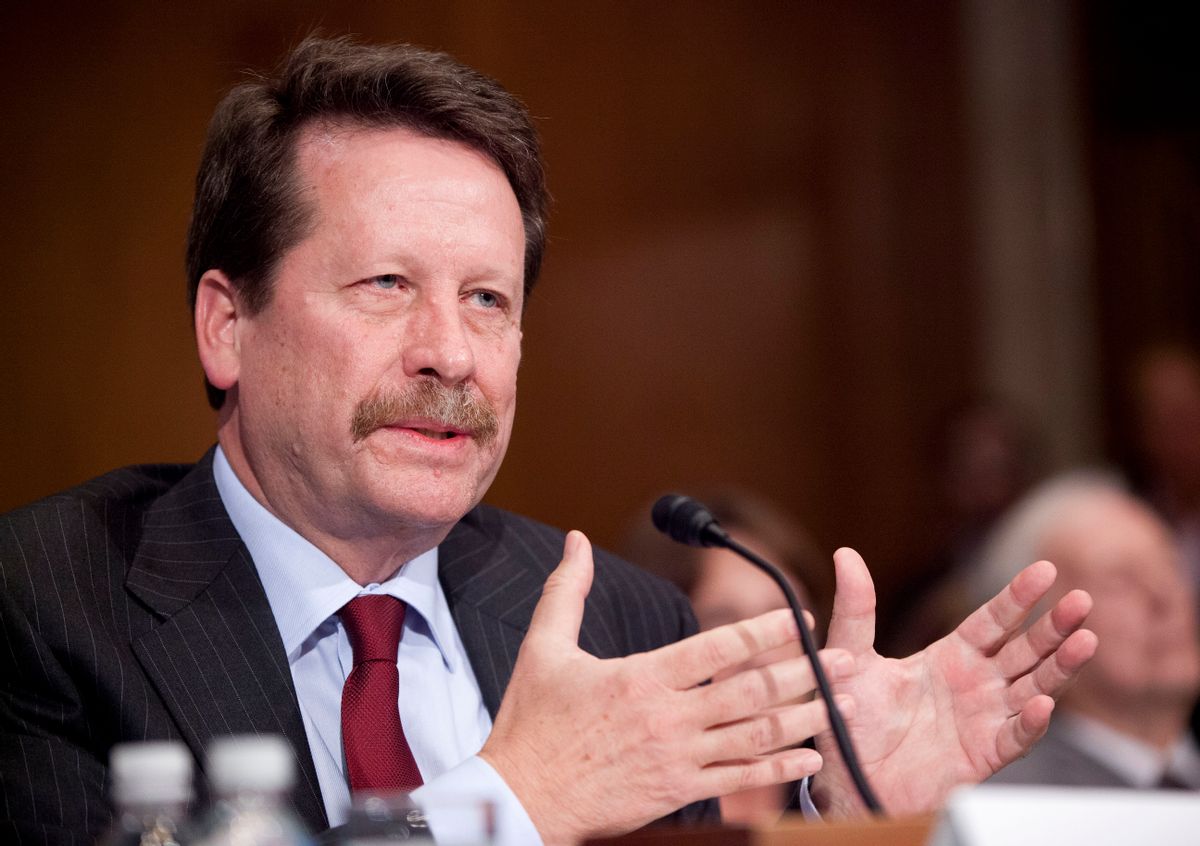 It is hard to believe only four senators opposed the confirmation of Robert Califf, who was approved today as the next FDA commissioner. Vocal opponent Bernie Sanders condemned the vote from the campaign trail. But where was Dick Durbin? Where were all the lawmakers who say they care about industry and Wall Street profiteers making money at the expense of public health?

Califf, chancellor of clinical and translational research at Duke University until recently, received money from 23 drug companies including the giants like Johnson & Johnson, Lilly, Merck, Schering Plough and GSK according to a disclosure statement on the website of Duke Clinical Research Institute.

Not merely receiving research funds, Califf also served as a high level Pharma officer, say press reports. Medscape, the medical website, discloses that Califf “served as a director, officer, partner, employee, advisor, consultant or trustee for Genentech.” Portola Pharmaceuticals says Califf served on its board of directors until leaving for the FDA.

In disclosure information for a 2013 article in Circulation, Califf also lists financial links to Gambro, Regeneron, Gilead, AstraZeneca, Roche and other companies and equity positions in four medical companies. Gilead is the maker of the $1000-a-pill hepatitis C drug AlterNet recently wrote about. This is FDA commissioner material?

Califf has gone on record that collaboration between industry and regulators is a good thing. He told NPR, “Many of us consult with the pharmaceutical industry, which I think is a very good thing. They need ideas and then the decision about what they do is really up to the person who is funding the study.” What?

He is known for defending Vioxx which is reported to have caused at least 50,000 heart attacks and events before its withdrawal. (Merck is said to have known about Vioxx’ cardio effects but marketed the blockbuster drug anyway.)

Califf was instrumental in the Duke drug trial of the blood thinner Xarelto and a cheerleader of the drug despite medical experts’ objections to its approval and 379 subsequent deaths. Xarelto's serious and foreseeable risks were back in the news this week.

Duke, where Califf directed clinical research, is still recovering from a major research fraud scandal that resulted in terminated grants, retracted papers and a "60 Minutes" special. It is the least appropriate place from which to choose an FDA commissioner.

Many had high hopes for the FDA when Margaret Hamburg was confirmed as commissioner in 2009 because of her public health background. But she swiftly moved to loosen conflict-of-interest rules governing those who can serve on FDA expert advisory committees and appointed Califf the FDA deputy commissioner for medical products and tobacco as she was leaving.

This is not the first time the FDA has brought in a Big Pharma cheerleader to lead the agency that regulates Big Pharma.

In 2005, a 33-year-old Wall Street insider known for recommending hot medical stocks, Scott Gottlieb, was named FDA deputy commissioner for medical and scientific affairs. When a multiple sclerosis drug trial was stopped because three people lost blood platelets and one died, Gottlieb called it "an overreaction" because the disease, not the drug, might be to blame. He rushed Chantix, Pfizer’s stop-smoking drug, varenicline, to market, which was linked to a string of 2006 suicides and the violent death of Dallas musician Carter Albrecht. Gottlieb was forced to recuse himself from planning for a possible bird flu epidemic because of his financial ties to Roche and Sanofi-Aventis and had to bow out of work related to Eli Lilly, Proctor & Gamble and five other drug companies.

Even without a Pharma-funded FDA commissioner, many dangerous drugs approved by the agency have been withdrawn due to great harm. Who remembers Vioxx, Bextra, Baycol, Trovan, Meridia, Seldane, Hismanal, Darvon, Mylotarg, Lotronex, Propulsid, Raxar or Redux?

Califf's confirmation amounts to a handover of the agency to Big Pharma.