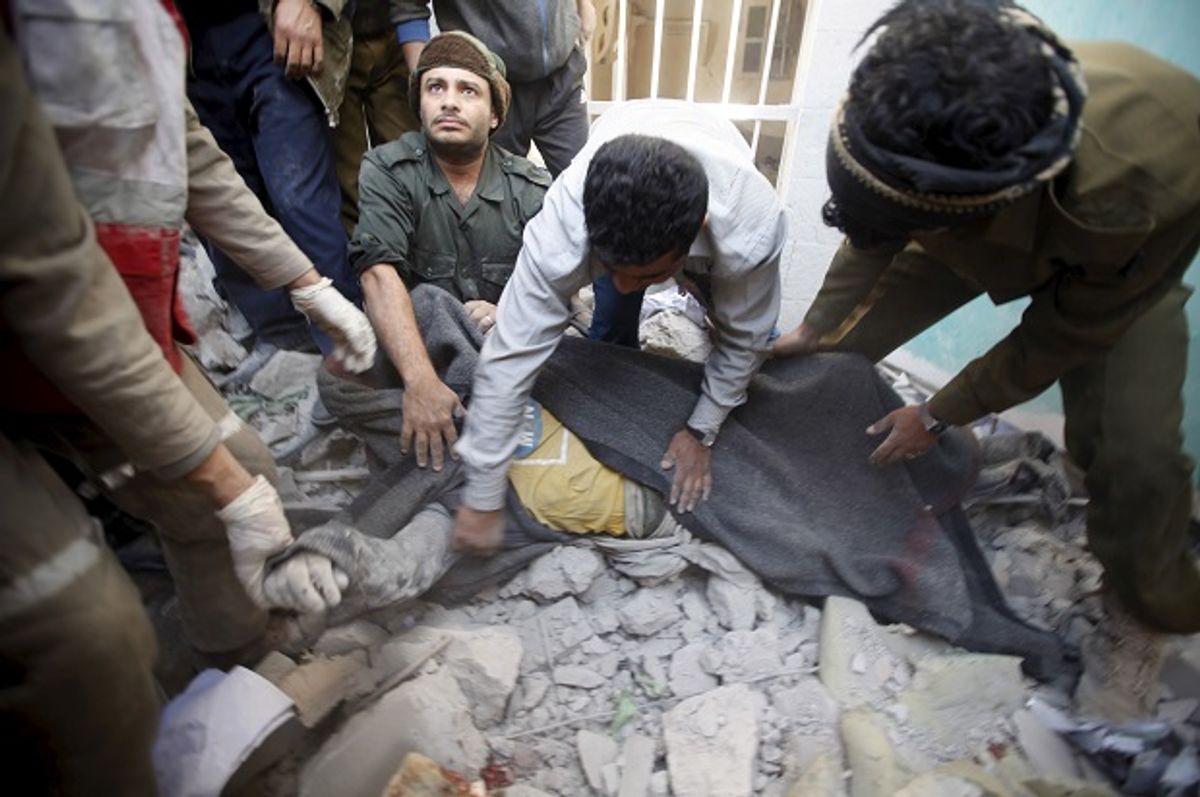 Yemeni police and medics cover the body of a dead man after the Saudi-led coalition bombed the police headquarters in Yemen's capital Sanaa, on January 18, 2016 (Reuters/Khaled Abdullah)
--

A Saudi-led coalition which is armed and supported by the U.S. and U.K. bombed a market near Yemen's capital Sanaa today, killing at least 40 people, Reuters reports.

At least 30 more Yemenis were wounded. The majority of the casualties were civilians.

Yemen has endured a brutal war since March 2015, although there has been little discussion of the destructive conflict in the U.S. media.

When the U.S. media does cover the violence, it often misleadingly depicts it as a civil war. In reality, it is not a civil war; rather, a coalition of Middle Eastern nations and militants loyal to President Abd Rabbuh Mansur Hadi, which is led by Saudi Arabia and backed by the U.S. and U.K., is fighting Yemeni Houthi rebels and militants loyal to former President Ali Abdullah Saleh.

The sporadic U.S. media coverage of the conflict also frequently echoes dubious myths about the war that have been circulated by Saudi Arabia, the U.S. and allies.

In its report, Reuters claims that the Houthi rebels are "Iranian-allied." There is little evidence that this is true, however, and award-winning investigative reporter Gareth Porter has debunked the little alleged evidence that exists.

Saudi Arabia, a theocratic absolute monarchy governed by an extreme form of Sunni Islamic fundamentalism called Wahhabism, regularly accuses anyone who criticizes it of being backed by Iran — such as anti-sectarian dissident Sheikh Nimr al-Nimr, a leader in the kingdom's Shia minority religious group, who was executed by the regime at the beginning of 2016, along with 46 other people.

With the backing of the U.S. and U.K. Saudi forces have for almost a year rained bombs down upon Yemen, the poorest country in the Middle East. Numerous human rights groups have accused the Saudi-led coalition of committing war crimes and deliberately targeting civilians.

The Saudi-led coalition has bombed scores of hospitals, civilian neighborhoods, an Oxfam humanitarian aid warehouse and even a refugee camp.

Saudi forces have dropped cluster bombs that were made in a Tennessee U.S. Army factory on civilian neighborhoods in Yemen, in what Human Rights Watch called "outrageous" and a "war crime." Cluster munition are banned in 118 countries, although the U.S. and Saudi Arabia refuse to ratify the international treaty banning them.

At least three Doctors Without Borders facilities have also been bombed by the Saudi-led coalition, even though the international medical humanitarian group had provided the coalition with its coordinates in every case.

The Saudi-coalition has even reportedly used "triple-tap" strikes, in which a plane bombs an area twice more immediately after hitting it the first time, in order to ensure that there are no survivors.

As of early January 2016, the U.N. estimated that almost 3,000 Yemeni civilians had been killed in the war. At least 5,300 more were wounded. These figures are likely noticeably larger now.

Houthi forces have also been accused of violating the laws of war and killing civilians in the war. The Houthis do not have an air force, and have battled Qatari and Emirati ground forces that invaded Yemen, along with Colombian mercenaries who were secretly sent by the UAE.

The U.N. says the Saudi-led coalition is responsible for roughly two-thirds of civilian deaths.

Moreover, a little-acknowledged blockade the Saudi regime has imposed on Yemen for almost a year has pushed the country into what the U.N. calls "humanitarian catastrophe."

Mass starvation is ongoing in Yemen, and the impoverished country is on the brink of famine. Approximately 14.4 million Yemenis — more than half of the population of the country — are food insecure, according to the U.N. And hunger is growing.

"The numbers are staggering," the U.N. has said, calling the mass starvation "a forgotten crisis, with millions of people in urgent need across the country."

Because of the Saudi-led war and blockade, humanitarian organizations have warned since June 2015 that 80 percent of Yemen's population, 21 million people, desperately need food, water, medical supplies and fuel.

Western nations, particularly the U.S. and U.K., have fueled the extreme violence.

Amnesty International says the U.K. is also funneling weapons to the Saudis in violation of an international arms trade treaty. Britain sold the Saudi regime more than $1.43 billion of bombs in just three months in late 2015.

The European Parliament called for an arms embargo on Saudi Arabia this week.

American and British military officials are physically in the command room with the Saudi bombers, and have access to lists of targets in Yemen, leading some analysts to argue the U.S. has essentially outsourced the war to Saudi Arabia.