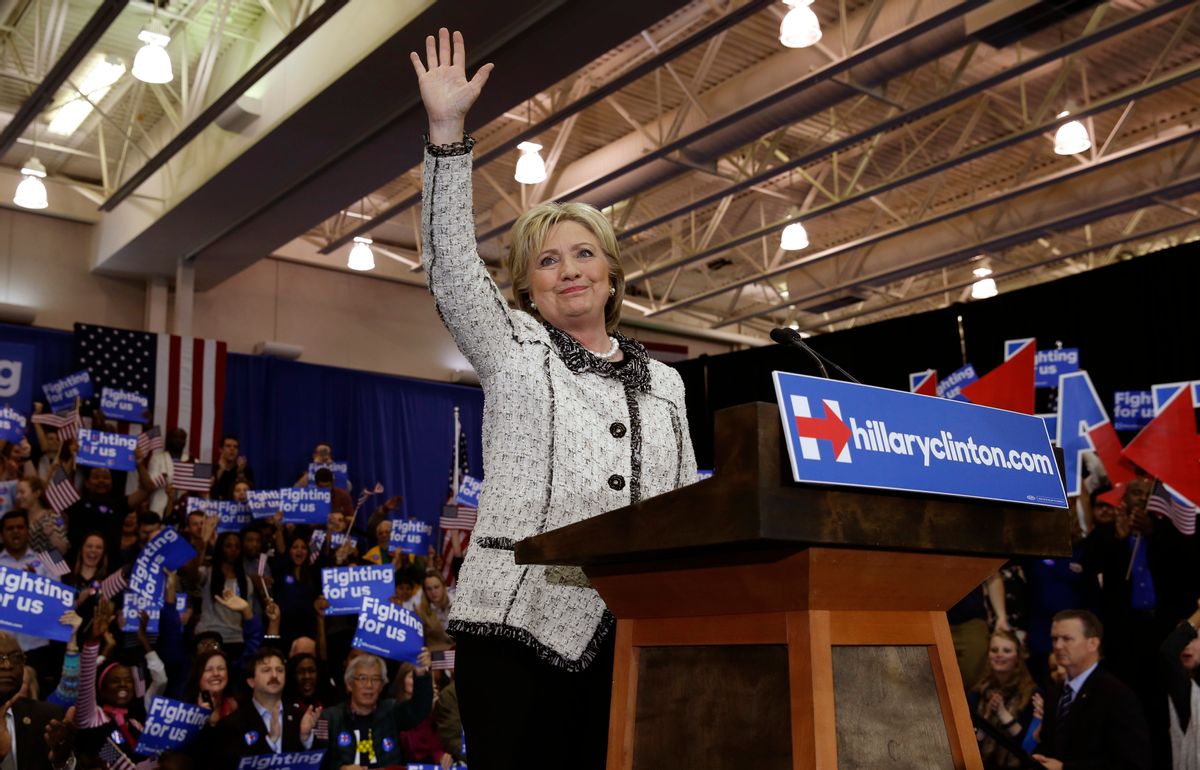 Hillary Clinton waves to supporters after her victory speech in South Carolina. (Reuters)
--

To hear the pundits tell it, the Democratic primary race is basically finished. Hillary Clinton, having wrapped up a huge victory in South Carolina on Saturday, is on her way to the nomination. CNN was full of people talking about how Bernie Sanders has made Clinton a much better candidate, has pushed her left, so he should be happy — all that classic stuff.

We obviously have no idea if the reports of Sanders' imminent demise are true. There is a ton of voting left, with delegate-rich Super Tuesday on the horizon. Sanders has the money and the movement to keep the race going for months.

Nevertheless, Sanders is running into some very standard issues for any insurgent candidate. His army of young people don't vote enough. Lots of people have never heard of him. Many are pretty satisfied with the state of the Democratic establishment.

He also has a clear and persistent problem with black voters. The numbers in South Carolina were staggering. Clinton won nearly 90 percent of the black vote, including the majority of the young people who usually go for Sanders. Clinton's efforts to cast Sanders as a "single issue" candidate who wasn't focused enough on the black community and posed too much of a risk to the Barack Obama legacy paid off.

It doesn't matter, in one sense, what is behind Clinton's transformation into the queen of intersectionality, constantly talking about all the "barriers" that need to be broken once Wall Street is on the ropes. (That presumes that she even wants Wall Street on the ropes, but that's for another day.) It may leave a very bad taste in the mouth to see her using race and gender as a way to counter Sanders' domination of the economic arguments shaping the campaign and distract from her obvious comfort with the oligarchical class. It may seem disingenuous, the ultimate political contortion. There may be a nagging feeling that Clinton will contort yet again when she gets into office. That's what politicians do. It doesn't discount the fact that Sanders' constant pivot back to economics is reductive and incomplete—racism and patriarchy permeate every facet of our lives no matter what our economic status—and that Clinton is winning the argument among black voters.

Moreover, buried underneath the persistent questions about the masses of young people who have spurned Clinton are a hard core of older people, especially women, who are extremely eager to vote for her. Sanders has shifted his messaging somewhat, but he clearly needs to figure out how to capture more older votes and how to convince black voters that he is a better and more trustworthy candidate than Clinton.

Obviously, Sanders is facing an uphill climb stacked up against Clinton, who has been running for president in one way or another for decades. But the hill is there. Clinton may be guilty of pandering, but she's been very focused and responsive to the shifting pressures and issues in the contest. At her victory rally in South Carolina on Saturday, a hush fell on the crowd as she referenced the mothers of several of the black victims of police killings who have been campaigning with her. You can call that whatever you want, but it is a formidable, potent thing, and those women cannot be dismissed as merely pawns in Clinton's master plan. Sanders has to make a better case for himself than he's made so far.

As a white person, I am very, very happy to stay out of the debate about who black people should vote for. Sanders is running for office. He doesn't have that luxury.