Jailed for being homeless 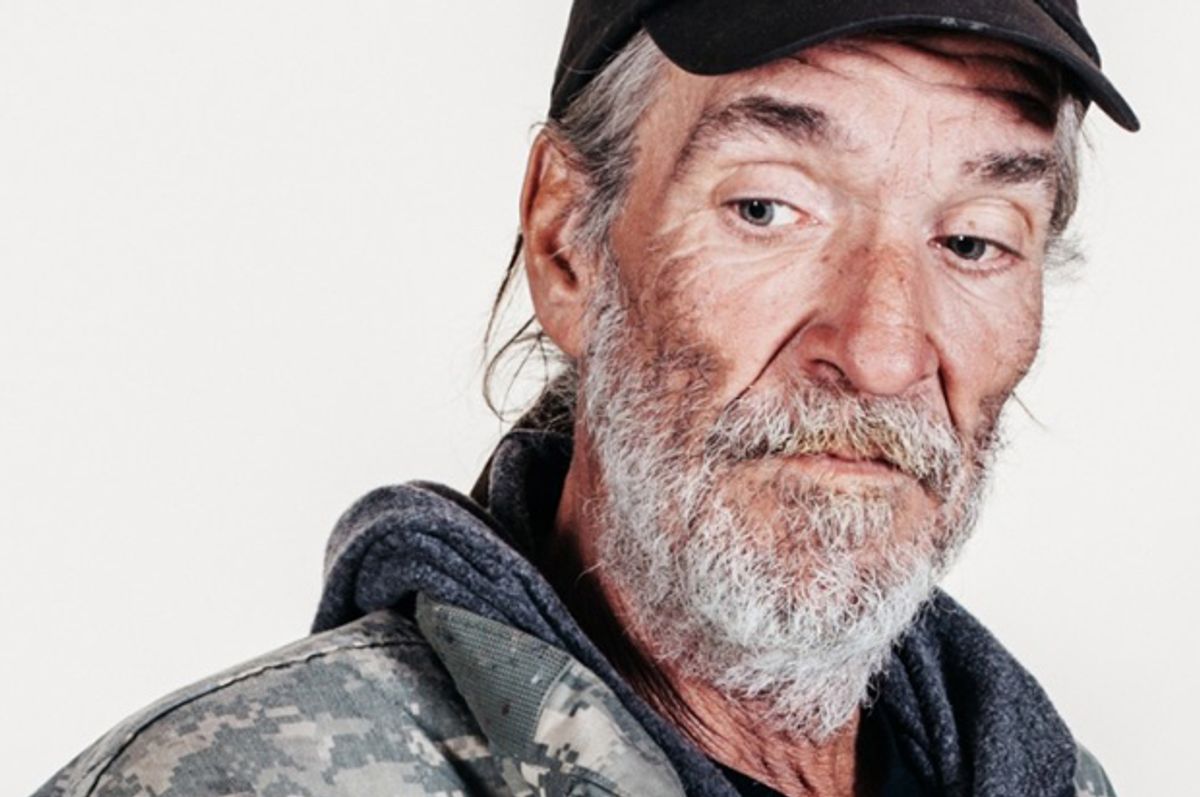 This piece was produced for The Human Toll of Jail, a storytelling project of the Vera Institute of Justice in collaboration with Narratively, supported by the John D. and Catherine T. MacArthur Foundation as part of the Safety and Justice Challenge.

On an overcast autumn morning, 21-year-old Joey Fiala sits on a sprawl of sleeping bags and blankets, watching Colorado’s prolonged summer yield to winter. Fiala, originally from Kansas City, Missouri, is among a group of homeless people who gather most days in Jefferson Park on the north end of the Old Town Square section in Fort Collins. Here, a grassy lot sidles up to a busy railroad track and serves as a sort of daytime rest stop for folks without shelter. The men and women socialize and sneak catnaps in between hustling for cash and shuttling around the community to make use of its spread-out resources. When night falls, however, residents without shelter rush to get out of sight. Groups disperse and individuals head off in pairs or on their own.

More from Narratively and the Vera Institute of Justice: "Return to Rikers"

Ray Lyall, 57, homeless for two years, has worked with Denver Homeless Out Loud (DHOL) for the past 22 months. He was arrested on October 24, along with others working on DHOL’s Tiny Homes project. Since he was released from jail, he has been camping with a group at a site in Denver at 26th and Lawrence Streets, which was raided on December 3. Lyall says the camping ban is used to target people sleeping outside and give tickets for other offenses. “Can’t have anything under or over you,” he says, explaining the camping ban. “I can lay in the freezing snow but I can’t have anything on my back.”

More from Narratively and the Vera Institute of Justice: "Legal Perils of Homelessness"

Fort Collins, a college town at the base of the Rocky Mountain foothills, prohibits practices such as loitering, “misuse of public waters,” and “camping or pitching a tent without permission.” Being homeless here necessitates invisibility, and consequently, isolation. Things that offer safety and even comfort at night—tents or multi-person encampments—make hiding difficult, and often land homeless people in jail.

More from Narratively and the Vera Institute of Justice: "The Human Toll of Jail"

“I’ve been to jail twice for camping,” Fiala says between swigs of coffee and bites of a doughnut, pulling his jacket tight around his small frame.

“I’ve been in for camping and for trespassing,” chimes in Steve, who doesn’t give his last name. A dad with a perfect goatee and cheeks rosy from the incoming chill, Steve hesitates to offer more. But others in the group nod in agreement.

“Yeah, I got ticketed twice for sleeping under the Linden Street Bridge,” Fiala says, jumping back in. “I was sick, sleeping on a mattress under the bridge, and they woke me up and gave me a ticket. I balled it up and threw it in their face. ‘F— you! I’m not gonna pay that. I can’t pay that.’ So I ended up in jail for failure to appear.”

Recent years have seen a surge of policing efforts throughout Colorado targeting those without shelter. Numerous communities have banned panhandling, camping, or sleeping in cars on public property. Loitering and trespassing laws prevent homeless individuals from having a safe place to rest—or options for washing up or using a bathroom. Violators face fines of $100 or more, an expense that quickly adds up for repeat offenders, landing many with warrants and, eventually, jail time. (Officials in Fort Collins have said they are looking into proposals that would allow people to sleep outside in certain places.)

According to the 2015 report “No Right to Rest: Criminalizing Homeless in Colorado,” more than half of the state’s homeless population has been in jail for minor infractions.

Fiala has been homeless about three years, or pretty much his entire adult life. When he first moved to Fort Collins with his then-girlfriend, they slept in their car. “But,” he sputters, in sequential bursts of frustration, “she cheated on me….She wrecked [our car].” He dunks a doughnut in his rapidly cooling cup of coffee and shudders. “You got a cigarette?”

Wes Hammond, a middle-aged man who has been listening quietly, suddenly plunges into the exchange. Hammond has been homeless on and off for much of his life. Born in Kentucky, he lived briefly in Tennessee before heading west. “I hitchhiked for three days to Colorado and this guy picked me up, asked if I wanted to work on a ranch,” he says. “So I did, up in the mountains, but I got tired of that, so I built a bike and I rode it off that mountain.”

He arrived in Fort Collins in 2010, initially finding stability in a relationship. When that “blew up” a year ago, he found himself back on the streets.

“I’ve had three camping tickets, two trespassing tickets, open container, parks violation, and urinating in public,” he claims. “My fines come to $2,009….I just got out of jail last night. Just one night this time. Failure to appear. Tacked on a $50 fine.” He takes a drag off the spliff that’s been floating around the circle and shakes his head ruefully. “I won’t be able to pay it. And all my stuff’s there at the police station. I can’t get to it.”

Steve, eyeing the joint, chimes in once more. “You better be careful with that. We may be in Colorado, but our house doesn’t have any walls,” he says, referring to the state’s legalization of marijuana use in private, but not in public spaces. As with open alcohol containers and intoxication, smoking cannabis is permitted only for those with the means to do so behind some sort of closed door. Individuals who lack shelter automatically miss out on key benefits afforded by seclusion. The very invisibility they seek when scattering at night is almost impossible to come by without the security of a safe and private place to rest.

Almost 70 miles away in Denver, it’s a very different scene at a not-so-different park. On the night of October 24, 2015, a group of homeless individuals and their supporters planted themselves in Sustainability Park. Led by Denver Homeless Out Loud (DHOL), a grassroots activist organization, the volunteers had spent several days building “a tiny-home village to be occupied and managed by houseless people.”

The U.S. Department of Housing and Urban Development estimated that nearly 10,000 Coloradans were homeless on a given night in January 2015. Advocates note that these point-in-time surveys—volunteers attempt to count individuals in shelters and on the streets on a single night—tend to result in drastic underestimates. The methods make it easy to “miss” those who are homeless short term, temporarily institutionalized, doubled-up with friends, not engaged with resources, or effectively hidden from authorities. However, the numbers do tell us that, while national homelessness has declined since 2013, in Colorado it has remained steady, even seeing a slight increase. More specifically, Denver’s point-in-time data show a consistent upward trend in metro-area homelessness since 2011, from 3,007 to 3,978. According to the “No Right to Rest” report, “shelter beds are available for only about 10%” of Denver’s homeless population.

Nonetheless, Denver and other jurisdictions across the state continue to propose bills and implement policies that make it more difficult to survive on the streets. Denver has not only banned camping but also the use of a variety of items for shelter, including tents, cardboard, and newspapers. In the midst of this citywide dearth of affordable housing, DHOL’s tiny homes were designed to provide much-needed shelter. But when 70 police officers, including a SWAT team, descended, Resurrection Village quickly became a protest site.

Police confiscated the tiny homes and as people scattered, 10 were arrested, including DHOL volunteer Ray Lyall. Originally from California, Lyall moved to Colorado in the 1980s to be closer to family and get a fresh start. Now 57, he has been homeless since a botched construction deal two years ago left him unable to pay rent.

Lyall finds the city’s shelters too loud, too dirty, and too full of drama to rest; he prefers to sleep outside.

Lyall’s arrest for trying to live in Resurrection Village racked up consequences of its own. “I was the last one out of jail,” he says. “I had to go to court three days after I got out of jail and I’ve gotta go to court again next week and it’s gonna last a long time…$25 for a public defender, $25 for a jury trial, and they’re gonna have to waive it. I’ve told everybody possible, ‘I’m homeless. I have no money.’ If they wanna say I can’t have a jury trial, great. That’ll look better for me. I’m homeless so I can’t have a jury trial. I can’t afford your system.”

According to the National Law Center on Homelessness & Poverty, three-quarters of homeless people in the United States don’t know of a safe and legal place to sleep. With few, often inadequate, beds to meet the growing need, homeless residents by default carry the double burden of being poor and being criminal. In places like Fort Collins, where a 2015 point-in-time survey revealed a 4 percent rise in homelessness, if they can’t stay out of sight, they will be ticketed.

Since most are unable to afford the sanctions, tickets equal jail time. “The thing is, they’ll always take you [to jail] because you can’t pay the fines,” says Joey Fiala.

And though Fort Collins has taken steps to reduce the consequences of the legislation that criminalizes homelessness, some worry these approaches gloss over the real problem.

A year ago, the Municipal Court introduced Special Agency sessions to address so-called “quality of life violations” in a “compassionate, resourceful manner.” Homeless defendants charged with various offenses may be referred for alternative sentencing. But Fort Collins Homeless Coalition’s Cheryl Distaso argues, “This erases the question of whether or not that person should even have gotten a ticket in the first place.”

Two days before Thanksgiving, Michael “Miguel” Wheeler serves dinner at Jefferson Park, as he has nearly every Tuesday since getting off the streets himself. The lawn bustles all afternoon with chatter and laughter as homeless folks fill their bellies, sip hot coffee, and stock up on brand new socks. But once darkness descends, people ready to head their separate ways for the night. A young couple turns north, starting the several-mile march beyond city limits, where it’s legal to pitch a tent if you avoid private property. Old-timers who’ve been living outside for decades attach loaded-down carts to rusty bicycles—houses on wheels. Others seem to disappear into the fading light of dusk. Invisible.

“When the sun goes down, it’s time to go to sleep,” Fiala says. Still, he adds, “every time they find us, they’re gonna give a ticket.”