The first Gulf War was not the good one, and 25 years later, as false history hardens, we must remember why 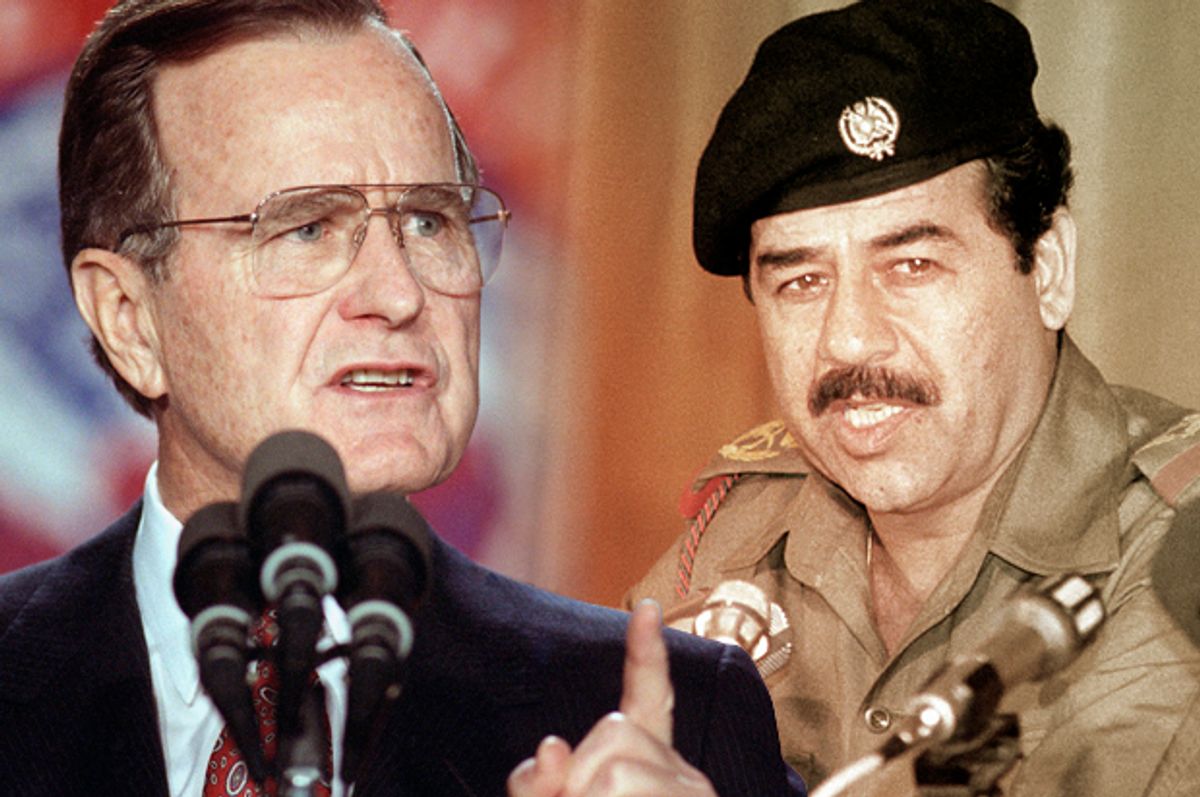 Ted Cruz has won applause in recent debates by citing what is seen as America’s last unambiguous victory. To defeat ISIS, he said, we should look to the first Gulf War. (Which ended 25 years ago today.) Cruz wants a repeat of that stormy desert operation, with its thousand-plus air attacks in 37 days —and with all its attendant destruction. “There ain’t much left” to a place after such a campaign, Cruz said with a smile.

Ohio Gov. John Kasich has likewise argued that we’d beat ISIS if we just called upon “the coalition that we had when we went to the first Gulf War." Likewise, Donald Trump has been sure, when dismissing the Bush family legacy, to separate the calamities of the son from the victories of the father. Even Michael Dukakis, in an interview this month, praised how George H.W. Bush handled that war.

So, something that’s lauded by everyone from Cruz to Dukakis to must be an unmitigated good, right? Well, maybe not. Let’s take a look. It’s not hard to see so many of our troubles getting their start in 1991’s glowing sand.

The Gulf War—that is, the effects-laden franchise opener, and not the bloated sequel—did mark a great victory, by at least one measure.  In turning back Saddam Hussein and liberating Kuwait, the United States lost 148 soldiers in combat; the Iraqi military in the same period endured up to 22,000 casualties.  So, yes, of course: a victory. But of what kind?

The Gulf War marked the first time in the modern era that we sent our military to fight an Arab-world enemy. Think about that. What has seemed an awful but inescapable part of American foreign policy—the drawn-out struggle against one Islamic foe or another—began in that war. And our having waged that war is precisely what first inflamed the region’s zealots against us. Think about that, too. Not many remember this, but what first motivated Osama bin Laden to attack the United States? It was intolerable to an Islamist such as bin Laden that—because of the fight against Saddam—there were "infidel" American troops in Saudi Arabia, home of Islam's two holiest sites, Mecca and Medina.

Of course, the father’s Gulf War also served as a prelude to the son’s Iraq War.  Which is to say that in 2004, America went in and finished off Saddam, at least partially because of W.'s unfinished Freudian business there.

Yes, well (you might argue), we needed to go fight Saddam in 1991, in order to protect our great ally Kuwait (which Iraq invaded at the end of 1990)!  But, that’s not so. The Gulf War should never have been fought.

In the lead-up to the invasion of Kuwait, the United States’ ambassador to Iraq, April Glaspie, met with Saddam.  According to a transcript of that meeting released by the Margaret Thatcher Foundation, Ambassador Glaspie told Saddam, “We have no opinion on your Arab-Arab conflicts, such as your dispute with Kuwait. Secretary Baker has directed me to emphasize the instruction, first given to Iraq in the 1960s, that the Kuwait issue is not associated with America.”

This led many to conclude that, in the words of Sir Edward Mortimer, “It seems [likely] Saddam Hussein went ahead with the invasion because he believed the U.S. would not react with anything more than verbal condemnation.”

We’re not great at looking back in this country; we’re not great at drawing the lessons from what happened the day before yesterday. But on this anniversary of the Gulf War, you’ll hear politician after politician celebrate what happened in Iraq 25 years ago.  Take a moment to think about how different the world might look—might feel—if we’d never kicked that hornet’s nest.