Leo's Oscar isn't overdue: He hasn't won before because he didn't earn it

DiCaprio has been nominated 4 times, and those losses were fair—only now is he truly a deserving contender 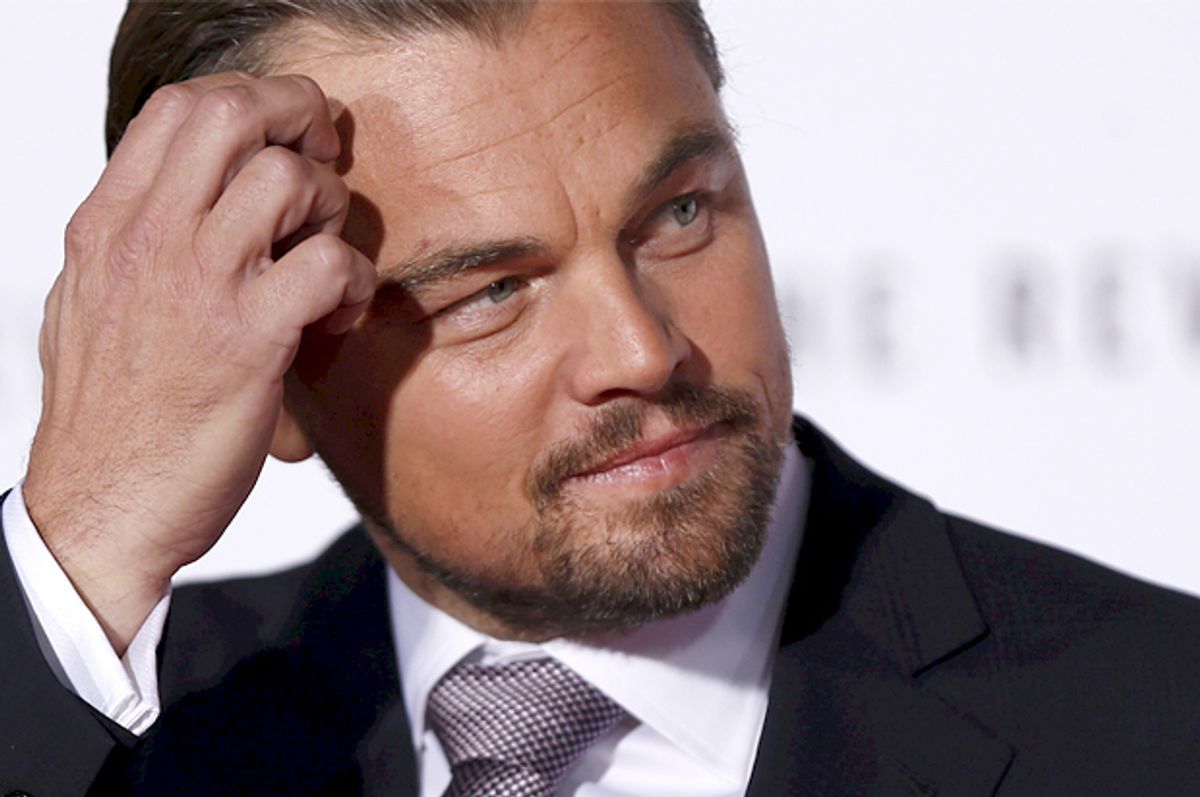 Those three syllables will be gasped with a sigh of relief at Oscars across the country when perpetual bridesmaid Leonardo DiCaprio takes home the best actor trophy for “The Revenant” tonight at the Academy Awards. (He’s heavily favored to win.) DiCaprio is widely viewed—especially by his vocal fan base—as the most overdue and overlooked actor in Hollywood, someone who is continually snubbed for his work. DiCaprio has been nominated four times previously but has never won. He wasn’t even nominated for his work in box office hits like “Titanic,” “The Departed,” “Inception” and “The Great Gatsby,” or smaller fare like “Revolutionary Road.”

But while this narrative suggests that Leonardo DiCaprio’s lack of awards bling is a grave miscarriage of justice on the part of the academy, this has nothing to do with Oscar prejudice. DiCaprio just hasn’t earned it. While many can agree that he deserves his award for “The Revenant,” he is far from one of the finest talents of his generation. He’s a solid performer who has long benefited from great role selection, even though he rarely adds much to the movie outside of his own celebrity. As one of the few actors who remains a box-office draw, you might go to the movies for DiCaprio, but he’s rarely the reason you stay.

FiveThirtyEight’s Walt Hickey recently debunked the myth that DiCaprio is “overdue” by showing just how many winless actors are more deserving of a performance award—including Laura Linney, Matt Damon, Ed Harris, Joan Allen and Sigourney Weaver. No one knows what an Oscar snub is better than Annette Bening, who was close to winning three times but was shut out on each occasion. She lost twice to Hilary Swank. Glenn Close has been nominated six times, but rarely has anyone raised much of a fuss when she was passed over in 2012 for “Albert Nobbs,” in which she played a woman living as a man in 19th century Dublin.

Awards bodies often disagree on who merits recognition when trophies are given out, but there’s a rare consensus on the subject of DiCaprio. Before this year, Leo had never won a major competitive acting award. He’s been passed over at the Screen Actors Guild Awards five times and by BAFTA voters thrice. For his work in “Wolf of Wall Street,” the Critics Choice Awards handed him the consolation prize of best actor in a comedy, while he won twice at the less competitive Golden Globes. The Globes give out best actor awards for both comedy and drama. This makes them much easier to win than Oscars, where actors compete in just one category.

There are a couple of reasons he hasn’t won yet. The first is that he has what I’ll call the “Amy Adams Problem”: The dependable actress has been Oscar nominated five times, always against stiff competition. Her strongest bid was her first nomination in 2006, playing the pregnant flibbertigibbet Ashley in “Junebug.” Adams was a critical darling, but Rachel Weisz’s performance in “The Constant Gardener” was simply unstoppable—winning the Golden Globe, SAG and the BAFTA, before going on to repeat at the Oscars. This would happen to Adams again in 2013, when Anne Hathaway won everything in sight for “Les Miserables,” and in 2014, when she was steamrolled by Cate Blanchett (“Blue Jasmine”).

Leonardo DiCaprio’s best shot at winning was likewise his first: In 1994, he was nominated for playing the intellectually disabled younger brother to Johnny Depp in “What’s Eating Gilbert Grape,” still one of the best-ever performances by a child actor. However, he was up against both Tommy Lee Jones for “The Fugitive” and Ralph Fiennes for “Schindler’s List.” The best supporting actor trophy should have gone to Fiennes, but Jones, a respected character actor, proved a sentimental favorite. He won instead.

Throughout his career, DiCaprio has continually competed against actors that were more deserving. Like Amy Adams, Leo continually gives the third- or fourth-best performance in whatever category he’s nominated in. In 2004, Jamie Foxx won best actor for “Ray,” but otherwise, the award would have likely gone to Don Cheadle, so great in “Hotel Rwanda.” (Cheadle was Ebert’s pick.) Three years later, DiCaprio (“Blood Diamond”) lost to Forest Whitaker for “The Last King of Scotland,” but there was also Ryan Gosling’s breakout turn in “Half Nelson” and beloved veteran Peter O’Toole, who earned his seventh nomination (with no wins!) for “Venus.” Now that’s overdue.

In fact, DiCaprio often isn’t even the most deserving actor in many of the films in which he appears. While DiCaprio was “snubbed” for both “Titanic” and “Revolutionary Road,” Kate Winslet was not. Winslet earned her first Oscar nod for the former, and enjoying a rare double win at the Golden Globes for both “Road” and “The Reader.” At the Oscars, she would win for "The Reader," but anyone who follows these things knows the award unofficially recognized her work on both films. DiCaprio was later passed over for “Django Unchained” and “The Aviator,” but his respective costars Christoph Waltz and Cate Blanchett both won. They were just better.

Leonardo DiCaprio is a decent actor, but his strength is not his performances but his pedigree association. Throughout his career, he’s been lucky enough to work with the types of name auteurs whose work continually merits Oscar consideration: Christopher Nolan, Quentin Tarantino, Steven Spielberg, Baz Luhrmann, Danny Boyle, Woody Allen, Ridley Scott and Martin Scorsese, DiCaprio’s frequent collaborator. But do you even remember his performance in “Blood Diamond” or “Gangs of New York”? In “Gangs,” Leo seems uncomfortable and out of place in the period decor of turn-of-the-century Manhattan. It’s Daniel Day-Lewis who kills it.

DiCaprio might be great at selecting roles, but he has rarely elevated his material—or disappeared into it. Leo is often referred to as a “latter-day Brando,” but he’s long struggled to overcome his outsize stardom. Like Tom Cruise, Leonardo DiCaprio’s biggest issue is that he’s simply too famous to play anyone but himself—or a version of what we believe him to be. Cruise might be laughable as a white savior in “The Last Samurai,” but his performances in films like “Jerry Maguire” and “Magnolia” succeed by playing off his persona. Due to the DiCaprio’s own well-publicized tabloid life, it’s much easier to buy him as millionaire trader Jordan Belfort in “Wolf of Wall Street” than an Irish immigrant. He knows a thing or two about extravagance.

What’s been most fascinating in the response to DiCaprio’s current work in “The Revenant” is that it serves as a meta-commentary on the actor’s own quest for that elusive recognition from the academy. For Iñarritu’s famously brutal shoot, he had to eat raw bison meat, crawl inside a buffalo carcass, and dive into the ice-cold rivers of an inhospitable tundra. It’s as if Leonardo DiCaprio is saying: “I killed myself to win an Oscar. What more do you want from me?” Clearly the extra effort has paid off: He won best actor kudos from the Screen Actors Guild, Broadcast Film Critics, and the Chicago Film Critics Association, while receiving a standing ovation at the Golden Globes.

While that reception might signal that awards groups are making up for two decades of leaving him in the cold, Leonardo DiCaprio simply did something in “The Revenant” he’s never done before: lose himself in the work. No matter your feelings about Iñarritu’s tentative Oscar front-runner, DiCaprio is unimpeachably great, first time he’s truly transcended his star persona. His apologists might suggest that he deserves an Oscar because he’s overdue or because he’s one of our last great movie stars, but he’s finally done something even better—learned to be a great actor.