Teflon Don: Rubio and Cruz's stampede of attacks won't stop the Trump juggernaut — nothing will stick to this guy

Donald Trump is immune to harsh criticism on his character, background and even his conservatism 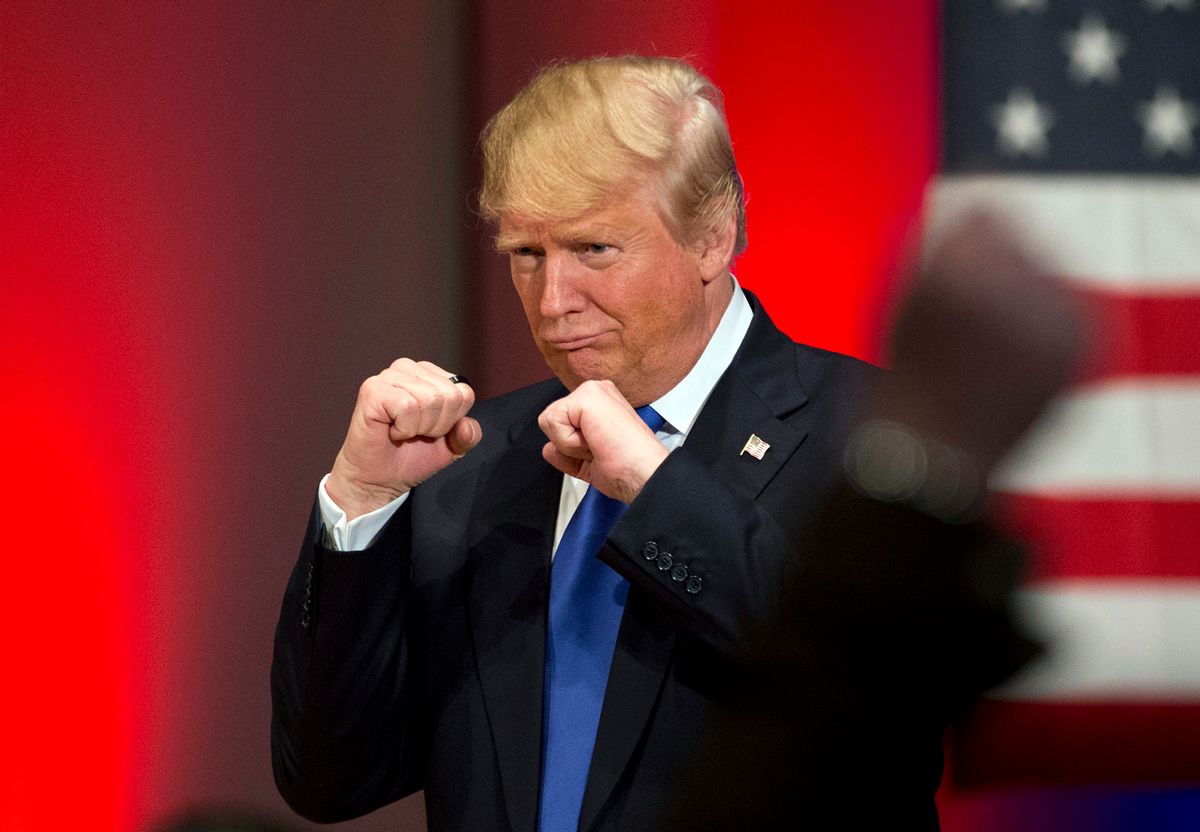 Donald Trump had his worst debate last week. Marco Rubio and Ted Cruz were desperate and looking to attack – and they did, mostly because they’re running out of time. If this race isn’t over already, it may well be after Super Tuesday. Trump has bulldozed his way through the primary process, insulting and emasculating every candidate in his way.

And it’s working masterfully, as the latest polls and election results show.

Despite being savaged on the debate stage Thursday, Trump’s numbers have spiked. In the latest CNN/ORC national poll released Monday morning, Trump’s lead over the GOP field has increased to 33 points. Marco Rubio, his closest competitor, is polling at 16 percent followed by Cruz with 15 percent. Ben Carson and John Kasich are at 10 percent and 6 percent, respectively.

As Trump’s juggernaut rolls onward, Rubio and Cruz have accepted that this isn’t a conventional campaign, and Trump isn’t a conventional candidate. If he’s beatable at all (and that’s a big if), it will require a different approach, a merciless approach.  Rubio in particular appears to have received the memo. In the last week or so, the Florida senator has altered his strategy. He’s now dialing down the platitudes and ratcheting up the “energy,” as Trump would say.

According to a New York Times report, Rubio didn’t want to mud sling. The hope was that he could wax poetically about “a new American century” until only he and Trump were left standing. But that’s clearly not enough: “Senator Rubio, seeing his path to the Republican nomination grow narrower with each contest, has determined that the only way to beat Donald J. Trump is to fight like him: rough, dirty and mean.”

“We came to the conclusion that if being part of the circus is the price you have to pay in order for us to ultimately be able to talk about substantive policy, then that’s what we’re going to do,” said Todd Harris, one of Rubio’s key advisers.

Rubio’s new tough guy shtick was on full display at last week’s debate. “If he hadn’t inherited $200 million,” Rubio said at one point, “you know where Donald Trump would be right now? Selling watches in Manhattan.” He also lambasted Trump for hiring illegal immigrants to work on his projects and mocked him for launching a “fake school,” an underhanded swipe at Trump University. Rubio has stayed on the offensive since the debate, calling Trump a “con artist” with the “worst spray tan in America.”

Ted Cruz, for his part, has adopted a similar approach. He's enjoining voters not to be fooled by Trump’s “P.T. Barnum” routine and the “dancing bears” of the 2016 election. Even before the last debate, Cruz was trying to lure Trump into a public fight. For instance, he’s called Trump a fake conservative, implying he’s a kind of ideological chameleon. And Cruz has begged Trump to follow through on his threat to sue him for defamation, saying he’d love the opportunity to ask Trump about his record “under oath.”

Entertaining though it is, the rancorous assaults on Trump by Rubio and Cruz are mostly pointless. Trump is immune to attacks on his character or background or even his conservatism. Nothing sticks, no matter how true or scathing.

Part of it has to do with the nature of his appeal. I argued a couple of weeks ago that Trump’s strength is his ability to connect on an emotional level, to play the identity politics game. People don’t support Trump because of who he is or what he believes; they support him because of who they are and what they feel.

I wrote: “Trump appears honest because he never really says anything. He’s a blank slate onto which people can project whatever they want or need to project. He says just enough to dog-whistle, to activate the anxieties of his supporters, and no more.”

The great advantage of being a blank slate is that it makes Trump a mirror. People look at him and see only themselves – their anger, their grievances, their beliefs. It’s not uncommon for voters to choose candidates for emotional or non-empirical reasons, but Trump is an exceptional case. He held a rally in my hometown of Baton Rouge, LA earlier this month, for instance. Several attendees were asked about their admiration for Trump and the answers were instructive:

“He’s going to help our soldiers.”

“He’s gonna take care of ISIS. He’s gonna bring jobs back to everybody.”

“What I’ve been hollering at my TV for years is what Trump’s been saying…We’re going to move the country into a great America again.”

I’ve no interest in disparaging any of these people, but let’s be honest: These are not the concerns of serious conservatives or of people interested in monetary policy or worried about the complexities of geopolitics. They don’t have an internally consistent worldview, and so it doesn’t matter if Trump has flip-flopped on entitlement reform or abortion or tax policy.

These people are pissed off, and since they’re confused about the reasons, they gravitate to the man articulating their rage with perfect clarity. Not one of the voters in that video could explain how Trump is going to accomplish any of these things. I know that because Trump has made no effort to explain it – and he doesn’t have to. Trump understands that working-class whites are losing not to brown or black people but to the apostles of neoliberalism, who have helped gut the middle class here and elsewhere for decades. But they appear not to know that, and he’s exploiting their angst in the most cynical way imaginable.

Rubio and Cruz aren’t wrong about Trump – he is a shape-shifting con artist. But saying so won’t make him less popular. And trying to beat him at his own game is futile – he’s better at it. As I wrote previously, Trump “grasps the conservative psyche and he knows how to whip people into a frenzy.” Everything else about Trump is afterthought. He’s got the mob at his back, and Rubio and Cruz do not.